These basketball coaching tips might mean the difference between a good season and an awesome one. Please read on.

At any practice for a youth basketball team, you’ll likely see coaches working on many of the same things:  team defense, shooting form, offensive plays, the triple threat position and more. Many basketball fundamentals are covered in some fashion by nearly all coaches. How coaches teach those fundamentals and reinforce them, go a long way to establishing player development and team effectiveness. Great coaches seem to be able to put together the right formula for getting their players ready for games.

Likewise, during games, some coaches just seem to have a knack for knowing what to do. Perhaps they learned from a great coach or are keen students of the game.  When a game is on the line, they make great decisions and their decision-making and tactics have a positive impact on the game’s outcome. 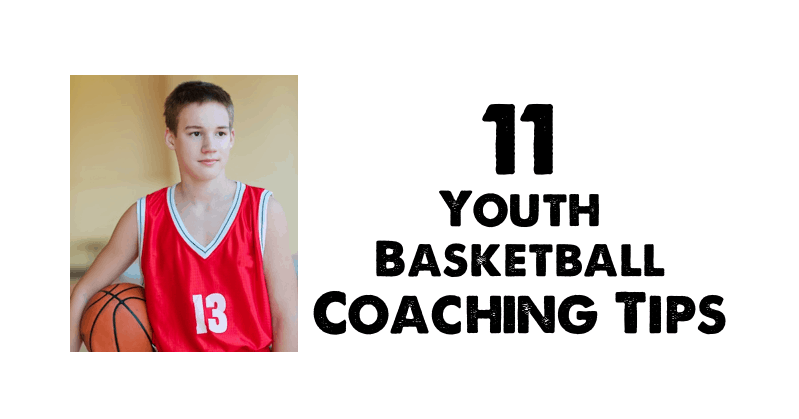 1. Examine match-ups and take advantage of favorable ones.

Great coaches look for advantages. If the other team’s front line is taller at every position than your team, but your guards are taller, consider posting up your guards on offense. If your center has a speed advantage over the person guarding her, pull her out, feed her the ball and let her drive around the slower opponent. As a head coach, you might assign an assistant coach to highlight where the advantages are in match-ups so that you can focus on overall team management during the game.

2. Use the warm-up time before games productively.

Without wearing your team out, you can still cover a lot of topics in some pre-game warm-ups. Don’t be afraid to review key concepts, inbound plays, zone offense, etc., during this time. If you add up all your pre-game, warm-up time over the course of the season; it’s a significant chunk of time. Prepare and use it wisely.

There are lots of good reasons for a coach to call a timeout. You may want to slow down a scoring run of the opposing team, rest your players after a tiring stretch, switch your offense or defense approach, or prepare your team for a critical possession. Don’t lose sight of the opportunity to call a timeout to simply save possession of the ball.

Some examples: if your team has nearly exhausted the 10 seconds it takes to get the ball over the half-court line when the other team is pressing, or a player is double-teamed in a corner with no good passing options, or your player gains possession of the ball but is laid out on the court without his feet on the ground. Using timeouts to save a possession here and there might be the difference in winning or losing a tight game.

4. Teach your players how to steal!

For many teams, especially at younger ages, some of the best open looks players will get at the basket will come as a result of defense. Teach your players how to steal off the dribble, including which angle to take and how to tip the ball without fouling. Also, teach them to anticipate passing angles. A dominating defensive player can wreak havoc on the opposition.

A team that switches defense throughout the game makes it hard on the opposing team. A coach should always be looking for the right opportunities to make a change in defense. When the opponent’s best ball handler is taking a break might be the time to apply a full-court press.

When your full-court press has worked a few times and the opposing coach calls a timeout to address it; it might be the time to fall back into a different defense, and then come back to the full-court press later in the game. Facing an athletic team with speed? Force them to drive through a half-court zone defense or take long outside shots.

Most coaches teach plays for inbounding the ball underneath their offensive basket and have structured plays for inbounding against a press after a made basket against their team. But not enough coaches practice sideline inbound plays. For the team with the ball, it can be a high-risk pass for the player throwing it in.

A stolen pass can mean an unguarded lay-up for the opposing team. Well-constructed sideline inbound plays can put the defensive team on the defensive, and at a minimum, reduce the risk of turnovers.  Here’s one for older teams from Bob Hurley.

7. Coach players to be careful of long passes.

With younger teams especially, longer passes frequently lead to turnovers. For passes over 15 feet long, have your players ask themselves 2 questions: 1.) Will the completed pass give our team a distinct advantage? 2.) What is the probability that the pass will be completed? If the answer to #1 is “no,” don’t throw it. If the answer to #2 is not 90% or higher, don’t throw it.

8. Review and practice the post-game handshake.

The post-game handshake happens (or at least should happen) at the end of each game. It makes sense to practice this and get it right. It can be embarrassing for a player, parents, team, and community if some players don’t handle this component of the game well. More importantly, players should learn good sportsmanship.

Teach players the 3 components of a good post-game handshake: 1.) Look players in the eyes, 2.) Shake hands, bump fists or some type of shake, and 3.) Say something positive in the form of a compliment to the opposing player, e.g. “good game” or “great rebounding.”

9. Recognize the importance of the first pass on offense — Basketball Coaching Tips

The hardest pass to complete on offense is usually the first pass. For many teams, the first pass goes from the point guard to a wing near the sidelines. Teams learn to anticipate this and will aggressively look for steals.

What does a good coach do? Mix it up. Avoid patterns by sometimes passing to the post, sometimes to the wing, sometimes have the point keep it off a pick, or just replace positions with the wing. Also, when you pass to the wing, some of the time the wing should be coming off of a pick. Receivers need to create separation via hard cuts. The passers and receivers should work on fake passes and back cuts. Don’t be predictable and pay extra attention to the first pass in any possession.

10. Make your players excited to come to every practice.

Finish each practice on a high note with a drill or exercise that you know the team likes. It will help them look forward to the next practice. Know when to press your own team with hard practices and when to ease up. Make practices fun. Find players doing things right in practices and games and call them out. Like coach Don Meyer said, “Shout praise and whisper criticism.”

The biggest difference between average coaches and great coaches is that great coaches come ready with well-thought-out practice plans. You know you can’t cover everything at one practice, so you need to put a priority order to the key topics you’ll be teaching at practice. I always start with team defense and individual defense with the thinking that if we can slow down the other team’s scoring, we can stay with them. Be featuring one key concept at each practice, kids are more likely to retain what they’ve learned. Other topics are covered but to a lesser extent.

For the season, I’ve thought through the order I want to teach other key aspects of the game, e.g., offensive moves to the basket, breaking a press, rebounding, ball handling, etc. One practice might have a focus on offensive moves to the basket, but then previous practice topics like team defense might be reinforced via drills and activities. Balancing the need for repetition to learn with kids’ desires for it not to be boring is where the art of good coaching comes into play.

The net result:  an overall plan for the priority order of key concepts as well as each individual practice scheduled out by the minute. Some flexibility is built into each session so that I can make changes based on my assessment of the team’s performance in the most recent game(s) and the overall team’s esprit de corps.

By having a plan in hand when I come to practice make it so much easier. I can focus on coaching in the present without having to think about what activity we’re going to do next, and how I’m going to set that up. Come with a plan. It makes a big difference. Here is the practice plans our team used when we won the Minnesota State Championship: Well Prepared Coach: 30 Youth Basketball Practice Plans.

Mike has authored three books on basketball coaching and is the founder of Sports Feel Good Stories.