And then there were four:  Connecticut, Florida, Kentucky, and Wisconsin.  To get to this point, the Men’s NCAA Basketball Tournament has already delivered some shining moments, as it does every year.  Here were some of our favorites.

The Best from the NCAA Men’s Basketball Tournament 2014

1.) St. Joseph’s coach Phil Martelli’s grandson does some coaching of his own.

Phil Martelli’s grandson, Phillip, imitated his grandfather coaching from his perch a few rows behind the St. Joseph’s bench during St. Joe’s NCAA tournament games.  The four-year-old wore a sport coat, an adult-sized tie and had easy access to his whiteboard just like most coaches do.  When grandfather Phil crossed his arms, Phillip did too.  When Phil watched the game pensively with his hand at his chin, Phillip did too.  His spot-on impersonation of his grandfather made for some great TV moments and earned Phillip an on-air interview. 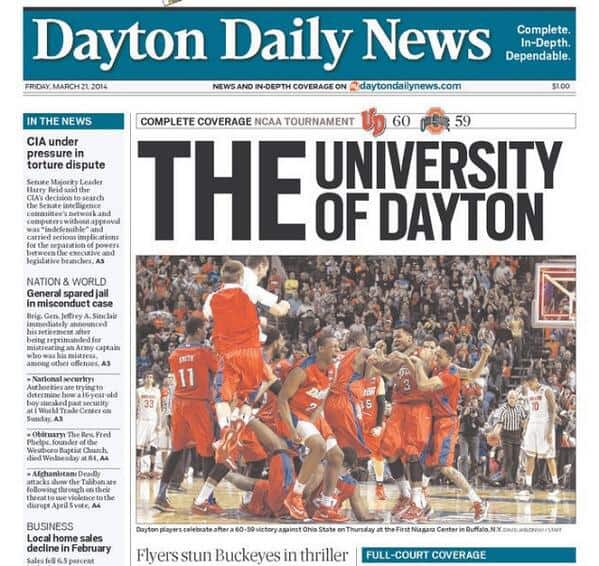 At televised NFL games, Ohio State alumni playing in the NFL frequently indicate that the college they attend is “THE Ohio State University” with an emphasis on “THE.” So, when the Dayton Flyers upset the Buckeyes in this year’s tournament, Dayton Daily News used the playful headline, “THE UNIVERSITY OF DAYTON,” with the “THE” is very big type.

The Flyers had an impressive run to the Elite 8 before losing to the tournament’s #1 overall seed Florida.

3.) Mercer upsets Duke and does the NaeNae Dance

When #14 seed Mercer upset #3 seed Duke, there was only one way to celebrate:  The Nae Nae Dance.  Mercer senior guard Kevin Canevari is the featured performer in the video below.  The dance enjoys some popularity in Atlanta and is based on a character from the TV show Martin.

Freshman Kentucky Aaron Harrison calmly drilled a difficult 3-pointer to lead the Wildcats into the Final Four by beating Michigan in one of the best games of the tournament.

The shot heard around Kentucky – video

It’s hard not to root for the Wisconsin Badgers this year.  It’s Bo Ryan’s first Final Four appearance and very well deserved.  Here’s a coach who has done it the right way. It will also be the first Final Four for Bo without his father Butch.  Read the ESPN story.

The player of the tournament thus far has been 7′ junior Frank Kaminsky.  Kaminsky, who didn’t see much playing time in his freshman or sophomore year, has bloomed into a star of stars.  While maintaining his outside game honed by playing guard in high school, Kaminsky has demonstrated a post-game and an ability to create his own shot off the dribble.  Earning nicknames like “Frank the Tank” and “Mount Kaminsky,” this Badger has led his team to Texas and earned a name for himself in the process.