Lather, rinse, repeat. The 2019 Minnesota All Hockey Hair Team video is here again. Like an old friend that you haven’t visited within awhile, it’s always good to see.

And, with much of the U.S. experiencing one of the snowiest winters in some time, it couldn’t have arrived at a better time.

On a bittersweet note, this is last year creator John King is planning to prepare the production – The Grand Flownale. While recent years have brought many imitators, any serious viewer of the hockey hair series knows that the writing and voiceover work is what makes these beauties a must-watch.

Hats off to Mr. King for his contribution, and now time to visit the salad bar where hair fashion collides with hockey.

Check out: The Story Behind Hockey feature.

What Is Minnesota All Hockey Hair Team?

Released each year in March after film footage – mostly from pre-game introductions – has been collected from the Minnesota High School Hockey tournament, the proclamation of the team is featured in a 4 – 7-minute video. Oh, and the commentary tends to be worthy of several laughs.

Since the first video, players, coaches and team managers have picked up on what it takes to be featured in the video. So, in addition to maybe winking at the camera or giving a shout-out to their mother with a “Hi Mom” as their name is introduced, some will take the opportunity for some hair flips and preening.

As such, the introduction skate out to join teammates has taken on a life of its own with this annual video tradition.

Creator and Announcer of the All Hockey Hair Team Videos

Advertising exec John King is the creator and provides the voiceover work. His wife and children apparently help him in the undertaking. Sports Illustrated, Yahoo Sports and ESPN have covered this unique tradition. Even the Wall Street Journal has profiled this tribute to hair video series.

The 2018 film captured the essence of feature:

“Texas has their Friday Night Lights and Indiana has their Barnyard Hoops, here in Minnesota, it’s the Land of Ten Thousand locks: hockey is king!”

Each year the All Hockey Hair Team video generates millions of views. With each successive year, King adds non-profit sponsors and new twists. The popularity of the series continues to increase each year.

To understand the video, it helps to understand some of the hair terms that hockey players use. So, here we go:

Flow: Curly, wavy or long hair that “flows” back from your bucket.

Salad: Hair. (You know, the Eskimos have 50 words for snow. Before long, hockey players will have 50 ways to say, “Hair.”

Flowlicious: When your hair be looking good.

Dual Exhaust: A feature of some mullet styles where two puffs of hair come out from the back behind the ears.

Frost: To bleach your hair.

Mullet: Hairstyle with hair cut short in front and on sides, but left long and flowing in the back. “Business in the front; party in the back.” Also known as a “Kentucky Waterfall.”

Tossing the Salad: When your hair moves which can come about from a hair flip or movement, e.g. skate fast and stop.

The Tourney is the largest state sports tournament in terms of attendance and viewing. It’s bigger than the Indiana basketball tournament and the Florida football competition.

In 2006, the average attendance for championship games was over 18,000 per game. The Florida Panthers, an NHL franchise, averages about 11,000 fans per game.

This is the 75th year of play.

From quarterfinals on, all tournament games are televised across the state.

13 of 20 U.S. men’s team players from the Miracle on Ice were born in Minnesota.

Herb Brooks, Coach of the Miracle on Ice team had this to say about The Tourney, “Of all the thrills I’ve had in hockey — playing and coaching in the Olympics, winning NCAA titles, coaching the Rangers — I can honestly say the biggest was winning the Minnesota State High School Hockey Tournament.”

Some 6,500 high school players participated in hockey across the state. There are about 55,000 players of all ages registered with USA hockey.

Minnesota is sometimes called the 11th Province of Canada because of its weather and Minnesotans’ passion for hockey.

The Burnsville Blaze prepared their own hockey hair video to prepare for sections. While the hair improvements are noticeable, unfortunately, they didn’t advance.

King’s string of videos, has created a new genre of videos, stories, and photos on YouTube, Twitter, and Broadcast TV. ESPN SportsCentre got in the action with “SportsCentre Top 10 Hockey Hair.”

State Tournament attendees contribute by posting Instagram photos of All Hockey Hair Team candidates. The buzz, so to speak (sorry), is bigger than ever.

Teams of Note in the Tourney This Year

After a nine-year run of making the State Tournament, Hermantown didn’t pass their sectionals test. But, it was a great run.

A military prep school that typically requires shorter haircuts of its student body, King once noted, “We know this team will never win” referring to the Hockey All Hair Team competition. But, this year was an exception.

The #2 team you love to hate. A traditional powerhouse in football and many other sports, they can also play the puck with the best.

An outstate team from up north that seems to always find the way to the state tournament.

Ah, the #1 team you love to hate (think New England Patriots). King refers to the Hornets as, “The small town on the west side with a dream,” while most others call them, “The Cake Eaters.”

The common thread for other Minnesota communities:

But, the Edina Hornets prevailed over the Eden Prairie Eagles 3-2 in overtime in this year’s AA Championship game. Edina earned their 13th State Championship title.

• There’s some speculation he took a dive to make the team. Watch the short video and decide for yourself.

A Hall of Fame Moment.

I can’t get over Hamish Watson’s hockey hair… #scotvwal pic.twitter.com/9skXPMeZBj 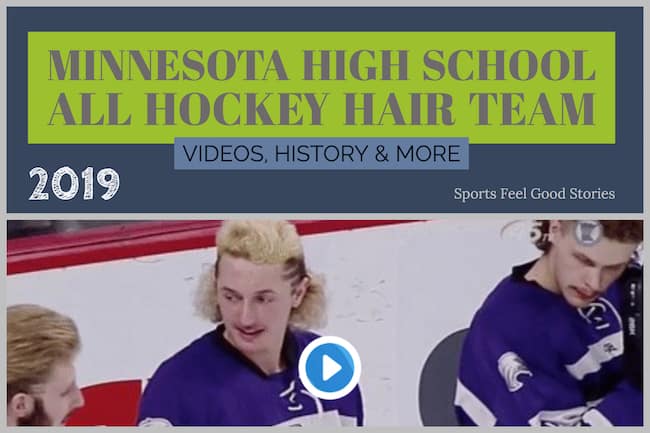 You’re on the 2019 Minnesota All Hockey Hair Team video page.

A History of Minnesota All Hockey Hair Team Videos