Irish dog names have a rich history on the Emerald Isle. Dogs were and continue to be held in high esteem.

Dog owners want the names of their dogs to do three things:

1.) Be memorable,
2.) Be appropriate for the type of dog, and,
3.) Have the quality that might put a smile on your face when you say their name.

In addition, Irish dog names should create a memory of the Emerald Isle or evoke some vision of the Irish culture and countryside. Our canine experts sat down and compiled a list of the 16 top Irish dog names. You should start here if you’re in a hurry.

2.) Killarney – A town in southwest Ireland in the county of Kerry. Birthplace of the Kerry Blue Terrier.

4.) Finnegan – Light or fair colored, perfect for a dog with a lighter colored coat.

5.) Guinness – Named after the century’s old brewery, great for a black and tan dog.

6.) Cork – Derived from the Irish county of the same name.

7.) Ginger – A nickname for a red-haired person or the name of an Irish Setter.

8.) Murphy – A family name that refers to brave sea warriors but is also responsible for Murphy’s Law…” If anything can go wrong, it will.”

9.) Shamrock – The classic symbol of the good luck of the Irish.

10.) Boxty – A culinary favorite, boxties are like potato pancakes.

12.) Celt – The Celts were a nomadic tribe of Indo-European descent that settled in the British Isles around 500 B.C.

13.) Blarney – The name of a castle in County Cork where it is believed to bring luck when you hang upside down and kiss a special stone.

14.) Red – Like Ginger, very appropriate for a red-haired dog.

15.) Flannery – The family name means full of valor but may also refer to red eyebrows.

16.) Dublin – On Ireland’s east coast and the capital city.

Now when you call for your dog to come to the dog park, you may have to do it with an Irish brogue. 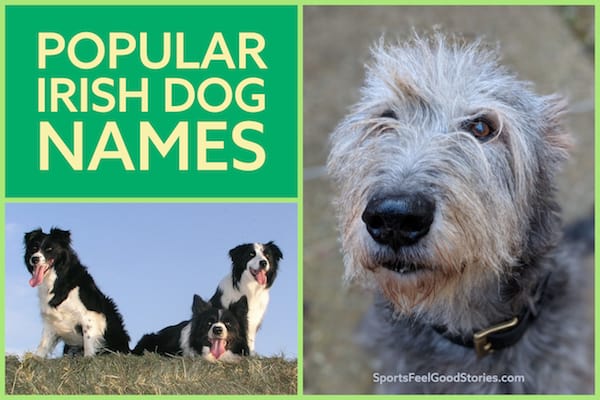 Here is a list of female dog names that reflect popular girls’ names in Ireland. In addition, names like Bailey and Lassie consider popular culture references. Look through these names and maybe you will find one that fits your pooch or perhaps it will give you inspiration for a whole new name.

17.) Bailey – Can be used as a girl’s or boy’s name and is most familiar from Baileys Irish Cream Liqueur.

18.) Erin – Not unlike Colleen below, it means from Ireland.

19.) Lassie – From the famous movie dog Lassie, who was always trying to tell humans that Timmy was trapped in the well.

20.) Colleen – It means girl of Ireland, apropos for an Irish dog name.

21.) Riley – Valiant and also living large like, “he’s living the life of Riley.”

22.) Teagan – Attractive, beautiful, and perfect in every way, great name.

23.) Kelly – The most common name in Ireland it means smart or bright headed.

24.) Maggie – An abbreviation for Margaret and technically an English name, but it could also be a Knick name for Maureen a classic Irish name.

26.) Eileen – This person shines bright; it is also the name of a song by an Irish band Dexy’s Midnight Runners that became a Pop Hit in the 1980s.

27.) Shannon – Someone who is old and wise and gives good advice.

29.) Glenda – Just like the witch of the same name in The Wizard of Oz this is a person that is fair and good.

31.) Tierney – The Irish word for the master or lord, a stately name for a dog. 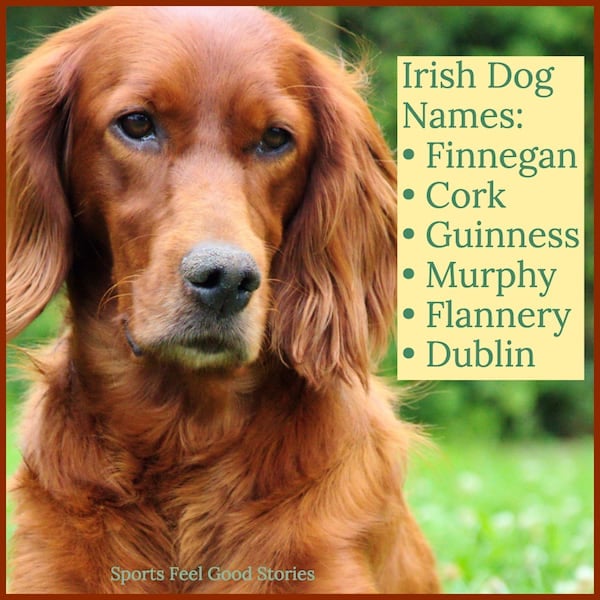 These names are great for the alpha dog leader of the pack. They also reflect popular Irish boys’ names and Knick names. All these names should put a smile on your face and make your dog come running when you call him. Some of these names date back centuries while others are more current.

32.) Cody – This name can be traced to the 13th century and is derived from a Gaelic word that means wealthy.

34.) Laddie – Although technically Scottish, the name can also fit an Irish dog and means young man or boy. If you had a male and female dog, Laddie and Lassie would be awfully cute.

35.) Rory – Who wouldn’t want to name their dog after an Irish multi-major golf tournament winner who is young and handsome.

36.) Shep – Short for a shepherd, technically English, but with so many shepherds in Ireland, the name is appropriate. Great for a German Shepherd or a Border Collie.

37.) Rusty – Perfect for a dog with a bright red coat and a confident and comfortable name for a male dog.

38.) Seamus – The name Seamus grew out of the English name James and is a very popular Irish name.

39.) Liam – This is a shortened version of the Irish name Uilliam, it is also a shortened adaptation of the name William and the first name of well-known actor Liam Neeson.

40.) Connor – A very suitable name for a dog since the meaning of the name is “lover of hounds.”

41.) Colin – The name has been interpreted as meaning cub or whelp and originally comes from the Irish name Cullen.

42.) Flynn – The name means a reddish or ruddy complexion perfect for a red Irish male dog.

43.) Gallagher – Although it is a surname, it is an excellent name for a male dog and conveys a stately lad.

44.) Duffy – Again a surname meaning, dark, black, or swarthy perfect for a male dog with a darkish coat.

45) Sullivan – Also a last name, but a great name for an Irish Setter or Irish Terrier.

46.) Padraig – The Irish version of Patrick and the name of famous golfer Padraig Harrington, born in Dublin, Ireland.

Around one million people in Ireland can still speak the old Irish Gaelic language and an additional 20,000 in the United States. Gaelic is from the Celtic and Indo-European collection of languages and evolved into Middle Irish and eventually the Modern Irish we know today. We have selected these short Gaelic words as good potential names for Irish dogs.

48.) Slantè – Pronounced Slawn-Che. It means to your health or Cheers!

49.) Maith Thú – Pronounced Maw-Hoo. It means good to you or well done.

50.) Beagáinin – Pronounced Byug-Awn-Een. It means little or a small bit, great for a little dog.

51.) Madra – Pronounced Mad-Rah. It means a dog or house dog. It is sometimes used to describe other animals like madra rua means “red dog” or fox, madra ulsce or “water dog” for an otter, madra muc or “pig dog” for a pig, and so on.

54.) Banphrionsa – Pronounced Bahn-Free-Onsa. It means Princess and shortening it to Ban, it could be a great female dog name.

55.) Banrion – Pronounced Bahn-Ree-On. It means Queen and could also be shortened.

56.) Scáth – Pronounced Skawth. It means shadow and would be excellent for a dog with a dark coat.

57.) Aiteall – Pronounced At-Ell. It means fine weather between a couple of sessions of rain.

Names based on Irish Whiskies

What is more Irish than a wee spot of Irish Whisky and these five Whiskies are all classics that any dog would be proud to be named after.

63.) Jameson – An Irish whiskey that is popular all over the world.

64.) Bushmills – Another well-known Irish whiskey that is often finished in Bourbon barrels.

You can pay tribute to your favorite Irish Singer or band by naming your dog after them. Here is a list of popular Irish Singers and Bands any of which would be a good candidate to name your dog after. Pick one or use the names as inspiration to come up with your own name idea.

65.) Bono – Lead singer of the band U2, this would make an excellent name for a dog.

66.) The Clancy Brothers – Clancy would be a great male dog name.

68.) Sinead O’Connor – Either Sinead or O’Connor would make a good name for a dog.

69.) Cranberries – Another good name for a dog with a red or auburn coat.

70.) Pogues – Shorten the name to pogue which means “kiss” in Gaelic.

71.) Gemma Hayes – Another name where the first or last name could be used.

72.) Flogging Molly – The band name isn’t really politically correct, and we could speculate about what it may mean, but Mollie is a great name for a female dog.

73.) The Irish Rovers – Perfect, name your dog Rover and it is a great dog name and an homage to the band.

History of Dogs in Ireland

The history of the Irish people and dogs goes back centuries to the Celtic people that settled in Scotland, England, and Ireland. Dogs were used for hunting and as companions and several dog breeds originated in Ireland.

Irish legend has it that the great Celtic hounds were bred to be the guard dogs of roads and homes of the Celtic people. But the Celtic Hounds weren’t the only breeds to come from Ireland, it was also home to the famous Irish Wolfhound.

The Wolfhound is the tallest dog in the world with a male standing at 34 inches tall, bred to hunt wolves, the breed almost disappeared when wolves went extinct in Ireland. One of the most popular Irish breeds is the Irish Setter.

With its beautiful red coat and friendly demeanor, it is in high demand. Along with the Irish Setter is the Irish Red and White Setter, it is even older on the breeding timeline than the Irish Setter and shares the same build and personality.

Four different terriers come from Ireland, The Kerry Blue Terrier, the Irish Terrier (the only all-red terrier in the world), the Soft Coated Wheaten Terrier and the Irish Glen of Imaal Terrier. All four breeds were bred to hunt and kill vermin like mice, rats, and squirrels and all of them do their job well.

There are two more breeds from Ireland, The Irish Water Spaniel which has a thick waterproof coat and a unique rat-like tail. The ninth and final breed is the Kerry Beagle, it is very distinct from the beagles we see in the United States. It is more like the American Coonhound and the Celts used them extensively for hunting. This breed is almost as old as the Irish Wolfhound.

It is traditional to parade with your dog on St. Patrick’s Day (perhaps not in Ireland, but for sure in the United States.)

Tim is an unabashed dog lover. He loves all kinds of dogs but has a special spot in his heart for big dogs, the Irish Wolf Hound is one of his favorites. His family raised and bred Doberman Pincers and at one time they had three adult Dobermans in the house. His friends were a little afraid to come over, but as dog lovers know, Dobermans can be the sweetest dogs. It’s all in how they are raised. One of the names on this list was Maggie, and Tim says she was the best dog he has ever owned. Maggie was a rescue dog that was smart as a whip and couldn’t have been more affectionate.