With a new contract in hand, Carson Wentz’s net worth stands ready to take off in 2019. The Eagles signed Wentz to a new deal that will keep him in his starting quarterback role with the team, and at a salary that will put him among the very highest-paid quarterbacks in the NFL.

Let’s dig a little deeper into the primary sources of Carson Wentz’s net worth and wealth.

Profession: Quarterback for the Philadelphia Eagles

Estimated Net Worth: Carson Wentz net worth is an estimated $45 Million – and rising!

(Estimate based on a variety of sources) 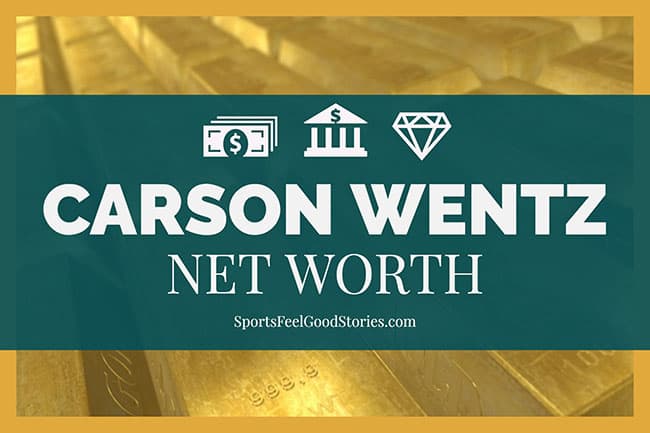 Carson Wentz signed a four-year contract extension with the Philadelphia Eagles in 2019. The $128-million deal includes a signing bonus of $4.4 million and a roster bonus of $3.36 million. The contract’s $107+ million in guaranteed money is a new league record. It tops the previous high-water mark paid to Russell Wilson ($107 million guaranteed).

The promising young quarterback is coming off two straight seasons being sidelined by injuries. In 2017 he suffered a torn ACL at the end of a fantastic season for him and the team. The injury kept him out of the playoff run and eventual Super Bowl victory.

The next year, a stress fracture in his back kept him from completing the season and helping the Eagles in the playoffs.

Video: Carson Wentz is excited about his new contract:

Grateful for this opportunity and excited for the future! 🙌🏻 #FlyEaglesFly #AO1 pic.twitter.com/1Cxn12lciD

The Eagles doubled-down on Wentz’s future when they allowed Super Bowl MVP Nick Foles to leave in free agency last year. The team has full faith in Wentz and backed it up by paying him with his new contract extension.

When healthy, Wentz is one of the most dangerous quarterbacks in the league. The Eagles are betting on his athleticism, leadership, and good health for many years to come.

Carson Wentz came on the scene with immense popularity during his rookie year. For a time, his jersey was the number-one seller in the NFL. The latest rankings from nflshop.com show Wentz’s #11 jersey is the eighth-best selling uniform in the league.

Early in his career, Wentz signed a deal to be a spokesman for NRG, the energy company. The company operates the solar panels and micro-wind turbines used to power the Eagles Lincoln Financial Field in Philadelphia.

His newly-signed extension should put him squarely among the top-paid quarterbacks in the league. At $32 million per season, Wentz will be positioned fourth behind only Russell Wilson, Ben Roethlisberger, and Aaron Rodgers in average annual salary. Watch the Carson Wentz net worth begin to climb quickly.

Super Bowl champion quarterback Tom Brady of the New England Patriots is conspicuously absent from the top five list above. But don’t feel too bad for Tom. In 2018, Brady earned approximately $20.5 million.

Check out these hilarious Carson Wentz fantasy team names you can use in your fantasy football league.

Wentz attended Century High School in Bismarck, North Dakota. Like a lot of the most talented athletes, he was a three-sport star, playing football, basketball, and baseball. On the football team, he played both quarterback and defensive back. He graduated with valedictorian honors in 2011.

Carson Wentz became the starting quarterback for the North Dakota Bison football team during his junior year. He led the team to a 15-1 record and a win in the NCAA Division I Football Championship game. He and the team continued their dominance during his senior year. They completed the season with a fifth-straight FCS Championship. Wentz was named the game’s Most Outstanding Player for the second year in a row.

The Philadelphia Eagles selected Carson Wentz in the 1st round of the 2016 NFL Draft. He was the #2 overall pick that year. The selection became the highest ever for a FCS player.

Wentz signed a four-year deal with the Eagles in 2019. He is scheduled to become a free agent in 2025. But if all goes as planned, the young superstar will be tied to the Eagles franchise for many years to come.

Carson Wentz took over the starting quarterback job in Philidelphia after Sam Bradford was dealt with the Minnesota Vikings in 2016. As the Eagles starter, he threw for a league-record 379 completions for a rookie quarterback. While the team only achieved a 7-9 record, Wentz more than proved he could handle the role of starting quarterback.

The 2017 season finished in bitter-sweet fashion for Wentz. The team won the NFC East Division and progressed to the Super Bowl, beating the New England Patriots 41-33. But Wentz hurt his knee during the Week 14 game against the Los Angeles Rams. The diagnosis: a torn ACL and out for the remainder of the season. A year of destiny for the team would finish without him on the field.

Wentz returned to action the next year, but the team had mixed results throughout the season. The Eagles finished 9-7 and lost in the Wild Card round of the playoffs. When healthy, Wentz has shown consistency and accuracy in his passing ability.

Wentz’s impressive career statistics show why the Eagles continue to believe in the young gunslinger. He throws at a 63.7 percent completion rate and has 70 touchdowns and only 28 interceptions over three seasons.

Wentz and his girlfriend, Madison Oberg, were married on July 16, 2018. He announced their engagement two days after the Eagles won the Lombardi trophy in Super Bowl LII.

1.) The Wentz family lived in Raleigh, NC when Carson was born. They moved to North Dakota when he was three years old.

2.) Wentz travels back to his home state of North Dakota frequently to take part in the hunting season.

4.)  His charitable cause, the AO1 Foundation (Audience of One Foundation), is inspired by his Christian faith and helps individuals and communities around the world.

We found a wonderful quarterback and person a few years ago. He’s everything you want in a franchise quarterback, to be able to plan ahead and know exactly that he’s going to be with us and build the roster in just the way that we want to do it, it means everything. It allows you to make smart decisions. We always wanted a terrific quarterback and a terrific person, and he embodies it in every way.

In this league, a lot of things revolve around your quarterback and for us to be blessed to have moved up the draft board to get Carson to the number two spot and now to extend him gives us stability on offense, gives our organization stability, I’m excited about that and the chance to continue working with him.

That is all part of the maturation process and a growth process. It is something that you learn through time. I watched it with some of the greatest quarterbacks I ever played with. I saw it with Dan Marino, I saw it with Brett Favre. Guys that, for them to become better teammates, they embraced the entire team and take on that personality. Then people follow. Carson has that in him, he has that in his DNA, and that is what we are excited about.
On Wentz becoming a better teammate.

He is coming into his fourth season. He and I are tight…Part of my job is to help all the players on the team become better teammates. That is part of my job. I am looking forward to working with him again this season.

There is just something about being out in the open country, about seeing the sunrise over a pond, that’s really beautiful.

Honestly, I’ve always loved cheesesteaks. They’re kind of my go-to when there’s nothing else to have at restaurants, but obviously it’s a little different when you’re out in Philly and have an authentic Philly cheesesteak.

I actually hated hunting the first time I went when I was a kid. My dad took us deer hunting. We sat there for 30 minutes, and I felt like I was losing my mind. But in college, I fell in love with it. Football became a full-time job, and I needed an escape. I needed something that would mellow me out.

Names that come to mind that I’ve learned from are Tom Brady – the way he gets the ball out and is so decisive. You can tell he is in total control out there. Another name is Aaron Rodgers, and how he’s in total command. And also, Cam Newton, the way he has fun. I love that part of it.

I know we’re not going undefeated. I know I’m not going to throw a touchdown every game.

Timing and accuracy is really what matters at the end of the day.

I hate losing, and I’m gonna do whatever it takes to be the best at whatever it is I’m doing.

I can make all the throws. My mental side is a strength as far as understanding defense schemes and our playbook. I’m able to change plays when needed. I think that sets me apart.

You just control what you can control and just hopefully go win games and keep getting better.

A lot of guys have tons of talent, but it boils down to the mental side of things. Preparing and knowing your offense and studying the defense. Being able to read and react quickly. The mental side is often overlooked.

I remember just praying, ‘Dear Lord, please let me grow to be at least 6 feet.’

When you come in as the second overall pick, the last thing you want is for guys to think you believe you’ve made it. Because that’s the farthest thing from the truth.

I’ll be in a cadence, and I’ll start to see one thing that a defense is starting to do, I’m like, ‘I saw that two months ago on film.’ And then that triggers whatever call you need to make.

If you can play, you can play – and I know I can. If anyone wants to doubt that, heck – I’m more than ready to prove you wrong.

I’m a competitive son of a gun. I don’t like losing. I want to be the best out there.

Playing football in Fargo has a total big-time feel. Everyone says it’s FCS and it’s a smaller school, but in Fargo, North Dakota, and in the state of North Dakota, NDSU football is the real deal.

Young quarterbacks usually experience bumps in the road. I’ll take them in stride.

Greg and Mike both live in Minnesota which makes them practically neighbors with Carson Wentz. Ok, that’s a stretch. Both write about football, fantasy football, and other sports.

Or, these other NFL stars’ net worth & quotes pages: 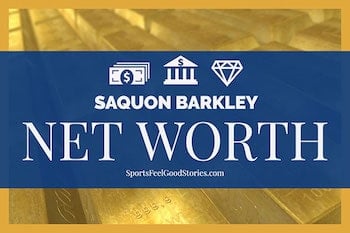