Let’s take a look at Drew Brees’ net worth and some of the sources of his wealth. And, along the way, we’ll examine some of his accomplishments, quotes about him and by him, as well as some fun facts.

The Super Bowl-winning quarterback for the New Orleans Saints turned 40 in 2019. Over his eighteen-year career, he has stacked up Hall of Fame-worthy statistics, winning seasons and an ever-growing fan base. Here are some of the details of his net worth, NFL salary and endorsement deals.

Brees signed a two-year contract with the New Orleans Saints in 2018. The $50 million deal includes a $13.5 signing bonus with $27 million guaranteed. The 40-year-old quarterback is currently at the top of his game, completing 74.4 percent of his passes in the 2018 season. Will he be able to maintain his exceptional play another few years? If the Saints believe so, they will want to sign him to another attractive short-term deal before he calls it quits.

The future Hall of Famer has made it clear he wants one more season. But after that? It might depend on what the team accomplishes in 2019. The team is stacked with talented personnel and stands poised to dominate once again. If they can make another run at the Super Bowl and win it, that might make the perfect last act for Brees as he rides off into the sunset.

At some point early in the 2019 season, Brees is likely to become the first quarterback in league history to break through the 75,000-yard career passing mark. That’s over 42 miles in distance! He is also close to overtaking the most all-time passing touchdowns record as well; his 520 touchdowns are second only to Peyton Manning’s 539. 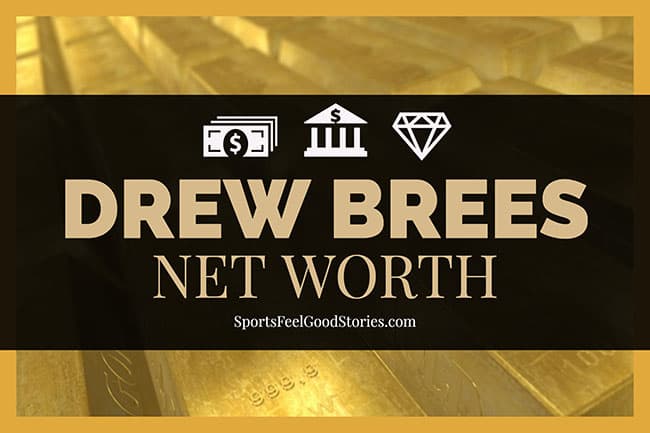 Brees has made a substantial amount of money through endorsement deals throughout his career. He currently has over a dozen deals, including Pepsi, Procter & Gamble, Verizon, Microsoft, AdvoCare, and Wrangler. According to Forbes, Brees earns over $12 million each year from endorsement income.

His charity, the Brees Dream Foundation, gives millions of dollars each year—and over $25 million to date—to worthy causes and academic institutions in his “home towns” of New Orleans, San Diego and West Lafayette, Indiana (home of Purdue University).

Brees is into fashion too. His apparel company is called NINE and sells locally in New Orleans and online. Nine percent of all profits at the shop go to his Brees Dream Foundation. In 2017 he invested $30 million in shirt maker UNTUCKit.

While Drew Brees does not make the top five highest-paid list above, he does earn more per year than Super Bowl champ Tom Brady of the New England Patriots in terms of NFL salary. In 2018, Brady earned approximately $20.5 million to Brees’ $25 million.

Name your fantasy football team after the New Orleans QB! Here are some funny Drew Brees fantasy team names to get you started.

What’s not to like about Drew Brees? He’s the classic underdog — undersized and under-appreciated (after leaving San Diego earlier in his career). Brees is a family man who’s embraced New Orleans as his home town.

He’s stuck around through free agency offers that might have paid substantially more for him to move to another franchise. And he’s brought a Super Bowl trophy home to his adoring fans.

And that popularity is reflected in his jersey sales, which rank consistently high each year. The latest data from nflshop.com shows Brees #9 jerseys are the sixth-best selling uniform overall in the league and the second most popular quarterback jersey behind only Tom Brady.

Brees lettered in baseball, basketball, and football on varsity teams at Westlake High School in Austin, Texas. In football, he led the team to a 16-0 record and a state championship. Even after finishing 28-0-1 as a starter after two seasons, Brees was not heavily recruited and did not receive offers to play at his preferred schools (Texas and Texas A&M).

Check out Patrick Mahomes Net Worth page for a look at another Texas high school quarterback.

The only two offers Brees received to play college football were from Purdue and Kentucky. He chose Purdue and started at quarterback by his sophomore year.

The San Diego Chargers selected Drew Brees in the 2nd round of the 2001 NFL Draft. He was the #32 overall pick that year. Brees played for the Chargers through 2005 when the Saints picked him up through free agency.

Brees signed a two-year deal with the Saints in 2018. He is scheduled to become a free agent in 2020 unless the Saints are able to resign him or he decides to retire.

The Chargers quarterback situation in the early 2000s was chaotic. They flipped between veteran Doug Flutie and Brees for a few years before acquiring Philip Rivers after the 2004 NFL Draft. Brees would eventually move on from San Diego and sign a free-agent deal with the New Orleans Saints.

His career in the Big Easy is legendary. Honors include the Walter Payton NFL Man of the Year in 2006, the Bert Bell Award in 2009, two-time NFL Offensive Player of the Year, and twelve Pro Bowl appearances. His crowning achievement was winning Super Bowl XLIV in 2009 and being named Super Bowl MVP.

Brees and his wife Brittany, his college sweetheart, got married in 2003. The couple has four children, Rylen, Bowen, Callen, and Baylen.

1.) The NFL star quarterback ranks first for touchdown passes in consecutive games with 54.

2.) Legend or fact: Drew Brees was named after Dallas Cowboys wide receiver Drew Pearson. Brees denies it, but Sports Illustrated purports it to be true.

4.) Brees wears number nine on his jersey as a dedication to the Hall of Fame baseball player Ted Williams.

…I don’t want to try to predict it because I might be tired of coaching before he’s tired of playing.
Sean Payton, Saints head coach (On when to make a change at quarterback.)

At 211 degrees, water is just scalding hot. But at 212, it boils. It’s the significance of one degree. Everything about Drew Brees’ preparation is about that one extra degree.
Sean Payton, Saints head coach

With Drew Brees’ face on TV saying New Orleans is coming back, this is my city, this is my home; that coverage made all the difference in the world in New Orleans being the city it is today.
Ron Forman, Audubon Nature Institute

Somewhere between 2006 and 2009, Brees went from being a really good story and a good leader and an MVP type of guy because of everything to ‘Oh, wait a minute, this guy is the next Dan Marino.’
Mike Triplett, ESPN.com

A sure-fire first-ballot Hall of Famer. Drew Brees sets the barometer for every quarterback in this league with the way he performs.
Dirk Koetter, former Buccaneers coach

The Saints made the right decision signing Drew Brees – not just in terms of his arm, but because of his heart and mind.
Marshall Faulk, Hall of Fame running back

It’s like living in New York in 1926 when Babe Ruth was there. Or Chicago in 1995, with Michael Jordan. To actually live in a city where Drew Brees is critical to our lives 16 days a year—it’s stunning. He’s become like the river. He’s just a part of us.
James Carville, political commentator

Brees is a champion who can overcome anything.
Pierre Thomas, Saints running back

I think the thing that is inspiring the most is knowing what is most important to him and that common goal that we have relative to winning another championship. All the actual hardware, the different bats, those all get dust but it’s about these memories right now with someone like that, as special as that is tonight and all that he’s accomplished. That’s what you miss when it is done. But honestly, I think it was winning in the beginning and competing and being relevant. The other things take care of themselves.
Sean Payton, Saints head coach

Sometimes you feel a little awkward piling on these compliments but he deserves them all. Nothing he does should surprise any of us, right? We love him. The impact he’s had on our team, our organization, our city is hard to measure.
Mickey Loomis, Saints GM

You are either getting better or getting worse, but you are never staying the same.

The truth is, you don’t learn much from winning, but losing can make you a lot stronger.

I realized I could focus on my mistakes and feel sorry for myself, or I could learn from those mistakes and use them as motivation to come back stronger.

Forget all the doubters. Forget all the critics. Is there satisfaction in proving them wrong? Sure, but I don’t want to give those people the gratification of even dwelling on their words that long. There’s a motivator much more powerful than doubt. I play in honor of those who believe in me.

When you wake up, think about winning the day. Don’t worry about a week or a month from now — just think about one day at a time. If you are worried about the mountain in the distance, you might trip over the molehill right in front of you. Win the day!

Under pressure, would I fold and disappear, or would I show everyone that when bad things happen, you fight?

But I’ve found that when you start talking to people, everybody’s family has something they’ve dealt with. Every family has issues and is a little dysfunctional. It’s not whether you will have problems within your family; it’s how you handle those difficulties when they come your way.

What I’ve discovered along the way is that the road to success is usually a pretty bumpy one. And there are no shortcuts.

Greg and Mike are part of the editorial board for Sports Feel Good Stories. Big football fans, the two debate the merits of who plays the QB role best: Tom Brady, Drew Brees, or Aaron Rodgers, on a regular basis.