Editor’s Note: This is part of the Sports Feel Good Stories, Red Zone Rick series in which the gridiron guru evaluates fantasy football player potential broken out by team within each of the eight NFL divisions. In this case, he’ll be examining the exciting AFC West.

In the real AFC West, Andy Reid’s Kansas City Chiefs have dominated the decade. Now, with rising star QB, Patrick Mahomes, The Chiefs have their eyes on advancing further in the playoffs to the Super Bowl.

With off-field problems affecting key offensive standouts, is this as powerful as a team as it was just last year? We’ll soon find out as the Chargers and the Broncos will put them to the test. And, well, what about thoabse Raiders. Is Gruden putting together the pieces he needs to get the Raiders back on track? Well, the addition of Antonio Brown is a step in the right direction.

With Tyreek Hill and Antonio Brown, the AFC West features the two best receivers in the NFL.

Let’s take a look at how each AFC team breaks down fantasy player-wise.

The best tight end in the NFL, even if Gronk wasn’t retiring. His value might take a hit though if Tyreek Hill doesn’t return this season (double-teams all day). I would still feel comfortable drafting him early because he is really just that good.

Regardless of how you feel about his off the field issues, this guy is a phenomenal football player. Make no mistake, a very big part of why Mahomes is MVP is due to (the relatively not-so-big) Hill.

The guy is so fast that defenses often need to triple-team him. His speed is just the first thing to watch out for. His route-running skills, his ability to win contested balls, his reliable hands, and his competitive nature all boost him into being quite possibly the most well-rounded and dangerous WR in recent memory. Oh, and he can return punts too… And kicks.

Video: How Fast is Tyreek Hill?

Williams was an absolute lifesaver for the Chiefs last season after they released Kareem Hunt. And he is clearly the man that Andy Reid is expecting to be the brunt of his ground attack in 2019 as well. We didn’t get to see an entire season out of him, so there is a little cause for concern, but with what we did see he sure looked good.

The often-overlooked Hyde is on another new team, but that doesn’t mean he should be overlooked this year. Andy Reid has a way with running backs (and offenses in general) and I would bet my bottom dollar that Hyde is going to have more than just a backup role.

Hyde is great at catching the ball, so if you play in PPR he is graded Silver, but if you play standard he gets a bit of a downgrade.

Are you a believer? Judging by the size of his contract it is pretty clear the Chiefs believe in him. But I can’t say I believe he’s the answer. If Tyreek Hill is gone, his grade gets a boost but I still wouldn’t spend heavily on him.

Patrick Mahomes is the QB. Robinson goes hard on game day. (Again) if Hill is gone, there is some real potential here.

The Tyreek Hill insurance policy. He’s good, he’s fast, but is he ready? Even if he is everything that the Chiefs hope he is, replacing Hill is just not a realistic ceiling for Hardman. But that being said, he certainly is a promising young player and has a shot at becoming the number 1 WR on the most dangerous offense in the NFL.

The motor that keeps the most balanced team in football churning. The Chargers’ defense is stacked; the offense is stacked. And controlling the game literally runs through Gordon. He has turned into a perennial top-5 RB since entering the league 5 years ago.

He started 2018 slow but picked up speed as the year went on. When Rivers needs to get rid of the ball, Allen is the guy. Historically, this has resulted in heaping amounts of targets for Allen at times. He’s a reasonable bet to blow-up in almost every game when Rivers is slinging. You can draft him with confidence.

Philip Rivers is good – he’s really good. Which is why it can be confusing why he makes so many bone-headed throws at times. But then he reminds you why he is so good again. He’s never out of a fight and he has the weapons to remain dangerous at any time. Keep him rolling when he’s hot.

2019 looks like the year we might finally get to see Henry unleashed. He missed the regular season last year but came back for a stint in the playoffs, so he’s healthy and had all offseason to get his mojo back. Don’t be surprised if Rivers finds Henry in the red zone (a lot).

The Charger D is stacked. Their offense can possess the ball reliably. This is a great unit.

Some games he disappears behind Gordon, other games he thrives as a backfield receiver. He isn’t a big guy, he isn’t a big name, but he plays bigtime. PPR formats he is a decent bench stash for a rainy day.

He’s never really turned into the Wide Receiver that he looked like he could be back when he was with the Browns, but Benjamin is a deep-ball hawk so he can turn a small number of targets into big fantasy points.

If you watched Mike Williams at the end of the season, you began to witness what could be the next great WR in the AFC. He is still young and developing, but down the stretch, he really looked like a gem. Don’t feel hesitant about grabbing him in the draft, there’s a great chance that he is a big name come February 2020. 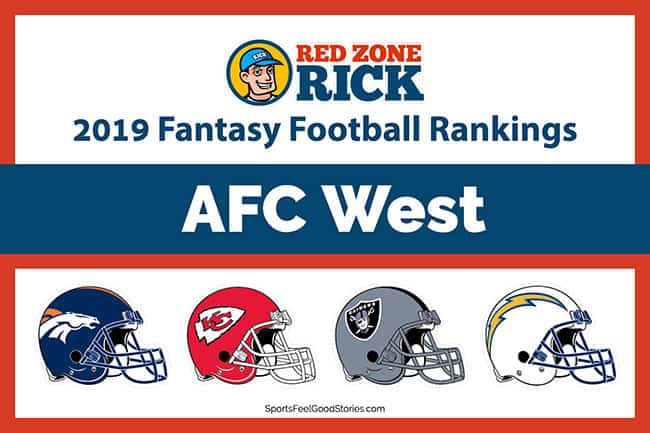 If you started the 2018 season thinking that Phillip Lindsay would be your RB1, good for you, but I’d bet you’re lying. For most of the season, he was Denver’s quintessential running back and finished the season as one of two top rookie backs – the other being Saquon Barkley. That’s good company. He’s that good. He’s your RB1 if you want him (you want him).

Denver’s receiving corps was all over the place last season. And their (previously new) 2018 quarterback is already gone so any chemistry that was developing is already out the window.

But we do know that Joe Flacco is a veteran QB with a SuperBowl ring and there’s a good chance that he’ll find some common ground with his veteran receiver who also has one of those rings.

He started showing some real promise in flashes last season. Denver clearly expects a lot out of him, so it is safe to assume they will get their 2018 second-round selection well involved this year. Probably sooner rather than later.

We know Joe Flacco is pretty good, but will he be good enough? Case Keenum is an extremely mobile QB – Flacco is the exact opposite.

How much can Denver’s O-line adjust in one year, and will they really be able to protect the man who needs to stand in the pocket (arguably more than any other quarterback) just one year removed from being one of the most questionable O-lines in the AFC?

Was Big Ben holding AB back? Was their chemistry the secret to AB’s success? Is Carr good enough to maximize AB? I don’t know. What I do know, is that Antonio Brown is the best wide receiver in the NFL.

The only man that has anything on him is Tyreek Hill, and that’s if he even plays this season. But if he does play, their teams will meet twice, which spells F-I-R-E-W-O-R-K-S. Maybe he slides a little in the draft, that’s just better news for you if he drops to where you can scoop him up.

He could be Gold. Or if Oakland struggles he could fail to deliver his full potential. Oakland is rebuilding so any Raider you draft comes with a bit of a risk. But relatively speaking, you can feel pretty good about Jacobs.

This probably has more to do with how good the new Raiders will look than Grant’s skills specifically. But he is a decent bargain pickup if you believe in Oakland.

Red Zone Rick, a long time fantasy football player, commissioner, and writer knows how to draft a team. When not on the lookout the next great sleeper pick, he can be sometimes be found foraging for the best morel mushrooms in his native Minnesota.

Check out the Red Zone Rick Player Rankings for Other Divisions: