Editor’s Note: Fantasy football player rankings help set the stage for a successful draft. It’s critical to know who, and who not, to draft. We’ve called on Red Zone Rick to rate the players for the fantasy potential for each division. In this segment, he takes on the powerful NFC West Fantasy Football Player Rankings.

The NFC West features the potent offense of the Los Angeles Rams. Stop right there. That should be enough for you to understand these rankings up and down. Why? Because the Rams’ offense features so many gold-level players that you’ll want to know about and draft.

Yes, there’s also the Seahawks, 49ers, and Cardinals. So, pull up a chair, and have a good read-through. You might also want to revisit this page as draft day approaches.

Red Zone Rick ranks the top fantasy players from each team and places them either at a gold level (the highest), a silver level, a bronze level, or a diamond in the rough (high risk, but high reward potential). Check ’em out.

Look, this year’s Rams feature more gold than Fort Knox. Take a long hard look at the players on this team, and make sure you grab the good ones if you can.

He’s phenomenal but all that work on a bad knee would be tough for even the best of us. So there is a small bit of concern. However, unless we see otherwise, expect Gurley to be the same workhorse he’s always been.

He’s young and he has already been face-to-face with Tom Brady in the SuperBowl. He lost (as most men do in that situation) but don’t let that knock his value. He’s going to continue to progress this year with one of the most dominant offenses in the NFL.

On the charts, Brandin Cooks is listed as the WR1, but in reality, it is Woods. Woods has outperformed expectations and is starting to look like the real deal out west. No moment is too big for him, and Goff has trust in him. He’ll continue to dominate in 2019.

Brandin Cooks has the blazing speed to stretch defenses and also stack up large chunks of yards and fantasy value in a single catch. They brought him out to L.A. so that he could round out the Rams offense and he has not disappointed. This season, expect him to be even better than last year now that he has a full year of experience with the Rams under his belt.

They probably won’t be as dominant as they were last year, but they will still be very, very good. This is a defense you set in your line-up Week 1 and just leave it there.

43 Questions and Answers on Fantasy Football

All that gold and no silver. The rich get richer and the poor stay poor.

There is a chance that if the wear-and-tear on Gurley’s knee is concerning enough the Rams will scale back his usage. Brown would be the logical man to pick up the extra totes if such a situation were to develop this season.

The only reason he’s down here and not in Gold is because of the season-ending knee injury he suffered in 2018. If he bounces back from it then he will once again be a dominant part of the offense.

Doug Baldwin was an absolute animal and it is sad to see him go. Tyler Lockett now steps up as the main WR in Seattle. Watching his game tape, it is clear that a lot of Doug’s moxy rubbed off on Lockett. You want him on your team this year– I guarantee it.

The Seattle running game has been a scary thing for fantasy owners since Marshawn Lynch left town. There was a brief string of games where Thomas Rawls looked like the next big thing, but since then that ended and it has been a wasteland of talented but ultimately unproductive RBs ever since.

Let’s hope Carson can break that trend this year, but nobody should be expecting more than RB2 status from him.

They drafted him in the first round last year with the assumption that Penny might just be so good on the ground that they could continue to ignore the issues in their porous O-Line. It says a lot about what they think of his ceiling. But without an offensive line, he can’t possibly reach that ceiling. It depends on how the O-line plays this year, but Penny could pan-out as a real fantasy bargain. (RB2 at best)

He’s been solid but not stellar.

He started to put it together last season. Russell Wilson likes tough-nosed, athletic WRs, and Moore was beginning to look the part.

DK Metcalf has all the measurements to be an amazing player. But is he too raw? Especially considering this year is his rookie campaign. A lot of his success will depend on how clean his routes look. 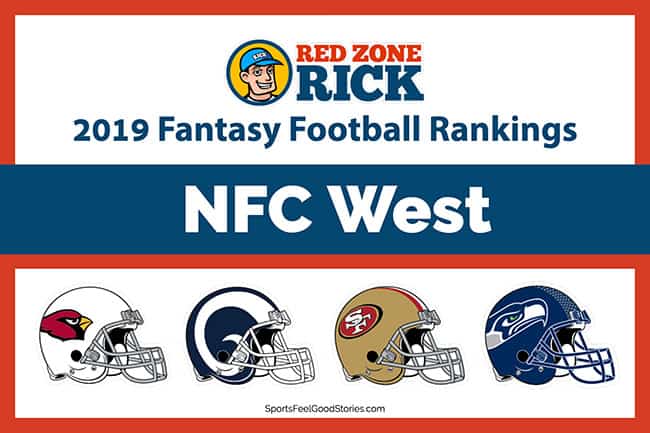 The hype surrounding Garoppolo coming into the 2018 season was unreal. Expectations were that he single-handedly was going to take the 49ers from the worst team in the west to instant contenders. And then the ACL happened. The season was lost; the hype is gone.

But Garoppolo is still Garoppolo. So what does that mean for 2019? It means that now he’s flying under the radar. He could be the QB steal of the draft if he goes late enough.

Ranking him Gold might be a little high, but it’s the only logical rank to give him. He will have a real shot at being a top-5 TE. The wide receivers in San Fran are the least impressive group in the NFC West– and Kittle is the most impressive TE. So put that together with Jimmy G and what do you get? Hopefully, your tight end position locked down Week 1.

He’s back with Kyle Shannahan and you can expect that he’s going to hit the ground running. He catches, he runs, he does routes and sweeps – he’s a great addition for Shannahan’s group.

However, he will share the load with two other equally dynamic RB’s so although it’s great news for the 49ers as a team, it isn’t exactly what fantasy owners love to see. Still, he’s a promising player that will get a lot of game time.

He usurped the throne from Alfred Morris in 2018 and just kept running. He got injured and just kept running. 2019– expect more running. In one word: explosive. Like Coleman, Brieda can catch and run (and best of all he makes things happen with the ball in his hands). There were weeks last year where he was literally the best RB in the AFC West (and that’s the division with Gurley and David Johnson).

We will have to see how the chemistry between Garoppolo and Pettis pans out this year, but he is clearly the guy that Shannahan is counting on right now to be the aerial threat.

Pettis wasn’t someone that entered 2018 with a ton of promise but over the course of the season, he began to show that he was indeed the guy that could get things done for a struggling 49ers team. I wouldn’t draft him with the loftiest of expectations, but I would certainly feel comfortable expecting contributions from him in the form of a low WR2 or Flex.

They drafted him because they need help at the WR position. I think he is an absolutely excellent bench stash. If he starts to really develop quickly, you know what to do.

It was clear when they paid him last year, Jerick was going to be the man. But before the season even began it had already ended for Mckinnon. He’ll have already had a full year to recover from an ACL injury come September, but there won’t be any way to know if he is back to game speed until we see him on the field again.

Like the other dynamic backs in San Francisco, the key to Mckinnon’s success is in his quickness. If he can regain all of that, there’s a good chance he regains the starting role.

You can’t fault Larry for sliding last year. The entire Cardinals team was in a tailspin the entire season. Enter Kyler Murray; suddenly things feel a lot different. Is this the year Arizona wins the Super Bowl? No. Do they even make the playoffs? Realistically probably not. But does Larry finish 2019 as the top-dog receiver for his new QB? You betcha.

He got hurt last season but not before he started to establish himself as a real threat in the receiving game. That was with Rosen under center. Well, spoiler alert: Murray is better than Rosen. I think it’s safe to assume Kirk comes alive in his second season with his new QB.

There’s a lot of hype surrounding Murray right now–but it should also be attributed in part to the new head coach, Kliff Kingsbury. It’s ultimately because of Kliff that Arizona made the bold move to ditch Rosen and get Murray which means Kingsbury has special plans for Murray.

Rumor has it: Arizona might regularly deploy 4 wide receiver sets. Murray is a rookie so temper expectations, but also buy the hype. It’s impossible to know right now but the ceiling looks high and the floor looks decent.

Take your pick. Whoever comes out on top could have some fantasy value. I’d stay away from this mess though.

Who would have ever thought that in 2019 Johnson would be the sleeper on this team? Yet that’s exactly where we are at. I would project him as an RB2 (with a RB1 ceiling). If they can get him heavily involved with short passes and keep him moving downfield, his value is going to continue to rise all season long.

So, there you have it. The NFC West is loaded with fantasy talent. It just happens to be concentrated with the Los Angeles Rams. “Ram Tough” is not a bad fantasy draft strategy. In one of my leagues, the Super Bowl winner had 4 players off the Rams’ offense.

Red Zone Rick, the highly-awarded fantasy football player, and writer knows a thing or two about the game. When not throwing a Hail Mary for his fantasy team, he can be found practicing his judo throws.

Check out the Red Zone Rick Player Rankings for Other Divisions: