How many fantasy football QB’s will be standing at the halfway point of the season?

Now that Week 2 is in the books we are beginning to get a real feel for what the 2019 season has in store. Some notable QBs are already out and won’t be suiting up any time soon. That is going to have a big impact on the fantasy players around them. At this pace, not many starters will see the midway point from the field.

Let’s take a look at what we know so far.

While running back rule in fantasy football, QB’s rule in the real NFL. When your starter goes down, that can have a huge impact on a squad. And, perhaps it’s even a bigger impact when the starter has been in that role for many years.

The Jets are down to their 3rd string QB, Luke Falk. Trevor Simeon was lost for the season with a lower leg injury and Sam Darnold is out for some time with mono (the kissing disease). All jokes aside, mono isn’t a laughing matter. Not only does it drain a person of virtually all of their energy for weeks or months, but it also enlarges the spleen which is dangerous in a sport as physical as football. The timetable is up in the air.

It looks like Falk will be the QB until further notice. When a 3rd string QB is at the helm we can expect the offense to flow through the running game. That means Le’Veon Bell’s floor should remain good. Falk also appeared to trust Robby Anderson more than the other receivers, but make no mistake, Anderson and Crowder both take a hit until Darnold is back. 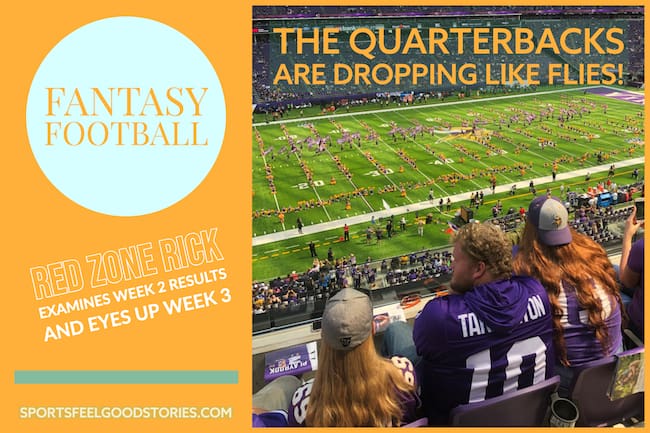 Holes in the Steel Curtain: Big Ben to be gone for some time

Sunday’s game against the Seahawks altered that fantasy landscape for all the owners of Steeler players. With the loss of Big Ben for the season now it’s time for Mason Rudolph to take the reins. This was the plan ever since the Steelers drafted him in the 3rd round last year, but it’s being put into action ultimately sooner than Tomlin was hoping.

Suddenly the Steelers find themselves without any of the 3 B’s. Bell, Brown, and Big Ben are all out of the picture. James Conner avoided a season-ending injury, and if he is able to make a quick recovery he will resume his role as the featured back. Jaylen Samuels could be on tap for more touches if Conner is less than 100%.

The most upside appears to be in James Washington, who has years of experience as Rudolph’s receiver dating back to their college days. (The Steelers drafted them together purposefully because of their good rapport, and the Steelers have proven to be pretty darn good at drafting WRs.)

It will be hot in New Orleans without a Brees

In New Orleans, it’s Teddy Time! Sean Peyton has plenty of confidence in his backup quarterback(s) and the offensive talent is going to be on full display. I think it is safe to assume that all Saints players take a hit with the loss of the Hall of Fame QB, but still starting Kamara and Thomas is a no-brainer.

Thomas’s value will probably fall the most. Teddy is a meticulous game manager, and he also prefers to spread the ball around. Jared Cook could finally see some real usage. Thomas will still get a fair amount of targets but probably won’t have as many big-chunk plays that fantasy owners love. Kamara’s floor will remain good, but his ceiling could drop a bit.

The real question is if the Saints will give us a genuine 2-QB offensive. The answer in part is yes, but how many snaps Taysom Hill receives will remain to be seen. Neither QB should be very high on your fantasy radar as long as they are both taking snaps.

Expect the Defense to step up the most in the absence of Drew Brees. The Saints D has been a formidable unit in the last couple of years and now will be the time for them to really display their grit.

Eli Manning is unceremoniously headed to the bench after another dismal performance. Everyone saw this coming, it was just a matter of how soon the overly-optimistic Pat Shurmur would finally make the switch.

A combination of exceptionally poor play from Manning in the first 2 games of the regular season and exceptionally mature play from Jones in the preseason no doubt helped to persuade Shurmur to make the switch sooner rather than later.

Barkley is a must-start, always. He is so good (and Eli played so bad) that any change will probably help him to play better. If Jones looks at all like he did in the preseason, the entire Giants offense is going to get a boost.

It might take some time, but expect Engram and Sheppard to benefit from the switch. Engram was off to a decent start so the talent isn’t a question. We just need to see how quickly Jones can form a connection with his tight end.

Sheppard also should be in a good spot to showcase some of his skills. He has always been a decent fantasy sleeper, but never a juggernaut. I don’t expect Jones the be the switch that turns Sheppard into a fantasy stud overnight, but a steady rise could be on the horizon.

Golden Tate on the rise

The biggest boon will probably be to Golden Tate owners. Tate doesn’t lose anything by the Manning benching (he’s never played a regular-season game with manning so they didn’t exactly have established chemistry). But the rookie Jones will need that trusted veteran to succeed and he has exactly that in Tate.

Trade for Tate now (especially since the suspension is nearly over) and wait a few weeks but I think the WR could be in for a much better year with Jones commanding the offense.

Jaguars trying to figure it out

Down in Jacksonville, the Jags are trying to figure out just who and what they are made of. Their defense has been pretty good, but admittedly drew a tough start with two high-caliber offenses (Kansas City and Houston) and now Jaylen Ramsey wants a trade.

The offense lost their big offseason acquisition Nick Foles Week 1, which was a real monkey wrench to the 2019 offensive retooling we were all hoping to see; now Gardner Minshew is suddenly the guy. Nobody is faulting the Jaguars for kicking Bortles to the curb, but certainly, the makeup of this offense is in flux.

DJ Chark Jr came out of nowhere and is a top fantasy WR despite the setback at QB. He has 201 yards and 2 touchdowns in 2 games off of just 11 catches. Meanwhile, DeDe Westbrooke owners have been left scratching their heads about what to do.

The talented WR has, unlike Chark, fallen victim to the quarterback changeup and posted just one catch for 3 yards last week. He’ll post better stats in the future but if you have the depth nobody will fault you for benching him until he established a good rapport with Minshew.

Notables To Consider for Week 3

Beyond the shake-ups, none of these guys should be left in free agency:

Mostert isn’t a must-start just yet. But at this point, it is almost a running gag in fantasy circles that in Shannahan’s offense, the RB that isn’t supposed to be the guy will ultimately wind up having the big day. Breida also had a big day, but Mostert was the one who really came alive.

Breida will get the start again in Week 3 (so as the joke goes, you know what that means). Brieda also has a history of injuries, so it isn’t out of the question to think that Mostert could be a must-start at some point in the future. At the least, he’s a must-own.

The 49ers found the offense that had been dormant since Jimmy G first went wild out west at the end of 2017. The running game was good, but so was the air game. Deebo Samuel started over Pettis and despite his lack of NFL experience, the 49ers utilized him like they would a featured WR (to be honest this was probably their plan all along by drafting him with the 36th pick overall). There’s a chance it was a fluke, but he needs to be owned regardless.

He was drafted in case Tyreek Hill wasn’t going to be here this season; so it isn’t surprising that he is developing a strong offensive presence in Hill’s absence. His route running is a little raw, but his speed is undeniable. His QB is also pretty good too which, as it turns out, helps. Two weeks, two different Chiefs WRs that blew up. Could Mecole complete the trifecta in week 3?

Week 2: Winner of the Patrick Mahomes’ lottery and now the proud owner of a “6 targets, 6 receptions, 172 yards, and 2 touchdowns” stat line. This week is going to be a battle of the Titans (but no Tennessee included) between Kansas City and Baltimore. There will be plenty of touchdowns for all. Baltimore will be most concerned with shutting down Travis Kelce first. That means Robinson has a ⅓ chance of being the man that single-handedly scores you enough points to win your Week 3 fantasy matchup.

Houston’s backfield is fresh but things are clear enough now to see that the Texans, as the Browns before them, don’t view Duke Johnson as an every-down back. Carlos Hyde has had that role before. Even though the Chiefs didn’t need his services the Texans have found him to be exceptionally useful in their offense.

He hasn’t exploded or anything like that, but he’s appeared to be the better half of the backfield duo so far. Neither back has been with the team very long. So, each week gives new insight into how the Texans’ RB situation is playing out. Right now it seems to indicate Hyde is the back to own.

Quarterbacks to watch in week 3

The game of the week will feature two of the hottest QBs as the Lamar Jackson and the Baltimore Ravens travel to KC to take on Patrick Mahomes’ Kansas City Chiefs. This will be a fun one to watch, but look for Mahomes to win this battle on his home field.

Rick is smarter than a talking dog on all matters related to football and fantasy football. Just don’t ask him to roll over. Tune in regularly for his weekly column and dominate your league.

Fantasy Hot Takes for the Playoffs 2019

What to look for in Week 4