Next Thursday the standard fantasy football leagues enter the playoffs. If you’re not yet eliminated, the lineups you set over the next 4 weeks are critical. Even if you’re already a lock for the playoffs, locking down a first-round bye should be your top priority.

Some of these Hot Takes may shock you, some of them may offend you, but they’re the truth and the truth will set you free! -Or at least set you up for success in the playoffs.

Crazy, I know. He was SO the guy in the first few weeks of the season but that just isn’t the case anymore. Nothing against Brady, he’s phenomenal, but the Patriots are that rare breed of good that is so good they don’t need to do things the traditional way.

Don’t get me wrong, Brady might still have some good performances. And if he’s your only option at QB then you already know you’re starting him. The problem is: the secret to fantasy football is consistency. And I expect the Patriots to consistently be dominant and competitive, but that doesn’t translate directly into fantasy points for Brady. Even though they have the best QB of all time, they aren’t going to funnel their offense through him. Instead, they are focusing on the smarter, smaller ball with a tough defense and, as usual, exceptional coaching.

The truth is, the offensive playmakers aren’t as pungent as in recent years. Sanu, Edelman, Harry, and Dorsett are PLENTY talented, but there have been injuries and the defense is so good that Brady doesn’t need to light up the endzone like fantasy owners would like him to. The schedule is also pretty tough slogging for the rest of the season. Expect Brady to be decent but not dashing with his fantasy production. 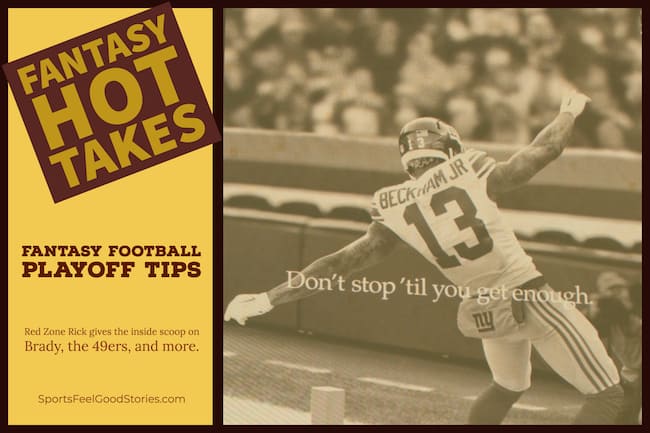 It’s come to this: Cleveland isn’t the fantasy land we were promised

Sure, you already knew to leave “visit Cleveland” off your bucket list but I’m talking fantasy football here. Yes, we already kind of knew that the Browns were going to be the same old Browns, but now it’s safe to ditch that little bit of hope you were holding onto as well. The absolute DARLING of the offseason, Cleveland has tried its darndest to keep as many of their preseason promises as unfulfilled as possible. So what do you do with all this stock that you bought too high?

It’s too late in the season to trade [for most leagues], so chances are you are stuck with what you’ve got. I’d recommend starting only Browns players with an ounce of caution.

The most promising piece of their offense is Nick Chubb, who has taken a slight hit with Hunt back. The backfield is TBD for how many touches Chubb will command, but for the most part, he seems to be the brightest star in this star-filled-yet-dim offense. Hunt is the superior receiver so expect him to get a lot of the 3rd down and passing down work. He’s maybe a flex? But a risky flex.

OBJ and Landry have flip-flopped as Landry seems like the better WR to own here. They both are strictly WR3/ Flex appeal though.

Mayfield might have some more appeal Week 14 against the Bengals if you’ve fallen on hard times.

And then there’s the Defense. The loss of Myles Garrett hurts a lot. But their secondary is also pretty banged up. In theory, they should do okay the next two weeks based strictly on the fortitude of their opponents, but nothing is certain with how Cleveland has handled their season to date.

Over the last 4 weeks, we’ve been watching a team get into its groove after a lifeless start to their season. And now that 4-game streak is a lock to extend to a 6-game streak as the Jets face the winless Bengals and the hapless Dolphins. After that, all bets are off with contests against the Ravens and Steelers. But at this point in the season, two weeks of guaranteed production is as good as gold.

Bell and Darnold are the best bets from this team. They should be started hands-down in all formats over the next two weeks. Darnold has been on a tear and Bell is a bonafide workhorse.

The offense has a lot of weapons which actually creates a bit of a conundrum when deciding who to start. Anderson has been a substantial disappointment this season, yet any given week has the potential to explode with fantasy production. Crowder has a safer floor but even that isn’t entirely safe after his two-catch stinker in Week 12. Grant is even worth a gamble if you find yourself in a real pinch at TE.

The “Rodgers Comes Alive Tour” is about to officially begin after the Packers’ Week 12 slaughter by the 49ers. The “Magic” that Aaron has displayed in previous seasons has been painfully absent through 2019. Even still, the Pack as a whole have been most impressive this season and they boast a fairly strong 8-3 record and still sit atop of the NFC North

Perhaps some of that lacking magic was due to the midseason absence of Davante Adams? I’d think, Yes. But let’s be honest, much of Green Bay’s magic comes in December and we’ve officially hit that part of the season. All the remaining games for the Packers are December games. Rodgers’ superb ability to terrorize defenses around the league is on full display when the weather gets cold and the snow starts to fly.

The 49ers were largely overlooked in the fantasy drafts with the exception of Kittle who has become a true powerhouse as the season has moved along. With his knee seemingly back to full health he is a TE1 that is entirely matchup proof. Jimmy G has such an abundance of weapons now, an ironic twist from how the 49ers entered the season, that he is also matchup proof.

The WRs and RBs have been a plethora of riches, however, they’ve been anything but consistent. Coleman was the most promising but has steadily been trending downward. Brieda provided some viability but is injured. At WR, Sanders looks like the trade of the year but now he is injured too.

Enter Deebo Samuel, who has scored double-digit fantasy points in PPR leagues in 4 of the last 5 weeks. Moral of the story: depending on how the injury shakedown plays out each week, the top-man-up looks to be startable in a pinch. But I’d stay away from any players deeper than that on the depth chart.

Yes, these two are the most prolific point-scoring duo from any team this season. Both have been healthy and productive with Godwin getting the edge in this contest. It has usually shaped up that one of them blows up, while the other stays significantly quieter.

Evans has had the lower floor in these trade-offs. Godwin has had more explosions. But both are such big point-eruptions waiting to happen each week that you simply must start them and hope they go off. They are ranked as the Number 2 and Number 3 WRs in PPR leagues behind only Michael Thomas who has a gaudy 104 receptions already.

Even Winston. Yes, the man with no fear is truly a solid fantasy option. Obviously he isn’t the most ideal [see his interceptions] but if you have any doubt at your QB position he is worth the risk. Evans and Godwin are carrying him and with both of them healthy Winston is actually *gulp* a very safe start. Although I’d feel a little nervous about starting him with the season on the line- trust the numbers.

And that’s the truth of it

You’ve got a great many decisions to make but now, but hopefully, you’ve gained a little more clarity. And when knowledge and logic still can’t give you the answer, this is the time to trust your gut. The next 4 weeks will be arduous, but if you can stand up to the challenge and emerge victoriously… if that don’t beat all! Plus, just imagine the bragging rights.

43 Things You Need to Know About Fantasy Football