People remember where they were when the Kirk Gibson Home Run took place. There have been many great moments in the history of the Major League Baseball (MLB). But the greatest moments of all have been those where the unexpected happened against the greatest of odds, taking almost everyone by surprise.

Los Angeles Dodgers’ Kirk Gibson hitting the winning home run in the 1988 World Series against Oakland Athletics’ Dennis Eckersley is considered as one of the greatest home runs of all time. When the moment called, Gibson delivered and it was entirely unexpected. He was pinch hitting in the bottom of the 9th inning, having injured both his legs. Down from 4-3 and a certain loss, the Dodgers were pulled back up with a 2-run walk-off home run that helped them win the Game 1 and go on to win the Series itself.

The home run became so big to the history of the sport that the footage of Gibson staggering around the bases on hurt legs and pumping his fist when rounding second has become an iconic footage that everyone can relate to. What made this moment so special and so big and what led to it? We find out here.

The Oakland Athletics were easily the favored team and were expected to win the Series. The Bash Brothers were young and emerging superstars. They had Canseco who became the first player ever to hit at least 40 home runs and steal at least 40 bases in the history of MLB. And Pirate Dave Parker and Dave Henderson, the veterans, contributed big with their experience. Their pitching staff was considered the best in AL.

On the other hand, the LA Dodger’s were struggling in different departments. In fact, their performance wasn’t even in the top 5 in any of the offensive stats category, except for in the batting department – where they were just 5th. Gibson had 25 home runs and was 7th in the National League, but ended up with injuries for the Game 1. The Athletics were the heavy favorites to win the Series in 5 games, but fate had something else in store – making history.

Gibson sustained injuries to both his legs during the National League Championship Series (NLCS). But he was inserted as a surprise pinch hitter when the Dodgers were trailing 4-3, already having 2 outs. He came to first base at the bottom of the 9th inning. And it was his only plate appearance in the Series.

Gibson was inserted as a pinch hitter as a late decision, as he was hardly able to walk due to the injuries. Despite pain in his knee, ankle and hamstring, he was in his uniform and sitting on the bench.

As Gibson walked back and forth between the trainer’s room and the dugout, Vin Scully’s words caught his attention, “Well, the man who’s been there for the Dodgers all season, Kirk Gibson, is not in the dugout and will not be here for them tonight.” Gibson was furious at the words and shouted back, “Bull, I’ll be there” and began limping down the runway and told the clubhouse man that he is going to pinch hit. And when Gibson steps out, the ovation from over 56,000 people is deafening. He would later go on to say that the ovation pumped him up so much that he forgot about his pain.

When he signed up as a free agent, he had declared at the time that his team was going to win, and somehow he made it possible. The win also reminded Gibson’s declaration and the subsequent World Series victory of Detroit Tigers back in 1984. He had played an instrumental role in leading the Tiger’s to their first world championship in 16 years.

When Gibson returned to his locker after the game, he found “R. HOBBS” written and taped on his nameplate. It was written by Mark Cresse (the bullpen coach) as a sign that Gibson’s feat mirrored those of the fictional slugger R. Hobbs from The Natural, played by Robert Redford.

Vin Scully’s Call Of The Game

When Gibson hit that home run to help put his team in the driver’s seat and created one of the most magical moments in the history of the sport, how could someone like Vin Scully remain silent? After all it was the sportscaster’s own team.

Vin Scully’s call of the moment went as following:

“High flyball into right field. She is gone! … In a year that has been so improbable, the impossible has happened….. They are going wild at Dodger Stadium—no one wants to leave!”

Scully’s famous call of the game has been made part of the 2005 post-season action and a TV commercial. 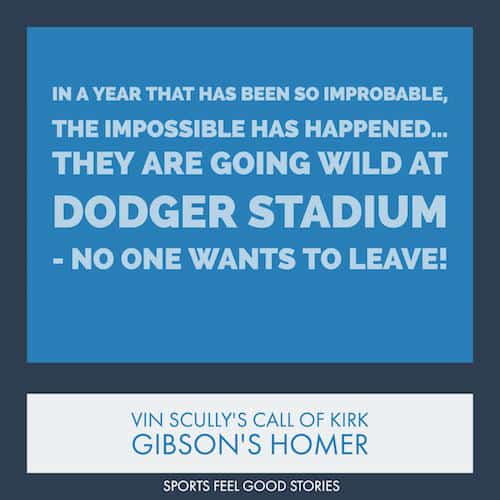 Greatest Home Run of All Time

Many have claimed the Kirk Gibson home run in the 1988 World Series as the greatest home run of all time. He delivered when the moment demanded and did so against all odds. A winning home run from a player who couldn’t even walk without the support of his bat and against the heavy favorites was the turning moment.

Gibson’s home run has been included within MLB’s contest to find the “Greatest Moment of All-Time” in the sport. It has been part of several closing montage sequences including that of “This Week in Baseball.” The home run also entered ESPN SportsCenter’s contest for the Greatest Sports Highlight of All-Time.

In 1995, the home run was voted as the “greatest moment in LA sports history.” Images of Gibson pumping his first and hobbling around the bases have become part of classic highlight reels. Many times the images are accompanied with Scully’s call. Whenever and wherever the talk of the greatest home run appears, Gibson’s walk off homer in the 1988 World Series almost always finds mention. It was the moment that mattered and Gibson delivered despite all the challenges that made his home run perhaps the greatest home run in the history of the sport. There are very few moments that come close to its importance.

After their unexpected and magical win in Game 1, the Dodgers, who were the underdogs, go on to win the World Series 4-1 against a team that was much stronger to them in almost all statistical comparisons. At one point in the Series, the Dodgers started with one of the weakest hitting World Series statistics since the Dead-ball era. However, it was perhaps the encouragement and the newfound confidence in Gibson’s memorable walk-off homer that put the team in the right place to go on and win the Series against the heavy favorites.

Kirk’s achievement has been considered as the reversal of the moment that inspired the “single most famous baseball poem ever written.” In 2000, Michael J. Farrand created and adaption of the Ernest Thayer’s “Casey at the Bat: A Ballad of the Republic Sung in the Year 1988,” and named it, “The Man Who Gave All the Dreamers in Baseball Land Bigger Dreams to Dream.” The Baseball Almanac recognized the poem and it depicted Gibson in place of Casey and actually hitting the home run when it was needed.