When the winter doldrums set in, don’t fear, as March Madness 2020 is just around the corner. The Men’s NCAA Basketball Tournament begins on Selection Sunday, which this year is March 15, 2020.

As one of the premier sporting events of the year, it’s only natural to have a few questions about the tourney. We’ve put them all together in this frequently asked questions post for your one-stop reading.

When does March Madness 2020 start?

When is March Madness?

The field of 64 teams in the NCAA Division I men’s basketball tournament begins to play on March 19, 2020. The Final Four is set for April 4 and 6 at the Georgia Institute of Technology in Atlanta.

The championship game marks the end of March Madness. It is scheduled to be played on April 6, 2020, at Mercedes-Benz Stadium in Atlanta, Georgia.

When is the March Madness 2020 bracket available?

Brackets for the 2020 March Madness will be set on Thursday, March 19, 2020, after the First Four play-in games are decided.

What teams are in March Madness?

The Sweet 16 is the regional semifinal round of the tournament. Winners of the Sweet 16 reach the Elite Eight.

Who is in the Final Four?

Where is the Final Four?

The Final Four takes place in Atlanta at Mercedes-Benz Stadium.

What teams are the March Madness 2020 sleepers?

A sleeper is any team outside of the top seeds that have the potential for a deep run in the tournament. Bleacher Report lists Illinois, Ohio State, Marquette, Michigan, and Virginia as their top five sleeper picks for the 2020 tournament.

What time is the 2020 NCAA Championship?

The final game of March Madness is on April 6, 2020. The tip-off is yet to be announced but generally takes place shortly after 8 pm.

Who are the broadcasters for the Final Four? What channels?

The games can be seen on CBS, TBS, TNT and TruTV channels.

Who will win March Madness? Favorites

Is Taylor Swift performing at the 2020 Final Four?

The Final Four in Atlanta will feature a free concert performance headlined by Taylor Swift at the Capital One JamFest on Sunday, April 5, 2020. The three-day music festival features entertainment during the NCAA tournament’s Final Four weekend.

Why is it called March Madness? It’s meaning and history

The collegiate basketball tournament got the name March Madness from the Illinois High School Association (IHSA). Each year beginning in 1908, high school teams in Illinois played in a state-wide tournament.

The tournament grew in popularity to the point it was named “March Madness.” Henry V. Porter, an IHSA executive, used the term in an essay he wrote about the tournament. Media picked up on the term and used it regularly to describe the games. In 1989 ISHA trademarked it, making it the official name for the tourney.

By 1996 the NCAA was using the name on clothing and merchandise. IHSA officials challenged the NCAA’s usage rights but eventually agreed to share the name instead of engaging in a drawn-out court battle. 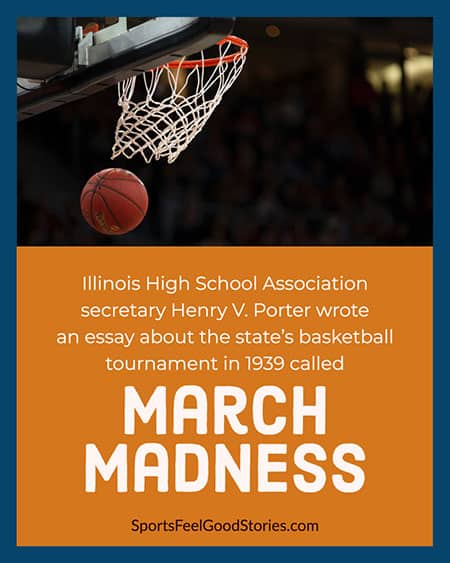 Who coined the phrase March Madness?

Who owns the term March Madness?

The NCAA currently owns the trademark for March Madness.

How does March Madness work?

68 teams take part in the NCAA Division I men’s basketball tournament each year. Four of the teams are eliminated in the First Four games before the main field of 64 teams plays in the first round.

The teams are divided into four regions of 16 teams each. Within each region, the teams are ranked or seeded 1 to 16 depending on their final record and national ranking.

When the tournament begins, the top-seeded team plays the lowest-seeded team within their region. The next highest seed plays the next lowest seed, and so on.

The system is set up for a potentially easier path to the finals for the highest-ranked teams.

How many teams play in March Madness?

The complete field of teams in the tournament is 68.

How are teams selected?

32 Division I postseason conference champs receive an automatic bid to the tournament.

The selection committee determines the remaining 36 at-large bids. On Selection Sunday, the committee picks the teams based on their own criteria.

What is the March Madness selection committee?

The selection committee consists of 10 members who select, seed and bracket the field for the NCAA Men’s Division I Basketball Tournament.

Members are nominated by their conference and serve for five years on the committee.

When was the first March Madness tournament? Who won?

The very first men’s college basketball tournament occurred in 1939. In that tourney, the Oregon Webfoots beat the Ohio State Buckeyes 46-33 at Patten Gymnasium in Evanston, Illinois.

The National Association of Basketball Coaches organized the tournament for the first two years. Beginning in 1941, the National Collegiate Athletic Association (NCAA) took control of the tourney.

What is First Four March Madness?

What is the March Madness bracket?

When someone says they are filling out a March Madness bracket, that means they have a printed or online grid showing all the teams involved in the NCAA Men’s Basketball Tournament.

Millions engage in predicting winners and losers by filling out their bracket before the tourney begins. With the mathematical odds against picking every game correctly, there has never been a perfect bracket.

What are the odds of creating a perfect March Madness bracket?

The odds of creating a perfect March Madness bracket are one in 9.2 quintillions.

How much money do you get for winning March Madness?

Billionaire investor Warren Buffet offers his employees $1 million for anyone who can fill out a perfect March Madness bracket.

Wagering through office pools or friends usually pays much less to the eventual winner.

How to watch March Madness?

The games will be broadcast on the following TV stations: TBS, TruTV, TNT or CBS. They can also be live-streamed on March Madness Live.

How many possible March Madness brackets?

The insane number of possible bracket outcomes is 9.2 quintillion!

How to fill out a March Madness bracket?

There are many approaches to take in filling out your bracket. Basketball nerds will know which teams they like from watching most of the games throughout the season. Others like a more random approach such as picking teams with their favorite color uniforms or by which team name they prefer.

Brackets must be finalized the Thursday before the first round begins.

How much is spent on March Madness betting?

Estimates by the American Gaming Association indicate that approximately 40 million people will fill out about 70 million brackets each year for March Madness. The average amount wagered per bracket is $29—that equals over $9 billion in total bets every year!

How much is lost in work hours? Productivity lost

Work hours lost to checking scores and watching games amounted to $1.3 billion in 2016.

Who has won the most NCAA basketball tournaments?

Since the tournament began in 1939, UCLA has won the most championships with eleven (10 of those wins occurred in a twelve-year span between 1964 and 1975).

What are the March Madness Final Four future locations?

Watch for the Madness to continue beyond 2020 at these future locations:

2021 – Indianapolis, IN at Lucas Oil Stadium

2026 – Indianapolis, IN at Lucas Oil Stadium

What are some March Madness Fun Facts?

So, get ready for the most exciting sports event of the year. Could this be the year of upsets? Or, will a favorite find its way to cutting down the nets? Follow along, and find out.

Greg and Mike reside in the Twin Cities and write for Sports Feel Good Stories.