Our Michigan State Spartans Football Fan Guide includes a little bit of everything for football fans. We’ll cover the season schedule, top players, legends from the past, traditions, rivalries, and more.

On the banks of the Red Cedar, the sounds of a marching band and cheers from fans fill the air. There’s a steady stream of white and green heading into Spartan stadium, humming the iconic fight song. It’s the best time of the year in East Lansing – College football season. 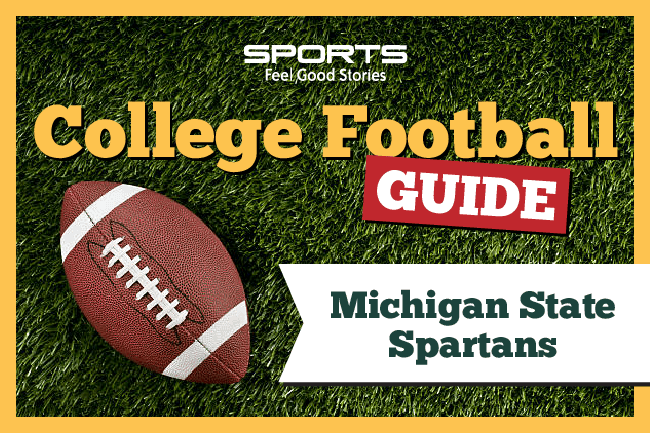 The Michigan State Fight Song has been going strong for 103 years. Francis Irving Lankey created the song in 1915. Shortly after he died in 1919, the song became a hit. The marching band began playing it in 1920 and hasn’t stopped since.

The marching band is also another tradition tied to MSU football. The band consists of 300 members and is one of the most respected in America. The marching band has played for five U.S. presidents and appeared in the 1984 World Series and 1993 Coca-Cola Bowl in Japan.

Where to Eat Around Spartan Stadium

This brewery serves much more than its famous craft beer. One of the most popular items is their chicken and waffles which served with whiskey-infused syrup.

If you eat here, try the crack fries! They were recently featured in Food Network’s magazine as one of America’s top 10 french fries!

This is East Lansing’s original craft beer bar. Crunchy’s is known for its buckets of beer and food. Patrons love the pizza nugs and stout sliders.

Five Things to Do in East Lansing on Sunday

1.) Abrams Planetarium is located on campus and popular with all ages. Admission is only $3.00 for a one-hour show.

2.) Pinball Pete’s is one of the few arcades that offers old school games. It’s a wonderful place to spend an afternoon playing Ms. Pacman and Skeeball.

3.) If you’re looking for something intellectual, visit MSU Museum. It’s a relatively small museum but filled with great finds!

4.) Escape rooms are all the rage right now. Breakout Escape Rooms in Lansing offers three different rooms. The Zombie Roadhouse has been named one of the top five in the country!

5.) The Michigan State Capitol is a popular tourist attraction. Take an afternoon to tour the beautiful building.

The Fighting Irish and Spartans have been playing against each other since 1897. While the teams do not play annually, they have played against each other 79 times. Notre Dame leads the series 49-29-1. The two teams have competed for the Megaphone Trophy since 1949. Notre Dame currently holds the trophy and will continue to do so until the teams play again in 2026.


The two teams meet annually to compete for the Old Brass Spittoon. The trophy was first presented in 1950, but the teams did not meet annually until 2011. The Hoosiers and Spartans have played each other 64 times since 1922. The Michigan State Spartans lead the series 46-16-2.

These two universities have been duking it out for bragging rights since 1898. With the schools only about an hour apart, the rivalry runs deep in southern Michigan. The winner of the game receives the Paul Bunyan Trophy, which Michigan leads 36-30-2. The two teams have met 110 times and Michigan has won 69 of those games.

About That Spartans Name

The Spartans can thank Lansing sportswriter, George S. Alderton, for their name. In 1925, a contest was held which replaced the name “Aggies” with “The Michigan Starters.” Alderton thought the name was too cumbersome for news writing and contacted the school to see if other entries were still available.

After searching through the entries, Alderton found the “Spartans” entry and history was forever changed. However, Alderton misplaced the entry and the original submitter remains a mystery.

Names from Michigan State Football Past You Should Know

The defensive end is only one of three players to have their numbers retired at Michigan State. He earned All-American honors twice. Smith was part of the team in the “Greatest Game of the Century,” a 10-10 tie between Michigan State and Notre Dame. He was very popular on campus and earned the fan chant, “Kill, Bubba, Kill.” After leaving Michigan State, Smith was drafted #1 in the 1967 NFL Draft.

Cousins was the Spartans’ starting quarterback from 2009-2011. Cousins led the team to 11-2 record in 2010. In 2011, the team went 11-3 and played in their first-ever Big Ten Championship. His teams went undefeated (4-0) against the rival Wolverines. Cousins was selected in the 7th round of the 2012 NFL Draft by the Washington Redskins.

Before famously having his house burnt down by TLC’s Lisa Lopes, Rison played football for the Michigan State Spartans. As a senior, the wide receiver had five touchdowns and 30 receptions for 709 yards. He was also a part of the team that won the Rose Bowl on January 1, 1988. Rison was drafted #22 in the NFL Draft.

The Super Bowl-winning wide receiver played college football at Michigan State. Burress set and broke a handful of records, including a Big Ten conference single-season record of 65 catches during his first season. In his last game as a Spartan, Burress ended his career with a school-record of 13 receptions for 185 yards in the 2000 Cotton Bowl. He also scored three touchdowns in that game. Burress was drafted 8th in the 2000 NFL Draft by the Pittsburgh Steelers.

Lewerke is heading into his second season as starting quarterback in 2018. Last year he threw for 20 touchdowns and had seven interceptions. He averaged 214.8 yards per game in 2017. Lewerke is expected to be one of the key players on the team this year.


The running back is heading into his final season as a Spartan before graduating in the spring. Scott was initially unsure of returning for a final year, but Coach Dantonio hinted the running back would see the ball around 250 times in 2018.


White is back as a starting wide receiver in 2018. Last year, he had four touchdowns and 490 receiving yards. He also set a Spartan single-game record with 165 receiving yards against Northwestern in 2017. White’s father, Sheldon, is a former NFL player who played as a defensive back from 1988-1993.

Mark Dantonio has been the Spartans’ head coach since 2007. His overall record with the team is 100-45. Since taking over as head coach, Dantonio has led the Spartans to three Big Ten Conference championships. In 2013, the team had its first 13-win season.

“Being a Spartan to me means operating with a high standard of excellence regardless of the challenges you face.”
– Kirk Cousins

“We came here with an idea that we were going to have to weather the storm or be the storm.”
– Mark Dantonio

“You don’t have to disrespect people. If they want to make a mockery of it, so be it. Their time will come.”
– Mark Dantonio

Q: How do you keep a Spartan out of your yard?

Where Do the Spartans Play?

The Spartans play at Spartan Stadium in East Lansing, Michigan. The field opened in 1923 and is primarily used for football, although hockey games and concerts have been held there.

While the stadium originally only held 14,000, over the years seating has been added and can now accommodate over 75,000 people. It is the Big Ten’s sixth-largest stadium.

How to Get Michigan State Tickets

Recent MSU graduates can score tickets for $245 each.

For group tickets – 10 or more people, head over to Seat Geek.