Editor’s Note: Saquon Barkley, Ezekiel Elliot, Zach Ertz and others make the NFC East a fantasy football owner’s playground. To help break down the talent, we’ve asked Rick Zone Red to do what he does best and identify the top fantasy prospects from each team.

Has he’s done for other divisions, he’ll group prospects by team into the highest level gold, then silver and bronze. And, he’ll try to identify a “diamond in the rough” for each team – a player with high risk but potential high reward. Read through Rick’s reviews and come draft day, you’ll be ready.

The Cowboys and the Eagles will battle it out for control of this division. Two young QBs – in Dak Prescott and Carson Wentz – lead these two contenders. But, fantasy owners should be able to rely on these proven talents. The division winner will likely be decided on how the rest of the team performs.

The ‘Boys add some receiving depth with the return of tight end Witten and the addition of Randall Cobb. But, really, it was the emergence of Amari Cooper that has opposing defenses worried. Combined with Elliott’s running game, the Cowboys have a two-pronged attack that can’t be ignored.

The rebirth of Amari Cooper is a beautiful thing.  I don’t know what was in the water in Oakland, but it is kind of mind-blowing to believe that his status was considered “bust” the first half of last year and then “bonafide superstar” the second half of the year after moving to Dallas.

Sure he didn’t put down a whole season as a Cowboy, but what more do you need to see?  WR1 status.

You already know Elliott is RB1 status.  He needed some help and he got it from the trade with Oakland.  Dallas went from an afterthought to a contender.  They will stay as a contender.

If you needed to know what was going to keep the Cowboys fresh so that Elliott wouldn’t get stale – it’s Cooper. The only question mark on Elliott is the possibility of off-field issues affecting play. Nevertheless, expect another big year as the Cowboys compete to get into the playoffs.

His RB/WR duo during the second half of the season legitimately looked like maybe the best in the league. Dak is a pretty safe QB to play.

The Boys’ D is a big part of what really made this unit shine. Expect more good things this season.

If defenses are preoccupied with Elliot and Cooper, there’s a great opportunity for a viable WR2 to emerge from Dallas.  I’m not sure if that’s Gallop, but it could be.

*See Above*. Aaron Rodgers needed help last year and couldn’t get it out of Cobb so it’s a little hard to imagine Dak can be the Midas touch. We’ll wait-and-see

He’s big, he’s experienced, he’s calm, cool, and collected – and he’s not cut out for the broadcast booth (at least not yet). In the red zone when defenses focus on Zeke and Cooper, where does Dak go next? Maybe his TE.

Wentz finds a way to win. The bigger question: can he stay healthy? With the return of DeSean Jackson, Eagle fans along with Wentz have to be excited.

Forget all the questions about Wentz’s health because that’s only going to make you hesitate on a good thing. Wentz is good – he’s really good. This whole team flows through him.

If he goes down, there is no Foles’ insurance plan this time. Any player is at risk of injury anytime. Wentz is so good, that you take that injury risk and you just accept that it’s a possibility but you don’t worry about it and you don’t look back. This is a year long, potentially top-tier fantasy QB.

Ertz came onto the scene a few years ago and hasn’t slowed down since. He’s an every-down TE that moves like a WR and creates mismatches wherever he lines up.

The only issue is that the cat is out of the bag, and if you want him it’s going to cost you. But Ertz is one of the few situations where splurging on a TE is entirely justifiable.

Jeffery has found his groove with the Eagles. He was good in Chicago, but Wentz is the best QB he’s had. It wouldn’t be out of the question to think that Jeffery could conceivably have a career year in Philly if everything goes right.

He showed last year that he is still as athletic and competitive as ever, and Philly is in win-now mode. I wouldn’t reach on him, but pick him up if the timing is right.

It’s been a long time, but Desean Jackson is back in Philadelphia and it sure feels right.  I think it’s safe to say that everyone wants to forget the Chip Kelly experiment whether you’re an Eagles fan or not.

And even though he’s been gone for years, it sure looks like Jackson still hasn’t even lost a step.  He’s a bit of a risky WR2 but the ceiling is sure there.  I like him a lot as a flex play.

Desean Jackson isn’t the only WR with a quick step in Philly. Agholor has always had the speed, but he finally found his hands last year. He looked so good at times that he made everyone forget that it wasn’t long ago when he was a healthy scratch on game day because he couldn’t reliably catch a pass.

It’s hard to know how things will pan out this season, but Philly looks like one of those teams where everyone’s boat will rise.

Miles Sanders looks the part. And he could be. But the Eagles have 4 other backs right now that all have more experience. Clement, Smallwood, Adams, and Howard all look to cut into Sanders’ share. Plus, he still needs to get up to NFL speed.

Make no mistake, he could climb these grades quickly through the summer and preseason, but right now this is a loaded team and running back by committee seems every bit as reasonable as anything else.

If there is one thing I can’t understand, it’s where all of this anti-Jordan Howard talk is coming from.  People across the league are down on him, Chicago got rid of him, and analysts don’t believe he is a top caliber RB.

Well, he can catch, he can break tackles, and he can bulldoze.  He has over 3000 yards in 3 seasons and he is healthy.  Put this man on your bench and wait to see what happens.  It’s worth a shot.

Will sophomore year be another huge one for Saquon Barkley? Giants’ fans are itching to find out. With ODB Jr. no longer suited up as a Giant, will even more responsibility be sent Saquon’s way? Yes. But, perhaps the biggest question is: Can Eli find the magic again?

2018 Offensive Rookie of the year. And he did it with no help. Defenses knew he was the man to stop, and he still tore them apart. Amazing. He’s probably worth the number 1 pick in the draft, honestly.

Golden could be pure gold in New York. He really could. He’s a more-mature OBJ but admittedly not as talented. Tate has been impressive for a while now, so don’t overlook what he could do out east. However the drop-off in his QB talent from Russell Wilson and Matt Stafford to the 2019 version of Eli Manning is something concerning.

He could be Gold-graded too – but feels a little closer to Sterling Silver with Eli at the helm.

Another talented WR on this team, but the questions all fall back onto the QB.  I wouldn’t use a bench spot on him at this point unless we see some production through the air from Big Blue.

Starting to sound like a broken record, but again, the QB is the issue here. Engram is a versatile, fast, strong TE with real potential to be a year-long fantasy starter but he hasn’t really put it together yet, nor has his QB demonstrated that he can still put it together.  Worth a bench stash though.

It’s hard to be bullish on the Redskins chances this year. As such, be very careful drafting Redskins players early in the draft.

At times in the past he was a superstar, but changes at the quarterback position and injuries have put one a potentially great tight end into very questionable waters. I would still call him a safe-ish draft choice but he’s far from a sure thing. The talent is there, but reliability has just consistently been inconsistent far too often for Reed.

All Day still has some gas left in the tank. At times last year he was as quick and powerful as ever. The season is long though and it started to show as little injuries built up.  Still, he has every intention of lighting things up again this season, and I’m not about to bet against him.

If we’re talking PPR, then Chris Thompson is never completely out of the fantasy discussion.  The man is too quick, too slippery, and too shifty to think that he wont be used semi-regularly by a team that needs offense.

When Case Keenum was in Minnesota, he relied heavily on Jerick Mckinnon, who plays running back in a style very similar to Thompson. You see what I’m saying?

Richardson is a finesse receiver, not a power receiver. He’s got the touch, but he just seems more like a second or third receiver option – Washington has him slated to be the top option. It could work, but only spend the pick if the price is right.

Doctson has been a solid contributor, but never a fantasy standout. New year, new QB, and anything could happen. But, nothing more than a deep bench spot if you decide you want to put some stock in Doctson.

He was a big favorite to takeover the Redskins backfield last year. Then an ACL tear cut his rookie season down before it even got underway. He’s expected to be a full participant heading into the summer workouts and if he can get back up to speed, he has a promising role to play in Washington.

NFC East — The Season Ahead

The NFC East looks to be a two horse race between the Cowboys and the Eagles. Don’t be surprised if the team that can field the healthiest group of starters for the most games emerges as the division winner. With Ezekiel Elliott and Saquon Barkley playing in this division, it won’t be surprising to see your league’s top picks come from the NFC East. 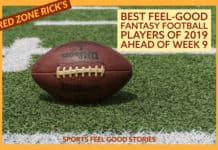