Editor’s Note: Red Zone Rick is at it again — this time, he takes a look at the fantasy football players from the potent NFC South Division. As before, by team, he’ll place the top performers in gold, silver and bronze categories. Rick also includes the “Diamond in the Rough” category for the high potential candidate that carry some risk. Enjoy.

The Falcons, Saints and Panthers are a sure bet to put up some major fantasy football points this year. Big time playmakers, including some experienced pros at QB, translate to potential fantasy stars. The key, as always, is getting the most value out of each of your picks. Sharpen your pencils, and take notes.

Could this be the year the Black Birds put it all together? They have the talent, but has the window closed already?

Probably the least flashy piece of gold you’ve ever seen. But when it comes to gold he holds his weight in value.

He’s a bruiser that can run, shake, dodge, and catch. With Tevin Coleman gone, more touches will go to Freeman this year.

Although he has some difficulty getting into the end zone, Julio Jones still makes his value known. Julio is a perennial WR1 and this year is no different.

It’s never simple when it comes to selecting a bargain-bin tight end. Hooper is one of those guys that could over-perform as easily as he could underperform.

Sanu has really become a well-developed weapon since leaving the Bengals and joining the Falcons. He’s fast, he’s strong, and he is a perfect compliment for Jones. This year Atlanta will work to get back into their old form (that brought them to the Super Bowl a few years ago). Sanu is an essential piece of the puzzle.

Dan Quinn is the mastermind behind the Legion of Boom and the Atlanta defense that nearly took home Super Bowl LI. He wants his defense to be as good as ever in 2019.

He’s more than just a sleeper. Specifically, it’s how high his ceiling is that lands him in this category. With defenses concerned already concerned with stopping Freeman, Jones and Sanu, Ridley has an excellent chance to be the odd-man-out. He’s good, but if he can make the leap this year, we are looking at a superstar. 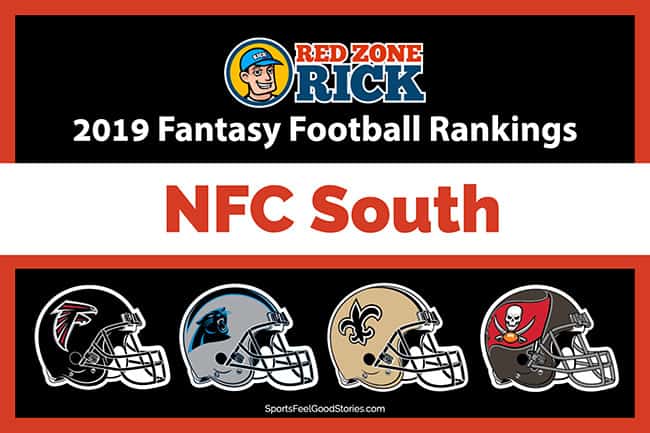 Arguably, the best 1-2 receiver-running back combo in Michael Thomas and Alvin Kamara. Be ready to pounce, because these guys won’t be around very long.

He doesn’t have a big mouth like certain other bigtime receivers but he plays just as big as anyone in the NFL. There is a very real chance that Michael Thomas will be the top leading fantasy scorer at any point this season.

Speaking of chances to be the top fantasy producer: Alvin Kamara. With Mark Ingram gone Kamara will get even more touches. It’s been amazing to watch what he’s done since entering the league. This year will be his first chance to really be a season-long bell cow. He might have the highest floor of any RB in the league.

He doesn’t stop showing up and he doesn’t balling out. The guy is gunning to win–and win it all. Don’t shy away from him now. He’s been great to his fantasy owners before but this might be the year he really rewards them.

The Defense in New Orleans has been getting better every year for the last few years. This year looks to be the best yet for this stout unit.

Make no mistake, Lutz should probably be a Gold rated kicker if not for the fact that the offense is actually really good at scoring touchdowns (and not needing their kicker as much as teams less-talented in the red zone need kickers).

The saints said goodbye to Mark Ingram and hello to Murray. The plan isn’t to translate all of Ingram’s old workload directly onto Murray but he should see a fair amount of carries. The Saints like having another RB to compliment Kamara, and Murray is an affordable option. If you have Karama, Murray is a must have.

I don’t expect a ton of production out of Cook, but he will get a decent amount of playing time.   It can be hard to find a good TE in fantasy and Cook is certainly ranked among the better ones.

Christian McCaffrey is on the verge of even a higher level of greatness. But, as in years past, the Panthers go as Cam goes.

A lot of people doubted he would actually be able to adapt and become the dominant player he was back in college when he got to the NFL… those people are all silent now. There is a real possibility that the face of the franchise begins to shift away from Cam Newton and shifts towards Christian McCaffrey this season.

He needs to put a few more things together this season before he will actually earn a Silver grade, but based on his progress last year (and the lack of other viable receiving options for the panthers) I expect him to become a stable part of this offense in 2019.

Gano can easily be one of the best kickers in the league again this season. He’s a great asset for your fantasy team.

He’s Greg Olson so he resume can speak for itself. But as of late he hasn’t exactly been producing like the old Greg once did.

His skill set is very similar to Christian McCaffrey’s. The Panthers haven’t found out how to truly unlock his potential (yet) but he’s certainly looked good in flashes.

Can Winston find the magic again? With head coach Bruce Arians at the helm, it wouldn’t be a shocker.

Evans is probably the least-exciting of the superstar wide receivers in the NFL–but finesse and excitement-value don’t have any handle on fantasy value. He’s a big-bodied receiver and when his QB hits him in stride he is a menace to bring down.

Will the loss of DeSean Jackson create more targets for Evans? Or will it allow defenses to concentrate on shutting him down? Don’t reach on him in the draft but if he slides he’s worth picking up.

Jones had a lot of hype surrounding his entry into the league, but it cooled down as the season went on. He never really became the ground presence Tampa was hoping for, but he didn’t look bad either. Growing pains? Don’t put yourself in a position where you have to depend on him, but he could have some nice upside as a flex play.

Brate looked really good last year but he will have to compete with O.J. Howard for targets. There’s nothing wrong with 2-TE sets but it is well established that Bruce Arians doesn’t excessively target tight ends.

If Ronald Jones doesn’t work out as planned, Peyton Barber has demonstrated that he is a solid RB for the Bucs. He could be a nice bench stash that turns into a flex or RB2 play at some point in the season.

With Desean Jackson in Philly, there are more targets available. There’s also a need for someone to help Mike Evans out wide. He’s an interesting pickup but not someone you want to be relying on to start off the season.

He’s had ups and downs. He could be the QB of the franchise’s future – or he could be a bust. We’ll most likely know after this year.

Working in his favor: Bruce Arians.

Arians has worked his magic with faltering QBs in the past. Winston certainly has the athleticism and most of the fundamentals, he just needs to take another step forward and polish everything off.

11 Winning Tips To Shock Your League