EDITOR’S NOTE: An Orioles fan, Dan Schepleng, went to game 2 of the AL Championship series between the Orioles and Royals at Camden Yards. Dan, a.k.a. “4tenpro” on Reddit, posted a short inspirational sports story on Reddit about an interaction he saw during Royals’ batting practice between Royals players and Oriole fans. His story, that carried the message, “it’s really hard to hate this team,” made the Facebook/social media rounds and garnered some local news coverage in KC. Dan concluded his post with the line, “If we (the Orioles) don’t pull off some miracles I’m rooting for KC in the WS.”

Well, as we now know, Dan will have that opportunity after the Royals swept the Orioles in 4 games. We asked him if he could expand on his Reddit post for Sports Feel Good Stories, and the result is the article below:  “Baseball’s Greatest Gift.” Thanks Dan.

As I sit to type this on a bizarrely humid October evening the sting of an Orioles season ending is still fresh and the glow of a great season still shines. Watching a team for more than half a year come down to a low breaking ball and a bat that hit nothing but air is a pain that those of us fortunate enough to enjoy post season baseball will understand.

I have been an Orioles fan for as long as I was aware baseball existed—and as a little boy that realization comes pretty early. I remember watching Cal Ripken play shortstop, the bend of his knees and the spring as the pitcher wound up. I remember Brady Anderson’s position in the line up and his sideburns. I remember the numbers on the warehouse and the cheer as they were updated, post game. 2,128, 2,129, 2,130.

My birthday, being in early April, was usually celebrated at opening day. I carried my glove with me to every game, just in case they needed me. One day I even got my glove signed by an O’s relief pitcher. Little things in that moment I’ve kept with me: him taking it, borrowing a marker from a fan, scribbling his name, tossing the glove back to me, my heart racing as I caught what had now transformed into something much more. I remember he signed a fans program and nodded approvingly at his picture and everyone laughed.

This must have been almost twenty years ago, but I remember it like it was this morning.

The name of the pitcher has been lost in the memory, but that’s okay. His name doesn’t matter. He didn’t go on to make major league history, he didn’t go on to sign a huge contract, but he created a memory for me, something that I’ll always have. For those few seconds I was connected to him, to the team, and to the game. That connection has still held for all these years.

This year, being that we were making a real run at the postseason and having just swept the Tigers, my friends and I had tickets to the second game of the ALCS. The seats weren’t great and we overpaid, but that didn’t matter. We were, of course, playing the Royals. A scrappy team that worried me more than the Tigers, Angles, and Giants. Big bats and big arms are easier to plan for, gap shots and well timed bunts can’t really be managed. I also think it’s safe to say that if it can’t be managed by Buck Showalter, it can’t be managed by anyone.

It was one of the colder days of the week, fall had started and we dressed warm. I had been wearing the same Adam Jones jersey that smelled like the stale beer Bud Norris had sprayed on us the night we clinched the East—I didn’t dare wash it. We went early, as we often do. Some of the best times in baseball are before the stadium fills. You can see who the players are as people, when the lights are off. How they interact with one another, how they joke around. It’s also a good time, if you’re so inclined to do so, for fans to interact with them.

We stood in the left field seats, close to the wall. A line drive home run would easily make it deep into the section and a few did. By the time we had gotten there the Royals had just taken the field for their batting practice. I was a bit disappointed that we didn’t get to see the Orioles warm up but traffic had been more than we had expected. Oh well, we were at a playoff game. An ALCS game. A few games away from the World Series. The O’s had lost the night before but we chalked that up to Kansas City being lucky and we knew we were going to have to get to them early if we were going to have a chance. 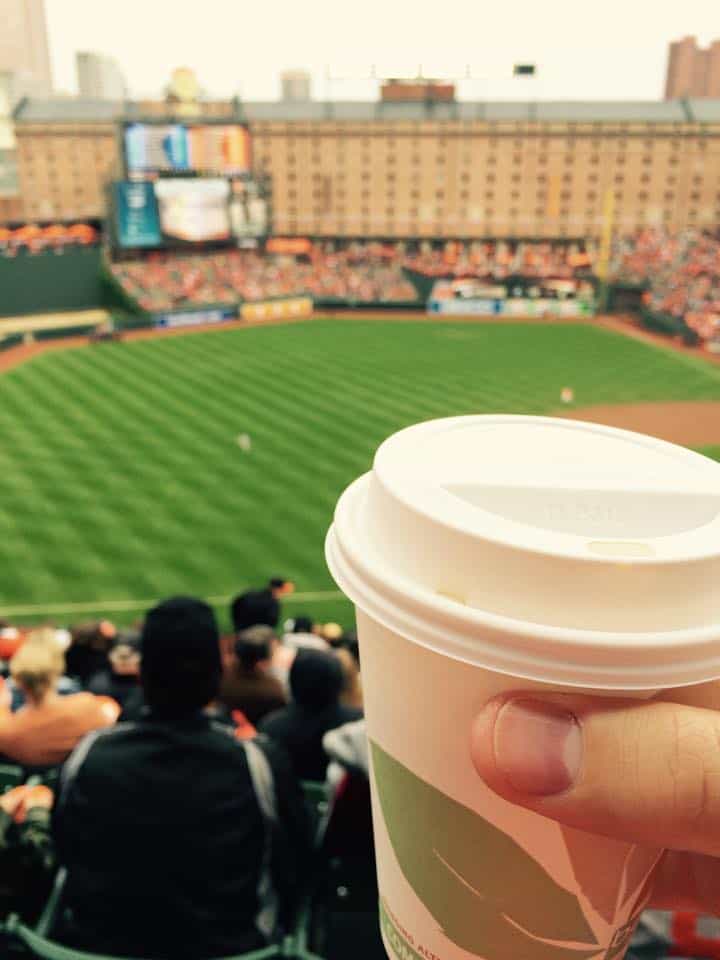 At Camden Yards the left field seats are almost eye level with the grass. Seeing the park from a players view is something special. The Royals had plenty of right handed batters that were hitting them our way and we judged them as an outfielder would. A few made it near us and one almost hit me. I ducked as the ball clanked into the seats, knocking over a Royals fan—one of the few Kansas fans I had seen during the pre-game.

On the field players stretched, talked to each other, and tried to catch fly balls behind their backs. Kids wit their own gloves, mostly Orioles fans, reached over the wall that separated us from the field. When anything was hit near us the kids called and yelled and some players tossed them into the crowd and moved on. Like a feeding frenzy everyone jumped on the balls, leaving some of the smaller fans—the kids—pushed aside. Some fans did the right thing and gave them to the younger fans. Some didn’t. I hate those guys.

I know of Scott Downs (Royals’ relief pitcher) only because I looked his name up after the fact. He came over to the wall where the kids were leaning. More and more right handed hitters plowed baseballs towards our section. He ran down a few and as he did he tossed them right into the glove of a waiting fan. But then he stood, facing him with an expression that said “well, are you going to throw it back?” Confused, the boy didn’t know what to do. Downs eventually said “throw it”. He caught the ball and gently underhanded it back to another waiting glove. This time it made more sense what he was supposed to do, and the second boy launched it back to where it had come. Again and again toss, catch, underhand, catch. Each kid different but each smile the same. One little boy in a black and orange jersey had a pretty good arm, so Scott took a few steps back after each toss until the boy couldn’t make it anymore. That was alright, Downs said with his face, that’s pretty good for your age. Maybe you have a future in baseball? It was like these kids were warming up with the team. The opposing team.

There were far more Orioles fans in the section and on the wall than Royals fans. We cheered and clapped, not for the players, but for the kids. In that moment we weren’t Orioles fans. We weren’t Royals fans. We were baseball fans. The older people in the crowd smiled because they knew. They knew that these kids would keep this for years, the memory gift that baseball sometimes gives. They smiled because they knew that these kids might not remember Scott Downs’ name, whether we won or lost, or even the team we played. But they would remember this.

I turned and mentioned to a friend that it’s really hard to hate a team that does this kind of thing. Even though the Royals would go on to sweep the Orioles—a sentence that still carries a punch—I smile thinking about this memory, my own gift.

Baseball’s a funny thing. How can something that has one hundred and forty five years of history behind it always feels here-and-now? I had a moment twenty years ago that I can still touch, and so do those kids. When they are older they too will watch the generations that come after them stand at the wall, and hopefully there’s a Scott Downs to play catch with them, no matter what team they’re rooting for.