Michael Edwards, better known as Eddie the Eagle, finished dead last in both ski jumping events at the Calgary Winter Olympics in 1988. It quickly brought him notoriety and wealth beyond his wildest dreams. But it wasn’t fame and fortune that drove Eddie, his dream was simply to represent England in the Olympics.

A dream that came true. But it didn’t come easy.

Eddie grew up in a poor working class family in Cheltenham, England. He didn’t even try skiing until he was a teen. His first skied on the synthetic ski slopes in Gloucester. By the age of 17, he was an elite downhill racer competing in many European events. He narrowly missed qualifying for Britain’s downhill racing team for the 1984 Winter Olympics.

Looking toward the ‘88 Games, he thought if could qualify as a ski jumper, there would be no one else to beat out since England did not have a ski jumping team. However, that also meant there were no coaches, equipment or funding for training.

Without financial backing, and with no ski jumps in Britain, Eddie saved his money, borrowed his mom’s car and drove around Europe to train in the hope of being the first Brit to qualify for ski jumping in the Olympics. He used second-hand jumping skis and boots so large, he had to wear six pair of socks just to make them fit!

As he trained and competed in jumping events across Europe, he financed it with wages he earned as a plasterer in Cheltenham. But it wasn’t enough. So he had to work odd jobs on the road like waiting tables, scrubbing floors, babysitting, cutting grass and cooking. Sometimes he was forced to eat out of garbage cans and sleep in the car. He once stayed overnight in a Finnish mental hospital to escape the cold. When a nasty fall in Italy resulted in broken jaw, he couldn’t afford medical treatment, so he tied up his jaw with a pillowcase and kept training.

His poor eyesight required glasses that often fogged up inside his goggles. “Sometimes I take off, and I can’t see where I’m going,” noted Eddie. The thick lenses in his glasses made his eyes look huge and earned him another nickname; Mr Magoo. He was also about 20 pounds heavier than his competitors making him fall more like a rock rather than flying further down the hill. Style counts, but key to winning is making the longest jump.

Despite the incredible odds stacked against him, Eddie was determined to get better and slowly his distances improved. In 1987, he represented Great Britain in the World Championships in Germany. He finished last of course, but his popularity was starting to grow.

When Eddie arrived in Calgary for the 1988 Calgary Olympics, a Canadian TV crew and a fan club greeted him with a banner that declared: “Welcome to Calgary, Eddie The Eagle”. Eddie, recognizable with his pink googles over his thick glasses, did not crash on any of his jumps in Calgary and even achieved a personal best on one of them.

His fame quickly turned into fortune. Johnny Carson invited him to be on his show before the Games had even finished. After the Games, he traveled all over the world, made appearances on TV, radio, at the opening of shopping malls, ski shops, and marketing his own line of T-shirts – earning him over a million dollars. As an amateur, Eddie had to have all of his earnings placed in a trust. Unfortunately the trustees lost most of the money and he sued them in 1992, recovering some of it.

Eddie stole the show in Calgary much to chagrin of the other competitors and the jumping elite. The backlash inspired The International Olympic Committee to increase the minimum requirements and Eddie never again qualified for another Winter Olympics.

But his story has endured and he has used his fame to keep earning money over the years. His popularity will likely get a big boost this year when the movie about his life is released with Hugh Jackman as his coach (although he never actually had one.) See the “Eddie the Eagle” movie trailer.

“I have never considered myself a failure at all. I managed to qualify for the Olympic Games in Calgary. I went there and I did the best I could with what I had, which wasn’t very much. I knew I was going to come in last, as I’d only been doing it for two years and everyone else had been jumping for 20 years. But for me, getting there was my gold medal. I was a true amateur and embodied what the Olympic spirit is all about. The failures are the people who never get off their buns. Anyone who has a go is a success.” – Eddie the Eagle Edwards.

Bob Andersen is a freelance writer and former ski jumper from Edina, Minnesota. 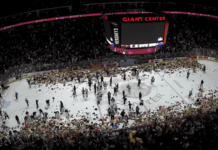