Sometimes I wonder why I write this blog, but on Saturday I was reminded why by a beautiful event. A good ref made a terrible call for a good reason.

My daughter, CC, had a basketball game today. The championship game of a CYO tournament for 4th grade girls. We got to the gym early hoping to warm up, but the 5th grade girls semi-final game was in progress. I looked up at the scoreboard to see how much time was remaining. Ugh, I thought to myself. The game was only in the 2nd quarter. A bright orange team from a parish about 10 miles away was playing the 5th grade team from my daughter’s school. The orange team was winning decisively.

My daughter spotted some friends and took off. With nothing better to do, I watched the action on the court and I am glad I did.

You could tell that the orange team was well coached because the ball was moving around so effectively. Every girl knew where to go and knew almost instinctively where help was if needed. It was so fluid. It so was beautiful.

There was one girl on the court donned in orange and thick glasses who was following the beautiful flow of the game, but she was a few steps behind everyone else. She always knew where to go, but she was just a little slow to get there. Her teammates would always patiently wait for her to get into position. They would pass the ball to her on occasion even though they probably knew that there might be better options. The girl donned in orange with think glasses was behind, but not left behind.

As the game progressed, the black team from my daughter’s school chipped away at the lead and made a game of it. Still the coach of the orange team did not make any adjustments to the line-up late in the game. He trusted his talented guards to control the final few minutes and protect the lead. He trusted the girl in orange with think glasses to get into the right position.

With 7 seconds on the clock, the orange team held a 7 point lead. The speedy guard from the white team had the ball and was cutting across the court from left to right. The girl with the think glasses was cutting  across the court right to left. She was concentrating so hard on getting into position that she did not know where the ball was. The two girls collided.

It was an obvious foul on the girl in orange. She was not trying to defend, she was just desperately trying to get to her position as coached which she eventually did and stood there as if nothing had happened.

The ref reached for his whistle. He hesitated. He looked up at the clock. 3 seconds left. He looked at the foul situation. Few fouls had been called so neither team was in the bonus. He then blew the whistle.

He turned toward the scoring table and yelled, “Foul on white #10” It was a bad call for a good reason. Although it was not a shooting foul, he put the girl in orange on the line to shoot free throws.

No one complained. Six girls jogged to the basket and lined up white, orange, white on either side of the lane. Two girls in orange and one in white took their positions at the top of the key. The girl with the thick glasses wearing bright orange stood dutifully in her defensive position on the wing. The position she was so desperately trying to get to when the play started.

The tall skinny ref with grey hair walked over to her and bent down. He said something to her. He handed her the ball and walked her to the line. The girl knew what to do and did not hesitate at all. The ball flew through the air on a beautiful arc with the school’s Prayer for Athletes blue banner hanging in the background.

You could feel all nine girls on the court, the six or so girls on the both benches, the coaches from both teams, the two supposedly impartial refs and the one hundred plus fans praying for the ball to go in.

The ball bounced off the back of the rim.

A teammate rebounded the ball and gave it to the ref. The ref bounced it to the girl on the line. Again, without even a moment of hesitation, she launched the ball up toward the hoop. Again the ball had a beautiful arc, but again the ball bounced off the back of the rim. She was a little too close or a little too strong. A loud AHH came from the fans, the players, the coaches and the refs.

After the game, I wanted to shake the hand of this great ref. I approached him hand extended and told him that he made a great call. He smiled proudly. He told me how he hesitated in making the call. He told me that he was concerned that someone would get mad. Then he told me that his daughter has Down syndrome too.

Fran Dicari is  the over-scheduled father of over-scheduled athletic kids and author of the youth sports blog StatsDad.com.  He’s a coach, a scorekeeper and an amateur sports photographer. He’s also an executive and partner at Barefoot Proximity, the digital marketing agency that created ManoftheHouse.com and Coachhub.com. 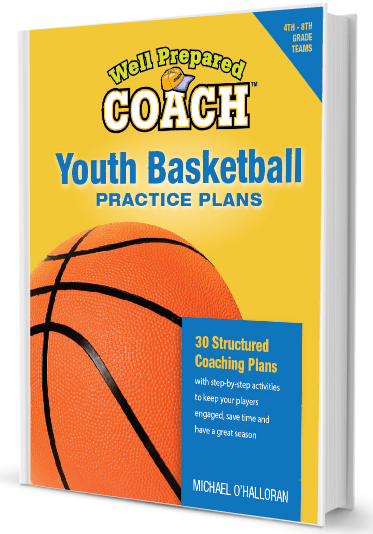 30 Youth Basketball Practice Plans — Be ready for every practice in 5 minutes! A complete season’s worth of plans – a proven formula.