Whatever genius came up with the 2019 Sunday Night Football Schedule should get promoted and a raise. After a difficult day of cheering on your home team play, followed by the second-afternoon game, who isn’t ready for a third game? More football on the weekend? Yes, count me in.

The 2019 NFL slate of games kicks off with a September 8, 2019 matchup between the Pittsburgh Steelers and the New England Patriots in Foxboro. There will be 16 Sunday Night games in all with appearances from 17 different NFL teams. There are lots of non-divisional games which could add some fireworks to the games.

All of the SNF games will be broadcast by NBC Sports and start times are at 8:20 ET. The Pre-game Show begins at 7 p.m. ET.

(All Sunday Night Games are on NBC.) 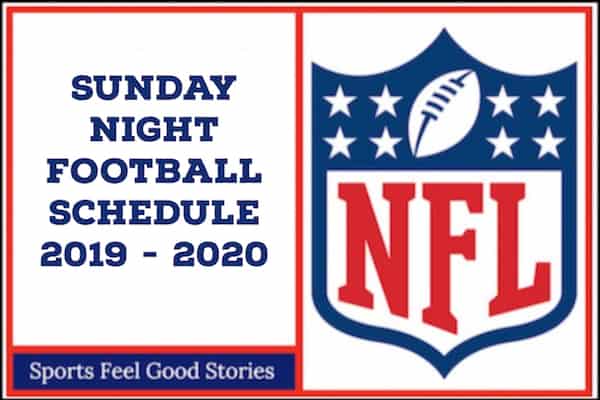 All games begin at 8:20 p.m. Eastern Time (ET). Please note that flex scheduling goes into effect beginning Week 5, which could impact some matchups.

The NFL has some flexibility as to which games to schedule looking for tilts that have more marquee value because of match-ups or playoff implications. But, only two games can be flexed between weeks 5 and 10.

First of all, tailgating with KC BBQ is as good as it gets. There’s a little history here with the two teams playing in Super Bowl I. And, oh yeah, it features the two most exciting quarterbacks in the league with Aaron Rodgers and Patrick Mahomes. Buckle up…this could be one to remember.

Well, this should be a good one, and it’s the first Sunday night game of the season. Big Ben vs. Touchdown Tommy Brady. What’s not to like?

Many folks are picking the Browns to do some big things this year. This will be a good test. How does Baker Mayfield stack up to Jared Goff? You’ll have to watch and see.

A familiar announcing team is scheduled to return with Al Michaels of “Do you believe in miracles?” fame at play-by-play. Chris Collinsworth, the former Bengals receiver, will do color commentating. And, at sideline reporter, the always-professional Michele Tafoya returns.

Steady, reliable and professional – you can count on this team to deliver week after week.

Tirico was an NFL play-by-play announcer on ESPN’s Monday Night Football for 10 years. He has also covered a variety of events for ESPN including golf, tennis, hockey, college football and the NBA. He was also the primetime host of NBC’s coverage of the 2018 Winter Olympics.

Dungy is the former NFL coach of the Tampa Bay Buccaneers and the Indianapolis Colts. He is perhaps best known for being the first black head coach to win a Super Bowl which he accomplished when the Colts beat the Bears in Super Bowl LXI. He is also noted for being the chief architect of the “Tampa 2” style of defense.

Dungy’s style of coaching places an emphasis on teaching. In comparison to many other coaches around the league, Dungy spent less time screaming and more time instructing.

As an NFL player, Dungy won a Super Bowl with the Pittsburgh Steelers in 1978 and also played with the San Francisco 49ers.

Since 2009, Dungy has been working for the Sunday Night Football pregame show called Football Night in America.

A two-time pro bowler, Harrison played with both the San Diego Chargers and the New England Patriots. With the Patriots, Harrison won two Super Bowl rings. He also held the distinction of being voted “the dirtiest player in the NFL” in a poll of his peers as conducted by Sports Illustrated in 2004.

Harrison has the most sacks of any defensive back in NFL history (since sacks have been tracked) with 30.5.

King, a former Sports Illustrated sportswriter for 29 years is also the author of five books. He was selected National Sportswriter of the Year three times. He still writes a column titled Football Morning in America for NBC Sports.

King is a member of the Board of Selectors for the Pro Football Hall of Fame. He’s also a regular guest on The Dan Patrick Show.

King grew up and attended high school in Enfield, Connecticut and went to college at Ohio University’s E.W. Scripps School of Journalism. King joined Football Night in America in 2006.

Florio, a lawyer and sportswriter, is perhaps best known for starting and managing the website, ProFootballTalk.com. Florio wrote a rumor and news report for ESPN for a short time before breaking off and starting his site. This was a side hustle to his labor law practice in West Virginia.

In addition to his law degree, Florio also owns two engineering degrees. He practiced law for 18 years before shifting to sportswriting. In addition to sports writing and TV contributions, he also hosts a radio show.

The lifelong Minnesota Vikings fan is a contributor to Football Night in America. He’s married with one child and the family lives in West Virginia.

The pre-game show for Sunday night football is branded Football Night in America. It started September 10, 2006, and airs from Studio 1 at NBC Sports Headquarters in Stamford, Connecticut.

The theme music in 2018 was “Check it Out” by Oh the Larceny with video highlights of some star NFL players. The theme song for Sunday Night Football is “Game On” recorded by Carrie Underwood.

“Game On” Video by Carrie Underwood

1.) Sunday Night Football holds the distinction of being the first, live sports competition to be Nielsen’s most-watched program on U.S. network TV during the year in the 2011-12 season. It beat out American Idol for the honor.

2.) The National Football League considers the Sunday Night Football game to be its featured game of the week. It looks to flexible scheduling to make the games competitive and noteworthy.

3.) Week 8’s game featuring the Packers and the Chiefs will go up against a World Series baseball game.

4.) Which Country singer opens the SNF broadcasts singing? Carrie Underwood has since the 2013 season. The 2019 season will be her 7th season.

5.) When the Washington Redskins played the Dallas Cowboys on December 30, 2012, it was the best-rated game in SNF history with over 30.4 million viewers.

1.) Do you think Sundays, Mondays, and Thursdays were the only days for NFL action ever? Think again. Games have been played on every day of the week – Sunday through Saturday – over the history of the NFL. Sometimes odd scheduling happens due to weather or other national events. A Wednesday game was played between the Redskins and the Giants because John McCain’s speech at the Republican convention was scheduled for Thursday night.

2.) NBC allows the starters to introduce themselves. The traditional line players deliver is their name, position and where the player attended college. But, the college fill in has now been relaxed to include birthplace, high school or even a nickname for the college.