You are here: Home / Archives for Sportsmanship

Come August every year, the best 11 – 13-year-old’s on baseball teams from around the world gather in Williamsport, Pennsylvania to determine who is the best at the Little League World Series (LLWS). With ESPN broadcasting many of the games, excitement builds with each game. This year’s series was very special indeed! Chicago’s Jackie Robinson […] 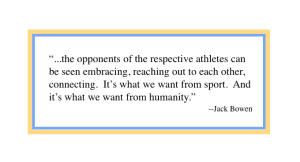 Eckerd College sophomore Kara Oberer knew she needed to do something at the plate in the 7th inning. Her team was down 1-2 against Florida Southern College. With two runners on base, she swung and connected. The result:  a home run! Only there was a significant problem. Oberer’s knee locked on the swing and she […]

The news coverage for a sports feel-good story follows a familiar path.  Typically, a local newspaper covers the story first followed by local TV.  If the story is interesting enough, it’s picked up by sports blogs big and small.  If the story still has legs, other national media outlets including well-known sports columnists, Sports Illustrated, […] 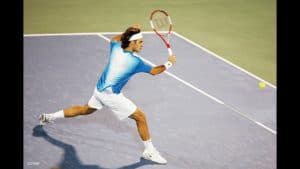 Roger Federer leads the way as tennis’ popularity continues to grow. Tennis participation throughout the U.S. continued its growth on every measurable level in 2008 with more players, nearly 26.9 million, mixing it up on the courts than at any time in the past 15 years according to The United States Tennis Association and Tennis […]