The news coverage for a sports feel good story follows a familiar path.  Typically, a local newspaper covers the story first followed by local TV.  If the story is interesting enough, its picked up by sports blogs big and small.  If the story still has legs, other national media outlets including well known sports columnists, Sports Illustrated, ESPN, sports radio stations pass the story on to their audiences.  Morning news shows and talk shows might interview the people involved in the story.  Sometimes, even books and movies  are created.

As a result, an inspirational sports story can touch many lives. The ten stories below have.

10. 12 year-old girl pitches perfect game. In a Bayonne, NJ Little League game, Mackenzie Brown became the first player to throw a perfect game in its 58 year-old history. Mackenzie, one of only 2 girls in the Bayonne league, struck out 18 batters — all boys — in route to her perfect game.  Read more/See video

9. One-handed player wins Div. I basketball scholarship. Kevin Laue’s left arm ends at his elbow as the result of his mother’s umbilical cord cutting off the circulation and stunting the arm’s growth.  While he could never quite succeed on the monkey bars or with a guitar, he plays basketball at a very high level.  He earned a Division I scholarship to Manhattan College.  Read more/See video

7. Maurice Cheeks assists 13 year-old National Anthem singer. Natalie Gilbert, a 13 year-old, began singing the National Anthem before a basketball game between the Trail Blazers and the Dallas Mavericks on April 25, 2003. When Gilbert struggled to find the correct words for the song and became flustered, Trail Blazers’ Coach Maurice Cheeks came to her rescue.  Read more/See video

5. Father’s response to daughter tossing souvenir ball back onto field. The crowd cheered Steve Monforto’s catch of a foul ball at a Philadelphia Phillies baseball game on September 16.  But the loudest cheer came when Monforto hugged his daughter after she tossed the ball back onto the field after he gave it to her to look at.  Read more/See video

3. Sportsmanship shines at college softball game. Opposing team players Mallory Holtman and Liz Wallace carried Sara Tucholsky around the bases when her injury prevented her from taking a home run trot on her own.  Read more/See video

2. Team Hoyt. A father-son team whose picture should be next to “inspirational” in the dictionary.  An amazing story.  Read more/See video 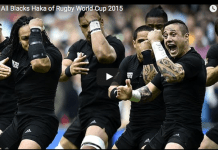 The Most Intimidating Pre-Game Ritual in Sports: the Haka Dance