Check out these Melvin Gordon Fantasy Football Names to add Flash to your league! Gordon has increased his rushing average per attempt in each of his four years in the league.

In 2017 he crossed the golden 1,000-yard rushing mark, finishing with 1,105 rushing yards. The future is bright for the man named Flash. 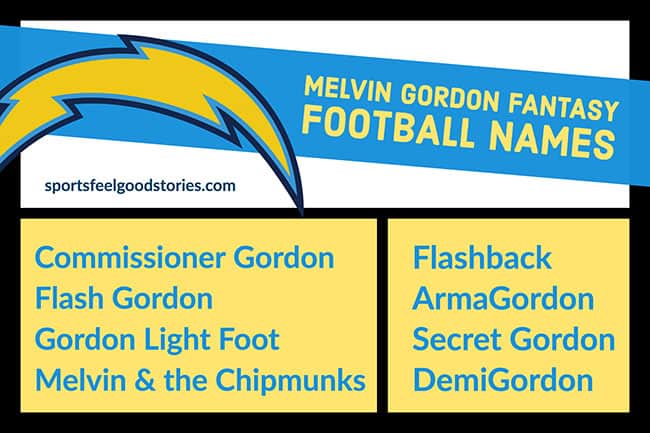 The San Diego Chargers selected Melvin Gordon with the 15th pick of the first round of the 2015 NFL Draft.

Melvin’s full name is Melvin Gordon III. Some of his nicknames are MG3, MoneyMel and Bo.

In 2018, Melvin Gordon and his QB, Philip Rivers, are both in discussion for NFL MVP.

One of Gordon’s good friends is former NFL Most Valuable Player Adrian Peterson. The two running backs get together for offseason workouts.

He gained 1,400 or more yards from scrimmage and 12 or more touchdowns in each of the past two seasons. He joined Hall of Famer running back LaDainian Tomlinson as the only players in team history to accomplish the feat.

Behind the Scenes with Melvin Gordon Video

For the Love of Gordon.

Gordon was a two-sport star (football and track) at Mary D. Bradford High School in Kenosha, Wisconsin. In his senior year, he rushed for 2,009 yards and 38 touchdowns. He was named the Wisconsin Gatorade Football Player of the Year.

The four-star recruit decided to attend the University of Wisconsin–Madison after receiving scholarship offers from Wisconsin, Louisville, Iowa, and Michigan.

At Wisconsin, he rushed for 4,915 yards and scored 45 touchdowns. Despite a slow start in his first two years, Gordon averaged over 100 rushing yards per game in his junior and senior years. He was honored as First-team All-Big Ten in his final year.