First and foremost, what we know about Fantasy Football Week One is that it’s hard to know anything for certain from Week One. Week Two is when reality starts to set in. But what we can gain from the first week of the season is good insight; we just can’t (shouldn’t) jump to any conclusions.

Surprises From Fantasy Football Week One

Lamar Jackson’s perfect 158.3 passer rating THROWING for 324 yards and 5 TDs. We wouldn’t have been that surprised by those numbers if some of them were from his rushing, but they weren’t.

Now it’s important to remember that these numbers were put up against the formless blob known as the Miami Dolphins defense, but it’s still very, very impressive. Jackson is for real. And Jackson will have to use his legs soon. When that happens the numbers could get even more stellar. Stephen A. wasn’t so impressed with Lamar Jackson.

A big piece of Jackson’s impressive pie belonged to Marquise “Hollywood” Brown and his 147 yards/ 2 TDs. Although proponents of Brown would argue they’re not surprised, what is surprising is that he posted these numbers Week 1 after missing time in both the offseason and preseason.

Chiefs Get Over the Hill

Hard to imagine a more impressive start for the Vikes against the Atlanta Falcons. With a head coach committed to developing the run, look for a big start from Dalvin Cook, who also looked great in the pre-season. 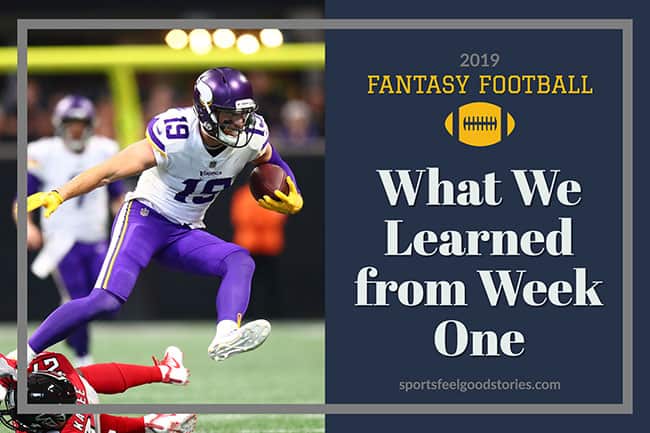 Recent Kansas City cast-off Carlos Hyde looked surprisingly good in his role with the Texans as they search for a backfield identity. He took 10 carries for 83 yards on the road against a stout New Orleans defense.

John Ross: From Bust to Boom!

John Ross exploded from “Bust” with a booming 158 yards and 2TDs off of 12 targets. It’s week 1, so who knows if that is a reliable stat line but it’s well known that the former first-rounder has game-breaking speed (the fastest 40 times) and all the indications on paper say he can do it again.

The revamped Tampa Bay Buccaneers looked anything but. Against a relatively vulnerable San Francisco defense the Bucs looked stuck. Winston made some boneheaded throws and the big air offense never took off the ground.

The Return of Defense to Green Bay

It was Green Bay’s defense that was the most impressive outfit on the field Thursday. Not Chicago’s D; Not Aaron Rodgers and the Packer offense. Defense is what won the game for the Pack.

No AB? No Problem.

Oakland: No AB? No Problem. The Raiders absolutely demolished their division rivals just 2 days after cutting their biggest offseason acquisition in recent memory. The score doesn’t represent how lopsided the contest really was; Denver was never in it. Flacco looked stiff and immobile and the Denver defense most surprisingly was pedestrian through all 4 quarters.

The Redskins sat Adrian Peterson as a healthy scratch going into Week 1. And as it turns out that was a mistake when starting RB Guice went down in the second half while the Redskins were still very much in the mix. Not surprisingly, the team will call upon the veteran AP and his services once again to bolster the ground game.

What Can Browns Do For You?

Unfortunately for Cleveland supporters, not much.

“They are who we thought they were.”
-The late, great Denny Green.

The Browns are who we thought they were.

Delanie Walker said it after the Titan’s thrashed the prematurely crowned Browns. The Browns started yet another season with a loss. The Talent is there, but so is tradition.

The fact is, the Browns are still the Browns until they start putting some real teams and the rest of the NFL on notice. Even a victory over the Titans in Week 1 wouldn’t have been all that convincing. We need to see Kitchens and Crew beat some formidable opponents first.

You have to Walker before your run

And speaking of Delanie Walker, the perennial tight end showed up once again, operating as one of the Titans’ primary weapons Sunday against the Browns. Although this is just Week 1 and we don’t want to make any assumptions, Walker reliably does this every year (except last year when he was injured). It’s safe to conclude: he is a reliable TE1 from this point forward until further notice.

The Steelers (now without the exceptionally talented Bell and Brown) were off to a slow start. The propaganda out of Steelers camp was that the team is going to be better off with the troublesome duo out of the Pittsburgh locker room and off to the AFC West. While in time that may prove true, it clearly isn’t the case just yet.

The Bell Rings For the Jets

Le’Veon Bell shook off the rust and dominated the ground game for the Jets. Even against a solid Buffalo defense Bell looked exceptional as both a rusher and a pass catcher.

Jamison Crowder was the same dynamic force Sunday as he was when he was in Washington, hauling in 14 of 17 targets for 99 yards in his new Gang Green jersey.

“Scary Terry” McLaurin as some have been calling him looked the part on Sunday. The Redskins are without Crowder and Doctson this year and while the ground game is going through Guice (or AP and Thompson as it stands currently) the air game was supposed to be lifted up by the rookie. That certainly was the case Week 1 with 5 catches for 125 yards and a TD.

Kyler Murray and the Kingsbury air raid offense was exactly as advertised. What a difference a QB (and a head coach) makes. While Arizona’s former first-round pick Josh Rosen finished his day with 1 completions for 5 yards and 1 interception, Murray completed 29 of 54 passes for 308 yards and 2 TD / 1 Int. Yes, the rookie in his pro debut threw the ball over 50 times. David Johnson looked like his old self and so did Larry Fitzgerald. The Cardinals didn’t come away with a win, but they didn’t come away with a loss either…

So Week 1 is in the books and although the narratives are compelling, history tells us to be patient before jumping to conclusions. So what can we expect going forward now that the season is officially underway?

Expect bounce-backs for the talented top picks that underperformed. I’m talking to the Davante Adams and Mike Evans owners out there. The proven talents will have their time to shine, it just wasn’t Week 1.

For some of the top prospects it wasn’t a mirage; expect plenty more where that came from. I’m talking to the Deandre Hopkins, Alvin Kamara, Christian McCaffrey, Saquon Barkley, Dalvin Cook, and Derrick Henry owners out there. You’re going to get every bit of what you drafted.

Drive the Mack Truck to the Hilton

Marlon Mack and TY Hilton look like they’re going to be just fine without Luck. The Colts came up short on Sunday but in the full scope of things, I think there was a lot more positive than negative gained from what we saw on the field. A team that loses its starting QB before the season begins has a basement level floor. But the Colts are shooting for the stars and the confidence is there for starting QB Brissett.

With the exception of Josh Jacobs, rookie running backs did not debut with flying colors. A few had their moment (Singletary and Sanders) but generally speaking, they were quiet. For what it’s worth, it’s better to have a quiet Week 1 than to make lots of noise with a costly fumble or worse, an injury. Remain patient.

The LA Rams certainly look like they’ll be keeping Todd Gurley on a pitch count for the foreseeable future.

All three of the Rams’ Fantasy viable WRs look to be decent options again this year, especially with the focus shifting away from using Gurley as the offensive engine.

The 49ers were a bit shaky but still strung together a decent showing and closed Sunday with a win. It’s hard to know how the receivers will shape up, but for the time being, Kittle (TE) and Matt Breida (RB) look to be excellent fantasy options in the coming weeks.

Chris Thompson could be a sneaky good option while Guice is on the mend. Thompson looks to be fully healthy and Keenum enjoyed a lot of success while throwing to Mckinnon with the Vikings two seasons ago. The skill set between the two backs is comparable and Thompson clearly has the trust of the coaches.

The NFC South rivalry game between the Panthers and the Bucs should be a good one. Both teams struggled Week 1 but should match up well in Week 2 in this Thursday Night NFL game. Expect a lot of fireworks.

Newton shook some of the “rust” off as he put it last week and should be in for a better stat line in Week 2. Winston is less proven than Cam but is also at full health while Cam’s shoulder appears to still be less than 100%. Carolina clearly has the superior ground game but the Bucs have a better air game. Both defenses are less than perfect but Carolina gets the edge here.

“Week One is fun, but let’s get down to business in week two,” notes the fantasy football guru, Red Zone Rick. “Time to get your game on!”

You’re on What We Learned From Week One of Fantasy Football page.