You are here: Home / Sports / Flipping Out: How to Win at Pinball

Editor’s Note: I first met Roger Sharpe at Williams Electronics in Chicago where he worked at VP of Marketing and designed pinball games. Williams Electronics, at the time, was the premier creator of pinball machines. On our visit, Roger was nice enough to demonstrate gameplay to my colleague and me. Having grown up playing pinball at the local bowling alley, I had never witnessed someone play the game at such a high level.

Roger was considered one of the top pinball players in the world. A former writer for GQ magazine, Sharpe wrote the ultimate book on the game titled appropriately, PINBALL! In 1976, he played in front of a Manhattan courtroom crowd to prove that pinball was a game of skill. His efforts helped save the game of pinball from being classified as illegal in New York City.

As pinball is enjoying a resurgence, I reconnected with Roger and asked if he could share his approach to the game. The article below is the result. Enjoy!

The dictionary definition of pinball is “a game in which small metal balls are shot across a sloping board and score points by striking various targets.” It really is that simple but for those who have enjoyed the excitement of interacting with a pinball machine, this description falls far short of the actual experience.

Pinball, after all, is a fully immersive sensory attraction with flashing lights, endless sounds and, of course, that ability to put hand and eye coordination to the ultimate test. The challenge is to control the movements of a 2.2-inch diameter silver ball. So how does this ‘dance’ between man and machine become a choreographed display of two hearts beating as one? 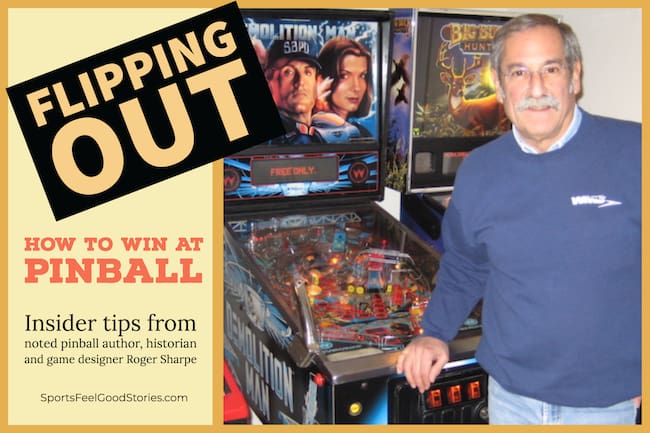 Well, whether you are a novice player or someone who is just stepping up to a pinball machine for the first time, the opening steps are all the same. Every game has its own unique characteristics—different designs and themes, a playing surface populated with various targets and objectives. However, all machines have an intrinsic storyline of what a player needs to do in order to achieve some undetermined level of success.

It may be as simple as making a shot that you have never made before or reaching a score that surpasses anything prior. That is the wonder and allure of pinball since every player can have their own personal goals.

Admittedly, for the high-end competitive players, their approach is far different in achieving the best they can. They will dissect a game in much the same fashion as a chess master looks at the board and their pieces to reach the end for checkmate.

But the basics remain the same. One, admittedly, is just to get comfortable playing pinball. Looking at each game and understanding where different scoring areas might be and how best to aim shots at the appropriate time.

So, the ball gets launched onto the playfield either by pulling back a plunger or pressing a button. The ball enters and begins to bounce around before gravity takes it on a course down to the flippers. Your reaction at that point is one which should be patient thinking of hitting a baseball with a bat.

How to Win at Pinball

Pressing the flipper(s) too soon might well result in a ball going straight up the center or to an obtuse angle that could propel the ball on an unwanted course. Waiting for the rolling ball to be hit closer to the end of the flipper will provide a more powerful force and, from the left flipper the ball will find its way toward the right and the reverse holds true for the right flipper. Left to right, right to left.

Of course, depending on the given layout of the pinball playfield, this will determine how you approach each of those times when the ball is rolling to the flippers. For the highly skilled player, one strategy is to hold up the flipper and literally catch the ball and then measure exactly what that next shot is going to be. For the average, beginner the goal is just to send the ball as far away as possible.

But at the end of the day, it is still just trying to find an approach that is comfortable and repeatable over and over again. This takes practice and patience to more fully appreciate what any game has to offer. Maybe there are certain targets to hit in some specific order. Maybe there is an area that will become activated and the chance to experience multiple balls cascading on the playfield. All machines have their own rules and typically through lights, sounds, and speech, the game will alert you to what you might need to do at any point in time.

It is that wonder and discovery of pinball which makes it the singular entertainment attraction it has been for over a century. And the fact that no two games ever play the same, means that the experience is always fresh and the challenge is never the same.

13 Pinball Machines Everyone Should Play Chart

For some this fact alone can be intimidating but for others, it is the opportunity to put various skills to the test. And no two people might like the same machine which is why pinball has endured for so long. There is a multitude of games with their own personality and one will find a way into your heart to become a favorite. It is this physically interactive exercise that can draw you into whatever that fantasy world might be under glass.

So the next time you venture in front of a pinball machine, take a moment to look at the playfield and notice if there might be more than just two flippers at the bottom of the board. Check out where different components and targets might be located and play the first couple of balls to get a ‘feel’ for the game.

As you see how the ball is moving, and from where you should be able to begin to anticipate the flight of the ball and then it is just a question of timing your flipper hits. It really is just that straightforward. Before too long you will begin to sense a feeling of greater control and a better understanding of what every game presents as its own special challenge.

But, when all is said and done, just allow yourself to have some fun. It is, after all, just pinball!

You’re on Flipping Out: How to Win at Pinball by Roger Sharpe.