You are here: Home / Sports / Kubb Game, Rules, How To Play, Team Names

Recently, a classic Scandinavian game called Kubb has gained momentum as a new outdoor game that’s fun to play. It is a bit of a variation on lawn bowling. There are pins (kubbs) that are square including a larger pin that is the king. This pin often has a crown design carved at the top. Instead of balls, players throw batons to try and knock the pins over.

It’s fun, and games can last from ten minutes to an hour. Read on to find out more about the background of the game of Kubb and how it evolved.

History of the Kubb Game

The game was developed in Scandinavia, primarily Sweden. It is rumored that the Vikings played a version of Kubb. The game is often referred to as “Viking Chess.”

It is a variation of the game Skittles. Skittles was a bowling style game that was played indoors and outdoors. The game was very popular in Europe in the 17th and 18th centuries and is still played today. Skittles are pins that are rounder in the middle and tapered at the top and the bottom. A player rolls a ball and scores points for the pins he/she knocks down.

While Skittles was growing in popularity in Europe, the game of Kubb was enjoying success in Sweden. The game uses skittle-like pins (although square) but instead of a ball, the players toss batons – round, long cylinders – at the pins. There is an additional larger pin that must be knocked over to win the game. Both games are played on a “pitch.” The pitch is the area where the pins are placed, and batons are tossed. The size of the pitch is decided prior to the beginning of the play (from the official Kubb rules). 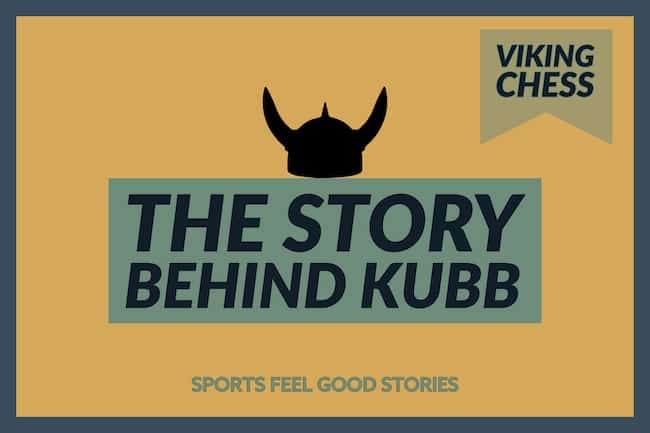 A Kubb set consists of 10 kubbs (rectangular wooden blocks that stand upright). These kubbs measure 15 cm tall and 7 cm square on the ends. A larger kubb called the king and often adorned with a crown-like top is 30 cm tall and 9 cm square on both ends. There are six batons that are round cylinders that are 30 cm long and 4.4 cm in diameter. In addition, there are six-pitch marking stakes that are used to mark the four corners of the pitch and the centerline.

Kubb is played on a rectangular pitch that is 5 Meters by 8 Meters. This pitch size is designated in the U.S. National Championship and World Championship Rules. The pitch marking stakes are used to measure out the four corners and are placed there. The two remaining stakes are placed at the centerline on either side of the pitch, essentially dividing the pitch into two equal halves.

The King kubb is placed in the center of the pitch standing upright. The kubbs are placed on the two baselines of the pitch (the side that measures 5 Meters), five kubbs are placed on each side equally spaced from each other. The baseline should be positioned through the center of the upright standing kubbs. Each team is given six batons before the start of the game. Teams can be one person, three people, or six people per side.

How to Play Kubb

The team selected to go first throws their six batons from the baseline behind their kubbs at the kubbs of the other team. The batons must be thrown underhanded and must ravel end over end toward their intended target.

If the team that started is successful in knocking down any of their opponents kubbs. Their opponent must throw the kubbs that were knocked down onto the side of the first team. These kubbs are then placed upright again in the spots where they were thrown.

If a thrown kubb knocks down a baseline kubb, the baseline kubb is placed upright again in the spot where it had fallen. A player is given a second chance to throw the kubb if it is thrown out of play. If this also travels out, the kubb is called a “punishment kubb” and can be placed anywhere in the field of play.

Play then switches to the second team and the process starts over again. If either team fails to knock down all of the field kubbs in their turn, the kubb closest to the centerline now represents the baseline, and players can move up to this point to throw their batons. Play continues until one team successfully knocks down all of the field and baseline kubbs of the opposing side.

At this point, if the team has any batons left, they may go after King kubb. If a throw successfully topples the King, that team wins. However, if at any point in the game a team knocks over the king either with a baton or a kubb before that team has eliminated all of the kubbs from the field of play, that team loses.

For tournament play, three matches are played and the team that wins two out of the three advances in the tournament.

Where Can I Buy a Kubb Set?

Kubb playing sets were traditionally handmade, but in the 1980’s the sets began to be mass-produced and popularity worldwide soared. The growth of the game of Kubb has led to the formation of leagues, tournaments, and clubs.

There are plans you can find online for building your own Kubb set, however, it’s a lot of work. You can purchase a wooden Kubb set for anywhere from $15.00 to $75.00+. Here’s one of our favorites.

Disclosure: As an Amazon.com affiliate, Sports Feel Good Stories earn compensation if you purchase through this link. 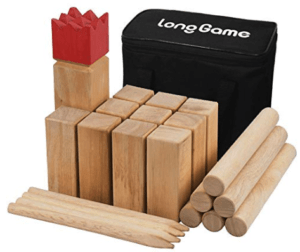 The Kubb Lawn Game makes a great Christmas gift for folks who like to play games.

The National Kubb Championship & Other Tournaments

Eau Claire, Wisconsin is home to the U.S. National Kubb Championship which was established in 2007. At that time, it was the only Kubb Tournament in the U.S. Since then, the game has grown to 40 tournaments over the course of 2016. The National Championship itself had 128 teams with 450 total players. The Kid’s Kubb division had 24 Teams with over 60 players. Kubb is often played in Physical Education classes in Wisconsin Schools. The U.S. National Kubb Championship is held as a two-day event in mid-Summer.

There is a World Championship that has been held in Gotland, Sweden since 1995. There is a clubhouse complete with locker rooms and an adjoining pitch for playing Kubb. The Kubb World Championship is held at the beginning of August every year and at least 11 countries attend. Teams consist of six players.

In addition, tournaments are held each year in Sweden, Germany, Switzerland, Belgium, The Netherlands, Czech Republic, The UK, and Italy.

Kubbnation Magazine is entirely devoted to the game of Kubb. It was founded in the Fall of 2010 with the first issue being published in January of 2011. The magazine is released just once a year and contains information related to recreational and competitive Kubb. Generally, the articles include interviews with players and Kubb champions, tips for play, reviews of different Kubb sets, information on clubs and teams, and upcoming tournaments. The magazine has even printed collectible players cards of well-known Kubb players.

Where is Kubb Played the Most in the United States?

The magazine is based in Eau Claire, Wisconsin which has become the de facto center of Kubbnation. Wisconsin and Minnesota have the greatest concentration of Kubb Teams in the country.

A number of interesting articles have been included in the pages of Kubbnation Magazine focusing on different and unique aspects of the game. Articles include:

Kubb in the UK

Battle of the Best

How Kubb Brought Me Back to Life

Growing Up with Kubb

Where Your Kubb at?

Kubb in the Netherlands

Diaries of a Kubb Widow

The Kubb Collective – Playing Cube for Charity Since 2009

Kubb players love to have fun, so it stands to reason that the clubs have come up with cute, clever, and funny team names. Here are some of our favorites:

To Kubb or Not to Kubb

May the Kubb be with You

The official saying of Kubb is, “Kubb unites people and brings peace on Earth.” This is a really nice sentiment and conveys the philosophy of the game Kubb. It is just that, a game. A game to be enjoyed by family and friends and a game to serve as a spirited competition, but never mean spirited. If we all looked at the world like Kubb players, perhaps it would be a better place.

A good outdoor game brings people together in the fresh air and spurs conversation and camaraderie. Kubb fits the bill. If you haven’t played, give it a try!

Tim Moodie is a Freelance Writer, Product Designer, Inventor, and avid outdoor game enthusiast. He has never shied away from a spirited game of Bocce Ball, Cornhole, or even Lawn Darts back in the day. He is still designing and developing today and hopes to have a new game on the market soon.

How to Play Pickleball