You are here: Home / Sports / Kickball: Rules, How to Play, Tips

In this article, we’ll be reviewing how to play kickball, kickball rules, and strategy & tactics.

The game of kickball is the baseball of recess. All the fun and thrill of a baseball game without all the equipment – no gloves, no bats, and no hats. All you need is just a rubber ball.

Often played on a baseball diamond, kickball follows the general rules of baseball, but it is easier to set up kickball games than baseball and also a lot more inclusive. Everyone knows how to kick a rubber ball- not everyone is as adept at swinging a bat. And let’s face it, it is way easier to tell if a kickball ran over the plate or was a strike than it is to know if a baseball was a strike. 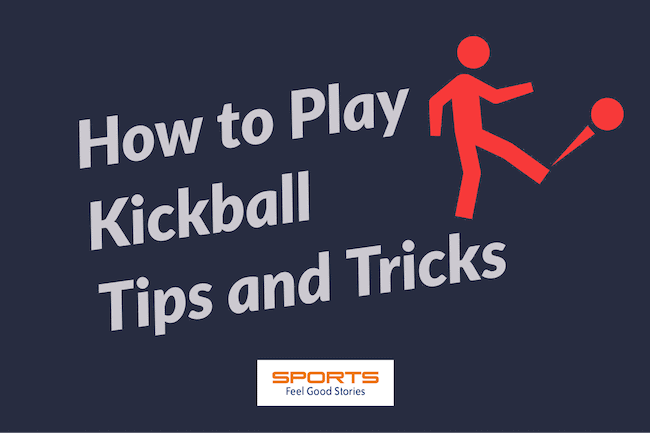 First and foremost, you need a kickball – this is a large rubber ball (the traditional red ball from gym class). You also need a playing field – home plate, first base, second base, third base, and a pitcher’s spot. The game is played with two teams, and the expectation is that each team has at least eight players, although the number often varies depending on how many people are playing.

The team that takes the field must have a pitcher and a catcher at all times. A player at first, second, and third base, as well as a left, right, and center outfielder, will round out a standard eight-person squad. The inning begins with the pitcher rolling the ball towards the home base from the pitching strip (the equivalent of the mound’s rubber in baseball).

The team kicking sends one player to kick at a time. The kicking order can be determined by the team captain or manager. This player kicks until they get three strikes (which is very rare in kickball) or until they kick the ball onto the field of play. A ball kicked outside of the field of play is a foul ball. A fair ball results in the kicker becoming the runner and sprinting to first base. If the ball is caught or makes it to the base before the runner can touch base, the runner is out. If a runner is tagged with the ball, the runner is out. Throwing the ball and hitting the runner is one of the most common ways to make an out in kickball. The other is to catch the ball in the air before it lands after the batter kicks.

When a kicking team gets three outs, they must take the field. Now, the fielding team takes its turn to kick. After three outs, the teams reverse positions again as the team kicking goes and takes the field again. Once both teams have reached three outs, the inning is complete, and a new inning starts. A game of kickball typically features at least six innings, but many people prefer nine innings. A team captain from both sides meets to discuss and settle any disputes that may arise.

How To Play Kickball

The goal of each team is to score runs. Only the kicking team can score runs. A player must safely and legally circle and touch all three bases and return to home to score a run. If a player is touched by the ball while running, they are out. A home run is when a kicker makes it back to home plate in one kick. This happens when a booming kick sends the ball over the fence or when a kick is good enough, and the runner is fast enough that they can circle the bases before the ball can be recovered and used to get them out.

The pitcher must pitch to the catcher, and the kicker tries to connect on the pitch in the process. It is more challenging to get a strike in kickball than in baseball, so often the pitcher is just trying to send tough-to-kick pitches that will result in a poor kick and ideally a corresponding out. Most of the time, the rules will prohibit the pitcher from sending bouncing, erratic balls.

If a ball goes over the plate, but the kicker does not attempt to kick it, that’s a strike. If the kicker does try to kick but misses the ball, it is also a strike. A ball kicked foul will result in strikes but can never result in an out unless it is caught.

The pitcher does have some leeway in their pitching style: fastball, slowball, outside pitch, and inside pitch. The more challenging the pitch, the less likely the kicker will be able to tee-off. However, if a pitch is bouncy, errant, or doesn’t reach the plate, it is called a ball – four balls result in a walk. A walk is when the kicker is sent to the first base, and a new kicker comes up.

When kicking, try to use the inside-top of your foot to make contact with the ball. This is similar to how a soccer player kicks. This style will allow for a more significant transfer of energy and the ability to direct the ball to travel in the desired direction.

The desired direction depends to some degree on the field. First and foremost, a home run is always the best option – but never an easy task. Trying to hit the home run is usually a solid play, but not always the smartest.

Getting to first base is the most uncomplicated objective. The best way to do this is to kick the ball in any direction other than at the first baseman. This will give the runner the most time to make it to the base. Be careful not to kick a ball that can be easily caught – sometimes a low bouncing kick is much more effective.

There will be times when getting to first base isn’t the only objective. This is when there are other runners already on the bases. For instance, if a runner is on first, kicking the ball at the second baseman will almost surely result in an out for your team. This means kicking the ball left, toward third base and beyond, is ideal.

If a teammate is on third base, it is more beneficial for your team as a whole to kick the ball in a direction that may jeopardize your chances of making it to first base if it increases the likelihood that your teammate could make it home.

Note: If you have any tips on how to play kickball, please let us know via the contact page. Thanks.

Kickball Strategies When Pitching — How to Play Kickball

How to Play Kickball When Catching

How to Play Kickball When Fielding

So, that’s how you play kickball!

Kickball was invented by Nicholas C Suess, who was a park and playground supervisor in Ohio. The game was first described in a 1917 publication called The Playground Book. Word is that Mr. Suess didn’t want to have to pay the money to purchase bats for baseball. This thrifty move brought the game of kickball to the United States.

In case the similarities between kickball and baseball weren’t enough to convince you that these two sports are related, the original name for kickball was actually “kick baseball.” It also went by the name kick cabbage, but that didn’t stick.

Canada also had an explanatory name for the game: “soccer baseball.”

Well, we hope you enjoyed our deep dive into the game of kickball. It’s a fun game that requires very little equipment – really just the kickball!

You’re on the How to Play Kickball — Kickball: Rules, How to Play, Tips page.

How to Play Hopscotch