Who doesn’t remember playing the classic game of dodgeball? It was the game that ruled recess! If you’re like most people, you were probably introduced to the game in gym class, or if not gym, summer camp. Named with the subject and the action in mind, dodgeball explains the premise of the game in just its title — dodge the ball.

As long as you dodge the ball, you can’t lose. Beyond that, there are more rules and strategies, but the raw strength resides in the ability to escape. Agility, quickness, and nimble footing are your best friends in this high-octane game. So, let’s take a deeper dive into how to play dodgeball.

Dodgeball consists of two teams, and one team occupies each side. There isn’t an official set number of players per team, so it is usually half of the group on one side, half on the other. The National Amateur Dodgeball Association allows for even teams of 6 to10 players.

The court size can vary, but usually, the lines in a gymnasium will dictate the dodgeball court’s dimensions. A reasonably common playing area can vary between the size of a volleyball court to a full basketball court, with a centerline or the center court line itself dividing the area of play in half. 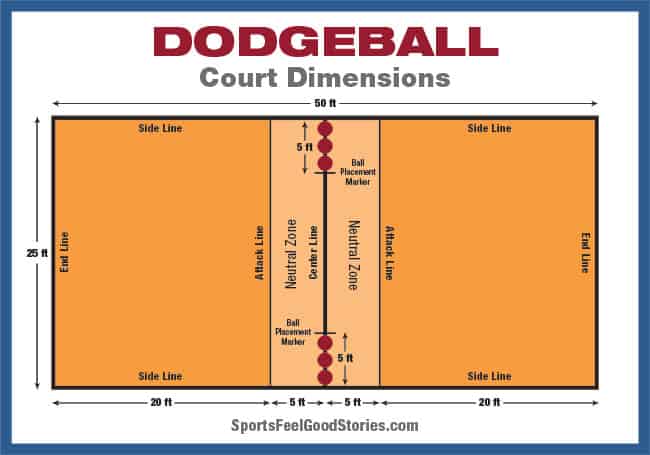 Balls are lined up at center court to begin the game. Usually, there are anywhere from 4 -10 balls, but to go by the book is to play with six balls. Everyone lines up behind the back-line of their respective sides and waits for the whistle. When the whistle blows, daring members of each team spring to the centerline to retrieve the balls for their team in the opening rush. Accidentally crossing the line is against the rules and results in an “out” — where the player must leave the court.

How to Play Dodgeball: Game Objective

The point of the game is to get the entire opposing team “out”. The most common way to get someone out is to hit them with a dodgeball. The dodgeball is thrown from in-bounds, on your side. Some games feature an “attack line.” This line is placed before the center line and prohibits someone with a ball from throwing within this line.

When a player is hit with a ball, they are out. If the ball bounces off the ground, it is a dead ball and incapable of getting anyone out. A ball is “live” until it hits the ground or is caught, even if it hits someone and ricochets.

If a targeted person catches a ball, it results in the thrower being out. If a member of your team is hit by a ball and you catch it, that player is safe. And, the player that threw the ball is out. Congratulations, you just saved the day for your teammate.

Dodgeball is traditionally a gym or camp game (and not a recess game) because of the need for referees. With all of the chaos and balls flying back and forth, a reliable 3rd party is essential to enforce the rules at times.

Once a team is eliminated, the game is over. All in all, a pretty straight forward and easy to understand set of Dodgeball Rules. Good luck with your games.

Picking teams can be as simple as lining-up and numbering off One’s and Two’s- or can be as strategic as team captains drafting players to craft a team that has good dodgers, catchers, and throwers. 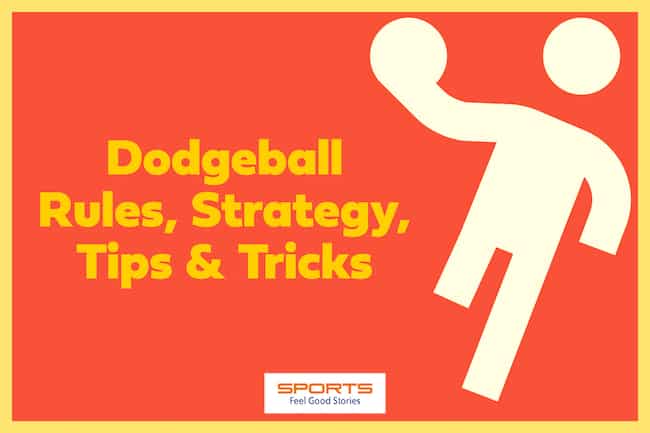 For every bit of dodgeball that is fast-paced, there is an equal part that is more strategic. From the very beginning to the very last player standing, everything in dodgeball is a risk/reward association.

At the first whistle, players from both teams race to get the balls at center court. The official rules allow for three balls to be allotted for each team- however, some rules simply award balls on a first-come-first-serve status. This immediately poses a dilemma. If you don’t “win” a ball but run for one, or if the opposing team gets to their balls first, chances are you could get hit immediately. If nobody from your unit runs, then your team will be forced to start the game without any balls- not having a ball allows their players to throw their first volley from the centerline (or attack line) unopposed, which can be a devastating way to start the game.

The best way to get balls for your team is to select a few people to run (usually the fastest people). They must then virtually play chicken with the opposing team’s runners. Sometimes players will only start to run to see if they have a good chance of getting a ball before deciding if they are going to sprint to the center. So just sending some players is a good move because the opposition might be hoping your team doesn’t.

When a player reaches a ball, they can either pick it up and throw it to exploit an advantage. Or, they can roll the ball back to waiting team members.

If your team is ever fortunate enough to collect all the balls at once, march to the center line and coordinate a volley, then retreat. It is also good to save at least one ball so that the other team can’t turn around and do the same thing to you as quickly.

When unleashing the volley, there are three main strategies. One is the “buckshot”, where your team tries to take out as many players from the other team as possible.

The second most common strategy is to fire one volley of half the balls, then immediately a second volley. The goal is to distract the opposition with the first set of balls, and then hit them mid-dodge with the second set.

The third strategy is to target a single player (their best player) and use the coordinated attack to take him or her out. Sometimes to defend against this tactic, a team will “hide” their best player behind a shield of other players in a selfless act to help preserve the team’s most vital dodgeball asset. Another strategy is to put all of the best catchers in front of the rest of the squad, and hope that they can catch as much of the volley as possible.

Most of the time, though, the game will be much more chaotic with balls slung from both sides. In gameplay, it’s a good idea to have players spaced out. Players without a ball generally should be retreated to the back of the court. When a player gets a ball, they want to advance before throwing it- a ball thrown from the end will have to travel through the air longer, making it easier for an enemy player to dodge or even worse, to catch.

Ball in Hand Tips and Tricks

When you are fortunate enough to have a ball in your hand, advance forward quickly, also, make a mental note of any dangerous players on the other side that also have a ball in hand. Sling your ball at a close target or a player distracted by other actions. Aim for the legs/ thighs ideally, because those throws are challenging to catch.

After your ball is released, immediately be ready to retreat, or at the least be on your toes. A favorite time for someone else to throw their ball is the “counter-attack” – right after the time you have thrown your ball and could be slightly off-balance because of the follow-through. This can leave you vulnerable for a split second.

Here’s another trick that seasoned dodgeball players use: Use the ball in your hands as a blocking ball if an opponent’s attempt is on target. Trying to set down the ball wastes time. This one maneuver can be a lifesaver.

If you have any tips on how to play dodgeball, please let us know via the contact page.

History of the Game

Over 200 years ago, a similar game was played in part of Africa. Although, instead of throwing rubber balls, stones were used. As a result, players died playing the game. A missionary by the name of Dr. James Carlisle brought the game concept back to his native England. He liked how the game taught players teamwork and agility. He removed the brutality of the game by changing the throwing items from stones to rubber balls. Carlisle’s game was still played outdoors as in Africa.

Phillip Ferguson, a Yale faculty member, brought the game from England to the U.S. He moved the game indoors and remade the rules to confine players to certain areas on the court. He made the official rules of dodgeball in 1905 and introduced the game as a collegiate sport. This encouraged participation to grow as many primary schools picked up the game for gym class.

The movie (2004) starring Ben Stiller and Vince Vaughn is a comedy classic centered around dodgeball. Dodgeball: A True Underdog Story features players from two gyms squaring off in a high stakes game of dodgeball that is modeled like a classic underdog story, or as the tagline goes: “A TRUE underdog story”. Rip Torn plays the old, unorthodox coach whose training methods are as effective as they are unusual. Captured best in one memorable line: “If you can dodge a wrench, you can dodge a ball.”

The Five D’s of Dodgeball

Also, from the movie Dodgeball: A True Underdog Story, where the coach of the Average Joes – Patches O’Houlihan – breaks down the fundamentals with the “5 D’s of Dodgeball.”

From the movie Dodgeball: A True Underdog Story.

Best of Cotton and Pepper Video

In recent years, the National Football Leagues’ attempt to revitalize the Pro Bowl and the week leading up to it has led to a series of challenges and mini-games that pit the AFC vs. the NFC in competitions that aren’t always football-related (like dodgeball). Dodgeball has proven to be one of the more popular mini-games they showcase.

If NFL dodgeball can teach us anything about dodgeball, it’s that even grown men still love to play the game, a referee is essential to make sense of all the finger-pointing, and you want Jarvis Landry on your team.

Jack writes about basketball, football, and a variety of other sports and activities.

You’re on the How to Play Dodgeball: Dodgeball Rules, Strategy, Quotes page.

How to Play Hopscotch