You are here: Home / Sports / How to Play Hopscotch, Rules, Tips, Fun Facts

Understanding how to play hopscotch, hopscotch rules, and some simple strategies are almost rights of childhood.

Hopscotch is like a trip down memory lane for many adults. It’s that worldwide game you learned in the neighborhood that everyone seems to know no matter where they grew up.

Do you remember marking the court with chalk, tossing a rock, and jumping through hopscotch boxes? Of course, not everyone played the same game the same way, but game variations were more alike than different. Whether it was by yourself or with friends, the universal game was a straightforward and fun childhood activity.

How To Play Hopscotch

The court can be scratched out in the dirt with a stick, or colorfully drawn out with chalk on the sidewalk. Part of the fun is just designing the court itself. Traditionally the court consists of a linear sequence of square boxes in sets of either 1 or 2. Each box is designed for a single foot, and the only way to get from the start to the end is to hop (no skipping, no stopping, no double-jumping).

A court features at least eight boxes, each one numbered 1 – 8, while many courts will have ten or even more boxes. Usually, there are just two sets of double boxes. At the end of the court is a safe zone, marked with a larger square or semi-circle. Whoever turns it hops to the secure area, turns around, and hops back to the start. Each square is about an 18″ square (one and a half feet). 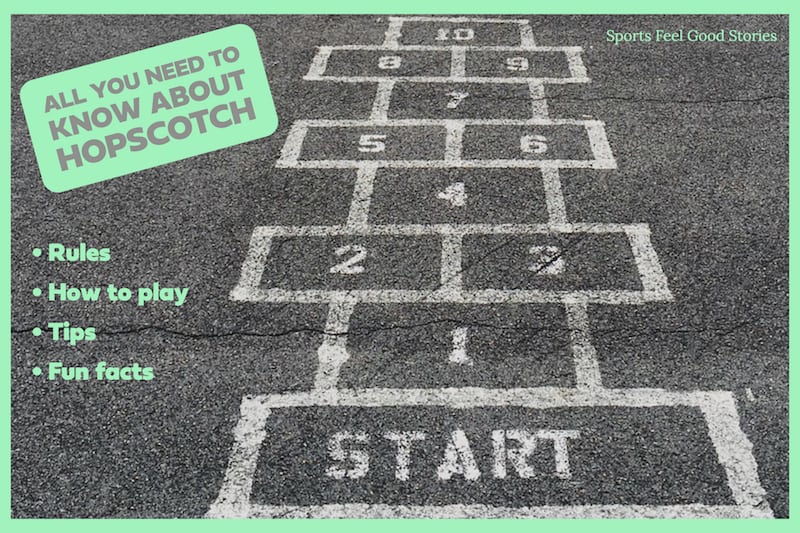 Here’s how the game is played. Before a player takes their turn, they toss a small stone, small bean bag, or bottle cap onto the court and claim a square. The square is claimed by the stone landing inside of the four lines but not touching the edges. The player then proceeds to hop down the court, skipping over the ‘marked square’ with their stone in it and tries to avoid stepping on a line. If a player steps on a line, he or she loses the turn and the next player proceeds. Upon the return trip, the player stops in the square just before the marked square and bends over to pick up the rock, then finishes hopping.

The stone or bottle cap, known as a marker or a shooter, is tossed first in the first box. When a player completes the trip up and down the court, that player is allowed to toss their shooter again. This time, the target is the second box. For side by side squares, the player lands both feet – one in each square. For single squares, the player lands just one foot in the square and elevates the other leg from the ground  — think how a flamingo stands.

Play continues until an error occurs (foot touches a line, shooter misses a square, etc.), and then it is the next player’s turn. A player wins by completing a lap up and down the court after marking each numbered square. The first player to complete the course wins.

You might enjoy Get To Know The Four Square Game

While those may be the traditional rules, hopscotch has always been a childhood favorite because it is ripe with variations and creative rule changes. The fun begins in drawing the court itself and deciding what patterns and combinations of double boxes and single boxes. If the chalk is used, it isn’t uncommon to see colorful variations across the boxes that may or may not have anything to do with the rules.

Even pure aesthetics can develop a whole set of rules: a yellow box can have a separate requirement than a blue box. Sometimes boxes are different sizes, requiring an extra-large leap if the box is big, or an extra precise landing if the box is small. And sometimes they aren’t boxes at all- any shape will do.

In France, the game is called Escargot (which means snail), and the game is played with a spiral court — the shape of a snail. The players toss a marker, then hops from the outside of the spiral to the last square before turning around and jumping back to the start.

One variation that is so common some people consider it a standard modification to the court is to draw a large box that could fit four normal-sized boxes in it. The large box has an X drawn through the middle, which divides it into four sections. These diagonal lines follow the same rules as the rest of the game but pose a unique challenge when tossing and hopping.

Instead of tossing your marker, e.g. a small rock, a player must kick it to land in the designated square. For most players, this will make it a little more difficult.

In Australia, hopscotch is played in three stages. The first stage is the traditional way of playing, but after completing the first stage, the player then jumps through the course, landing both feet in each square. The final step is much like the second stage, except the player must cross their legs while jumping- making it obviously the most challenging phase. One mistake and the player is forced to start over at step 1.

Check out Kickball Rules and Tips.

If rain, snow, or cold weather are keeping you inside, take the game indoors. Use masking tape instead of chalk and a small beanie baby-like toy for the marker. 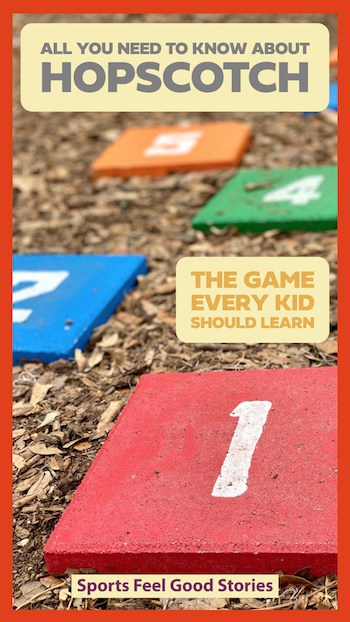 Sometimes the game has been less about the rules and more about the fun and creativity. I think everyone has at least one memory of a hopscotch court that seemingly stretched-on forever (I still remember the time the neighbor kids created a 100-square court). Or a choose-your-own-adventure court that branched off into different directions. Or boxes that were labeled by the ABCs instead of numbers.

When it really comes down to it, hopscotch can be anything resembling a game where an object is thrown into an area with figures on the ground, where the player then hops through the figures and back again to retrieve the object.

Even when playing by yourself, the game can take on a variety of fun twists. One way is to continually drop and pick up the marker into the square in front of you in order to complete the court. One mistake sends you hopping back to the start.

Not many children are overly concerned with their physical fitness; they’d prefer to just play and have fun. But to the adult mind, there is undoubtedly a right amount of balance and core strength that goes into just a simple trip up and down the boxes. Not to mention bending over and picking up a bottle cap while balancing on one foot. I’m not saying it’s a replacement for your yoga or pilates, but it’s nothing to shrug off either.

So next time you are walking down the sidewalk and see a hopscotch court- you know what to do.

Why is it called Hopscotch?

What is Hopscotch called in other Countries?

Kids learn gameplay, how to follow rules, and how to take turns when playing hopscotch. Physical benefits include improved coordination, foot-to-eye skills, hand-eye coordination, body control, and balance. Hopping on one foot also develops some muscle strength. Plus, it’s a great game for kids to develop social skills as they’re in close contact with some downtime between turns.

A sense of sportsmanship may also be acquired by playing with friends. Like hide-and-seek and kickball, hopscotch is just one of those games that everyone seems to have played at one point in their lives. So, get your kids started and let them enjoy the fun!

You’re on the How to Play Hopscotch, Rules, Tips, Fun Facts page.