You are here: Home / The Story Behind Trivial Pursuit

The success of Trivial Pursuit is undeniable. With over 100 million games sold in 26 countries and 17 languages, this game is the eighth best selling board game of all time. The game was first sold in Canada in 1981 and has been a consistent top-ten seller ever since.

Essentially, the game is made up of 6,000 questions and answers on 1,000 cards. Those with memories that remember “trivial” facts tend to perform well at this game.

Trivial Pursuit wasn’t just a top-selling game, it was a phenomenon that continues today. The game built an empire and made a lot of money for the original inventors and the companies that manufactured the game. But it wasn’t a smooth ride, the game took a very bumpy path to success. In the end, this trivia completely changed the board game market. Read on and you’ll find out how.

The Birth of Trivial Pursuit

Two friends, Scott Abbott, a sportswriter for the Canadian Press, and Chris Haney, a photo editor for the Montreal Gazette, were playing a game of Scrabble. After a few beers, the friends began talking about how much money the company that manufactured Scrabble must be making. They decided that Scrabble had to be making millions.

Their conclusion: “Let’s create a game ourselves and make a bunch of money.” During their Scrabble contest, the two had been challenging each other with trivia questions to see who had more knowledge. That’s is what they thought a trivia game should be. 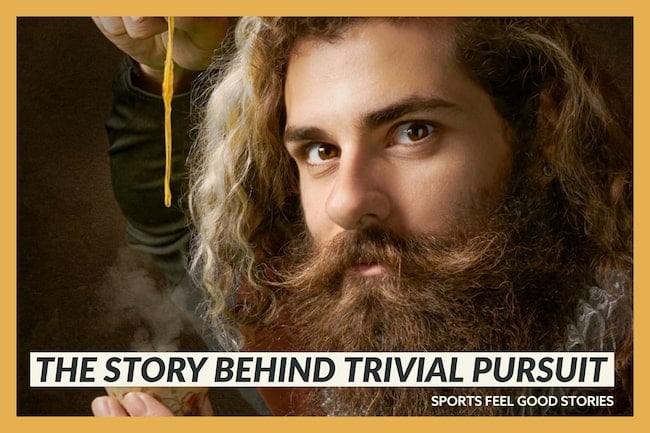 Soon they were cutting out squares of colored paper. Gluing them to a piece of old cardboard they found lying around the house to create a game board. Rummaging through Haney’s collection of games to find playing pieces. They started frantically writing trivia questions in six categories; Geography, Entertainment, History, Arts & Literature, Science & Nature, and Sports & Leisure. Finally, they had everything they needed to play a game and Trivial Pursuit was born.

Abbott and Haney started pooling their financial resources and realized that they needed more money. They brought in Haney’s brother John an ex-hockey player and an attorney named Ed Warner as investors and to help finish the development of the game. Even with two new partners on board, they still didn’t have enough money to manufacture the game. They started talking to everyone they knew and pitching the game. They brought in 32 investors and raised $40,000.

We’ve Got a Problem

This money allowed them to place an order for 1,000 games. The problem was this meant they had no economy of scale. So, each game costs $75.00 (Canadian) to manufacture. Retailers said they wouldn’t pay more than $20.00 (Canadian) wholesale for the game. Even at that price, the game would sell at retail for $40.00 (Canadian). An unheard-of price for a board game.

Compound this problem with the fact that retailers were skeptical that adults would buy and play a board game. Board games were for kids and besides video games were all the rage thought the retailers. The company Abbott and Haney founded, Horn Abbott, LTD, looked like it was doomed before it even got started.

The year was 1981 and a handful of Canadian retailers agreed to stock most of Horn Abbott’s games. Selling to retailers at a big loss meant they would never make enough money to pay their investors back. Then, something startling happened. In 1982, the retailers that had agreed to carry the game started reordering. Maybe there was hope after all. With new enthusiasm that their game could sell, Abbott borrowed $40,000 from his father. They used that money to secure a bank loan for $75,000 and put in an order for 20,000 games.

Abbott and Haney hit the streets with their 20,000 games and by the end of 1982, nearly all of their games had been purchased. They headed for the New York Toy Fair in 1983 with a new purpose. They wanted to find a partner to secure the market in the United States.

After much hemming and hawing and recommendations from Canadian Toy Companies, Selchow and Righter took a leap. They licensed the game and agreed to take over manufacturing. Selchow and Righter was a well-established game company. Not only were they the producers of Scrabble, but they also made Parcheesi. The company dated back to 1867 starting as the E.G. Selchow Company. John Righter joined as a partner in 1980 and the company became Selchow and Righter. Trivial Pursuit had found an American home.

The game was a bonafide hit, and even an established game manufacturer like Selchow and Righter struggled to meet demand. Video Games had lost their luster and people began looking for games to play at cocktail parties. This trivia game fits the bill perfectly. The game allowed 30 Somethings and Baby Boomers to show off their knowledge. It became the first of many “conversation in a box” games that encouraged people to talk to one another.

Clever marketing and word of mouth drove sales. The game became a must-have in many circles. By the end of 1984, Selchow and Righter had sold 20,000,000 copies of the game. At this time sales of 100,000 copies were considered solid. Even sales of the classic Monopoly were only around the 3,000,000 marks per year. But changes were coming.

Selchow and Righter Sell Out

With the huge success, Selchow & Righter became the target for acquisition. One toy company that was licking its chops was Coleco based in West Hartford, Connecticut. Coleco put in a successful bid to buy Selchow & Righter for $75 million in cash and notes.

Coleco purchased all of the rights to the games but not the Selchow and Righter trademark. So, Trivial Pursuit now became the property of Coleco in 1986. Coleco was a very ambitious toy company and they had many plans for expansion. Maybe too many. The expenses of introducing new toys and paying for inventory became too much for Coleco and they filed for bankruptcy in 1989.

The assets of Coleco were sold to Hasbro for $85,000,000 in cash. In 1984, Hasbro had purchased Milton Bradley and went on to purchase Parker Brothers in 1991. Adding the previous purchase of Selchow and Righter, Hasbro’s place in the game business was solidified.

The combination of Parker Brothers, Selchow and Righter, and Milton Bradley now operate as Hasbro Games. The company continues to make new editions of the game and reaps the rewards of strong sales that seem to never end.

As long ago as 1986, it’s estimated that one in four homes owned a Trivial Pursuit game. The company formed by Abbott and Haney, Horn Abbott, LTD also reaped some rewards. All of their investors and the original developers received hefty returns. Private jets, trips to the Bahamas, fancy cars, racehorses, purchasing sports teams, and building golf courses all became commonplace.

Sadly, Chris Haney died in Toronto on May 31, 2010, at the age of 59 following a long illness. Chris will be missed, but he will always have the legacy of Trivial Pursuit.

Trivial Pursuit is responsible for changing the complexion of the game industry. It proved that you could push the ceiling on what people would pay for games. The game proved that kids weren’t the only ones who played board games, adults enjoy them too. And, it proved that clever marketing and word of mouth could actually sell games.

The game created the Adult Social Interactive market segment. Games that owe their existence to it include:

Battle of the Sexes

The game has been so popular that there have been more than 50 special editions including:

There have been Xbox, PS2. CD Rom, VCR, DVD, and App Editions as well including:

Unhinged – for the Xbox and PS2

Lord of the Rings Edition – DVD

In the 1980s a line of game t-shirts declared “I Know Stuff.” The shirt also featured the iconic playing piece with colored wedges. There have been hoodies that said, “Most of my pursuits have been trivial.” The hoodie also featured a line drawing of the TP playing piece. Long sleeve shirts and sweatshirts have been manufactured. There is even a onesie for Babies.

I’ll Drink to That!

Multiple Trivial Pursuit images have been printed on tumblers, cocktail glasses, tall glasses, and beer mugs. I guess companies figured that players needed to refresh themselves during gameplay. What better way to toast the winner!

What’s Next for this Legendary Product?

So, what’s next for the property? In the toy industry, they refer to a product like Trivial Pursuit as an “Evergreen.” That means that the product will be around forever. Surely there will be a Game of Thrones Edition coming out soon.

There appears to be no end for the game because as a society we constantly generate more trivia. Why do people like it so much? It could be that people who “know stuff,” like to show it off.

Tim Moodie is a Freelance Writer, Product Designer, and Inventor who has been in the toy and game licensing business for over 30 years. A year after the release of Trivial Pursuit, he created and licensed Trivia Bingo to Superior Toys. It was the first travel trivia game.

He has worked on the Wayne’s World Game for Mattel, The Hallmark Card Game for Hasbro, The Chicken Soup for the Soul Games for Cardinal, The Mental Floss Game for Pressman, the Top Ten Game for USAopoly, and many more. He is still designing and developing today and hopes to have a new game on the market soon.

You’re on The Story Behind Trivial Pursuit page.

It would seem the game was an inspiration for trivia nights at bars and restaurants around the world. If you’re a player, you might like these pages:

Trivia Team Names for the Clever

Disclosure: As an Amazon.com affiliate, Sports Feel Good Stories earn compensation if you purchase through this link.