You are here: Home / Trivia Team Names for the Clever

Our collection of trivia team names provide some great options for your group to consider for trivia night. Clean and witty, we’ve taken the high ground for our selections. From “Otrivia Newton-John” to “I thought I was speed dating,” we’ll give you plenty to think about.

Even if you don’t win the top prize, you can take considerable comfort in knowing that your group brand is strong.

Are your buzzers ready? Here we go. Good luck. 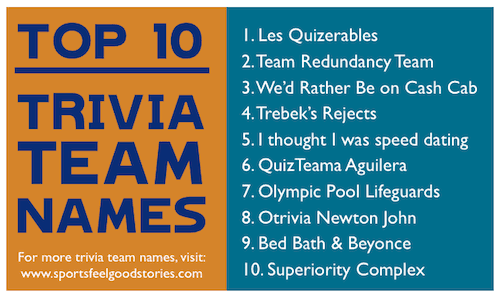 Note: If you have any suggestions for any good trivia team names, please let us know via the contact page.

1.) The best trivia players tend to be big readers with a love of knowledge. They read about a variety of topics. It was interesting that one of the Jeopardy grand champions mentioned that he gained a lot of knowledge from kids’ books.

2.) Watch trivia-oriented shows like Jeopardy. It will help train your mind to think and process questions quickly. Check out radio shows and podcasts as well.

3.) Mind your ABC’s – Always Be Curious. You’ll pick up random facts on visits to the Grocery Store, a walk in the park, or in conversations with neighbors. Ask questions. Learn.

4.) Recruit your smart friends. You know who they are. See if you can convince them to be part of your team.

5.) Read the rules. Many trivia nights are themed to a particular subject matter, that if you have time, you can do some last-minute cramming on. Reacquainting yourself with the subject matter and some details can’t hurt.

6.) Arrive early on the big night. It’s good to be in a position where you can see and hear easily.

7.) As with aptitude testing, it’s usually best to go with your first instinct for an answer.

8.) Understand your goals. Are you looking for some fun and conversation? That’s a good start. Realize that everyone on your team might not be treating this like Olympic training. Meet some new friends on opposing teams.

• What is the only man-made object observable from the moon?
Answer:  The Great Wall of China.

• What is the most popular drink in the world that does not contain alcohol?
Answer: Coffee.

• What country has 8 of the 10 tallest mountains?
Answer: Nepal.

• What is the rarest M&M color?
Brown.

• How many NBA championships did Michael Jordan win?
Answer: Six in the form of two three-peats. (With “The Last Dance” popularity, look for more Jordan questions.)

Mike is the co-author of four trivia books and is editor of Sports Feel Good Stories.

How to Start a Blog