Hank Aaron, the greatest baseball hitter of all time played in a National League city – Atlanta, home of the Braves. Growing up in Kansas City, an America League City, where I first followed the Kansas City Athletics and then the Kansas City Royals, Hammerin Hank didn’t receive a lot of newspaper mentions in the late 1960s.

But, as a baseball card collector, it was hard not to come to know his name. Each year, Topps baseball cards would issue cards featuring the 3 leaders of various baseball categories, and Mr. Aaron would typically find himself among the Home Run Leaders on one card, and among the top RBI leaders on another.

In the early 1970s, newspaper coverage of Aaron changed. An article was published addressing who among current baseball players would have the opportunity to pass Babe Ruth’s all-time home run record of 714. After some careful analysis of home runs hit to date, estimated playing years left, a baseball writer suggested that Hank Aaron was in a pretty good position to break the record. Hank Aaron was in line to surpass one of America’s greatest baseball stars at perhaps the most cherished records in the game of baseball.

With my new strategy in place, I quietly traded for from friends and bought and picked out from 10¢ packs as many Hank Aaron’s as I could. By the time 1974 came and Aaron surpassed Ruth as the all-time home run leader, I had in my possession 107 cards featuring Hank Aaron.

Through the years, I’ve sold many of the cards. I’ve always been surprised that the Hank Aaron baseball cards never seemed to enjoy the type of relative value on the card market that they deserved. Don’t get me wrong, they’re still worth a pretty penny (especially if they’re in good condition), but for a player as great as Aaron, you’d think the cards would be priced off the charts. Much like Hank Aaron the baseball player, the cards always seemed undervalued. Maybe as time passes, Aaron’s status will be elevated. When you review what he accomplished, I think you’ll agree. 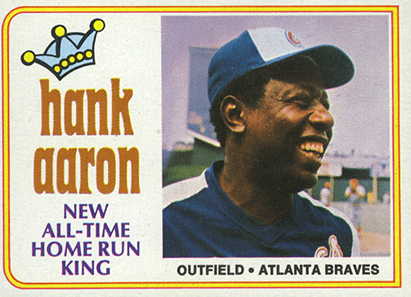 Hank Aaron is considered one of the best baseball players of all time. His story is that of a player who excelled, fought all obstacles of racial discrimination and became a legend against all odds. Hank’s career home run total record was held from 1974 to 2007. He broke Babe Ruth’s record of 714 home runs and ended his career with 755 home runs. The legend of Hank can be easily seen in what boxing legend Muhammad Ali had to say about him: “The only man I idolize more than myself.”

Hank was born on February 5, 1934, in Mobile, Alabama. He was born and raised in a part of Mobile called, “Down the Bay.” His parents were too poor. He practiced with sticks and bottle caps. Latter he made his own bats and balls using materials found on the streets.
As a boy, his baseball inspiration was Jackie Robinson. He started attending Central High School as a freshman and sophomore. Because organized baseball was not a part of high schools at that time, he started by playing outfield and third base for a semi-professional team, the Mobile Black Bears.

Aaron faced racial discrimination throughout the early and later parts of his career. He used to be separated from other players when traveling by bus and was often required to arrange for his meals and housing on his own. Despite all this discrimination, he became the Most Valuable Player in the league and he played the key role in leading Jacksonville to a win. He led the league in all aspects of the game – batting average (.362), runs (115), RBI (125) and hits (208).

When his pursuit of Babe Ruth’s all-time home run record reached a fevered pitch in 1974, Aaron received more and more threats to his life.

Despite all the unjustified discrimination, Aaron continued to ascend the ranks of the Negro Leagues to become an icon in the Major League Baseball. He spent a major part of his 23 MLB seasons playing as an outfielder for Atlanta Braves and Milwaukee. In 1982, he was elected to the Baseball Hall of Fame.

Even today, Aaron holds several records in the sport. These include:

When Aaron broke Babe’s record in 1974, the level of racial discrimination at the time came to the fore in the form of the threats made to Aaron. The Braves started receiving up to 3,000 letters a day for Hank. While some of them congratulated him, many others were shocked to see a black man break the most sacred record in baseball. Many of those letters carried death threats. Despite the threats and obstacles, Hank demonstrated his humble demeanor.

Over the decades, Aaron has been vocal about the lack of opportunity for minorities in the league’s management and ownership. He highlighted this point when he said, “On the field, blacks have been able to be supergiants. But, once our playing days are over, this is the end of it and we go back to the back of the bus again.”

Aaron has been a model of consistency throughout his career. He won his first National League batting title, playing for the Milwaukee Braves, in 1956. The next season he won the MVP. He also played a crucial role in helping his team beat Mickey Mantle and New York Yankees the World Series. He again won the league batting title in 1959.
His batting performances were so consistent that he earned the nickname, “Hammerin’ Hank”. He hit at least .300 for 14 seasons. He hit 40 or more home runs in 8 seasons.

What Others Have to Say About Hank Aaron

Hank has been recognized by legends from different fields, not only baseball. Andrew Young (Georgia congressman) said after Hank broke Babe’s record, “…Aaron has been a model of humility, dignity, and quiet competence….”

Mickey Mantle (Hall of Famer) said, “….Aaron is the best baseball player of my era. He is to baseball the last 15 years what Joe DiMaggio was before him…..”

After retirement, Hank was nominated as the executive vice president with the Atlanta Braves. In this position, he highlighted the flaws in minority hiring in the sport. In 1990, he released and published his autobiography, “I Had a Hammer.”

Aaron was awarded the Presidential Medal of Freedom in 2002. He was also awarded the Japanese Order of the Rising Sun, Gold Rays with Rosette in 2016. The award was honored on him for his efforts for promoting the shared love of the game between the two countries.

Aaron’s legacy expanded in 1999 when the Major League Baseball formed the Hank Aaron Award. It was created as part of the celebration of the 25th anniversary of him surpassing Babe’s record. The award is now given every year to the best overall hitter from each league.

In 1995, director Mike Tollin created a TV documentary on the legend. It was titled, “Hank Aaron: Chasing the Dream” and it celebrated the player’s extraordinary life and achievements. It was aired on TBS as part of the 20th anniversary of his home run title. The documentary was even nominated for Academy Award in 1996.
Aaron’s story is an inspiration for anyone and everyone, not only in baseball but in other sports too.

The Greatest Baseball Hitter of All Time

Having played in an era where PED’s were not available, Aaron’s claim as the greatest hitter in baseball is hard to dispute. The number of hits, slugging percentage, RBI’s and home runs in his career makes his case with clarity.