You are here: Home / The 88 Best Yogi Berra Quotes

You’re on the Best Yogi Berra Quotes – Page 2 of 6 of Baseball Quotations. See Menu at bottom of the page.

For nearly any sportswriter, assembling a collection of the best Yogi Berra lines is a treat. One of the most quoted athletes in Bartlett’s Familiar Quotations, Yogi certainly had a way with words. There are honesty and humility in Yogi’s approach that makes us want to root for Yogi. You will, too, after reading these. Yogi had so many great lines, we couldn’t fit them all on one page. Make sure to check the menu at the bottom to read more.

4. If the world were perfect, it wouldn’t be.

5. Half the lies they tell about me aren’t true.

7. I’d give my right arm to be ambidextrous.

8. I looked like this when I was young, and I still do.

10. The towels were so thick there I could hardly close my suitcase.

How did Yogi get his nickname? Friend Bobby Hoffman, a friend from Yogi’s childhood in St. Louis, gave him the nickname “Yogi” when Hoffman noticed him sitting cross-legged waiting to play baseball. Yogi’s given name is Lawrence Peter Berra.

12. He’s learning me all of his experience.

14. I usually take a two-hour nap from one to four.

15. He can run anytime he wants. I’m giving him the red light. (On acquiring Ricky Henderson.)

16. The towels were so thick there I could hardly close my suitcase.

17. You can observe a lot just by watching.

18. I like to get kidded; that means they like me. When they stop kidding me, I’m in trouble.

19. I just want to thank everyone who made this day necessary.

20. All pitchers are liars or crybabies.

25. The other teams could make trouble for us if they win.

26. Why buy good luggage? You only use it when you travel.

27. I wish I had an answer to that because I’m tired of answering that question.

28. There are some people who, if they don’t already know, you can’t tell ’em.

Yogi was one of six men crew on a Navy Rocket boat at Omaha Beach during the Normandy Invasion of World War II. He received the Bob Feller Act of Valor award for his service.

33. Even Napoleon had his Watergate.

34. He must have made that before he died.

36. I’m lucky. Usually, you’re dead to get your own museum, but I’m still alive to see mine.

37. I knew I was going to take the wrong train, so I left early.

39. He hits from both sides of the plate. He’s amphibious. 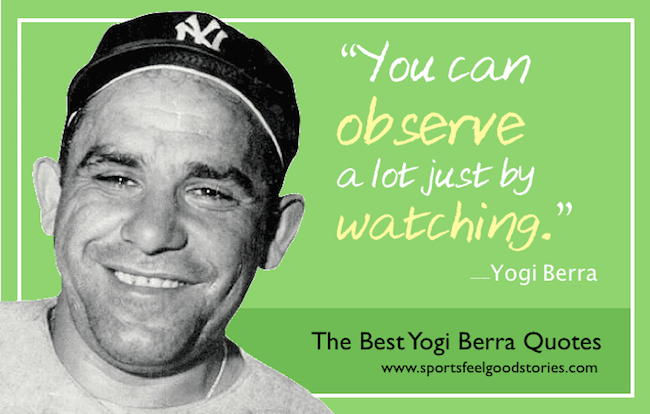 41. I can see how he won twenty-five games. What I don’t understand is how he lost five. (The he refers to Sandy Koufax.)

42. All pitchers are liars or crybabies.

43. We made too many wrong mistakes.

44. The win always seems to blow against catchers when they are running.

46. I never blame myself when I’m not hitting. I just blame the bat and if it keeps up, I change bats. After all, if I know it isn’t my fault that I’m not hitting, how can I get mad at myself?

47. I never said half the things I said.

48. He hits from both sides of the plate. He’s amphibious.

50. I don’t know (if they were men or women fans running naked across the field). They had bags over their heads.

Yogi led the Yankees in RBIs for seven seasons in a row. That’s right, even with a line-up that included legends like Joe DiMaggio and Mickey Mantle, the big RBI guy was Yogi Berra. So, in addition to serving up these funny lines, the guy could play more than a little ball.

51. If you don’t know where you are going, you might wind up someplace else.

52. If people don’t want to come out to the ballpark, how are you going to stop them?”

53. I’m a lucky guy and I’m happy to be with the Yankees. And I want to thank everyone for making this night necessary.

54. If people don’t want to come out to the ballpark, nobody’s gonna stop ’em.

55. It was impossible to get a conversation going, everybody was talking too much.

56. Baseball is 90 percent mental and the other half is physical.

57. In baseball, you don’t know nothing.

58. I’m not going to buy my kids an encyclopedia. Let them walk to school like I did.

59. I never blame myself when I’m not hitting. I just blame the bat and if it keeps up, I change bats. After all, if I know it isn’t my fault that I’m not hitting, how can I get mad at myself?

With all the coverage he’s received for his turns of phrase – frequently called “Yogisms” – the casual sports fan should never lose sight of the fact that Yogi was one heck of a player, coach, and manager. For 19 years, he was the catcher for the New York Yankees and was considered one of the toughest outs on some very strong teams. He was a legitimate American League baseball star.

For 15 of those 19 years, Yogi was an MLB All-Star. He also won the American League MVP three times making him one of only four players to accomplish that feat in history. When talk comes round to considering the best catcher of all time, Yogi Berra is frequently at the top of the list.

Yogi’s records include being the only major league player to appear in 14 World Series and 10 World Series Championships. As a baseball manager, he took teams from both the American League and the National League to the World Series.

As a great player, a World Series Champion and a manager, Yogi left his mark. He was inducted into the Baseball Hall of Fame in 1972 and passed away at the age of 90 years old in 2015.

Yogi wrote a book titled, The Yogi Book: I Really Didn’t Say Everything I Said! Some would say “perfectly titled.”

Another favorite quote, “A nickel ain’t worth a dime anymore.”

Yogi’s logic was sound, even if the results were puzzling, “Always go to other people’s funerals, otherwise they won’t come to yours.”

And, how many baseball announcers have used this line during coverage of a game, “It gets late early out there.”