We’ve put together some famous Yogi sayings that are sure to make you smile and laugh. If you’ve come here first, make sure to check out the Best Yogi Berra #1 – #60.

62. Nobody goes there anymore because it’s too crowded.

64. You should always go to other people’s funerals, otherwise, they won’t come to yours.

65. A nickel ain’t worth a dime anymore.

What number did Yogi Berra wear? #8. It so happens that Yogi’s predecessor as Yankees catcher, Bill Dickey, also wore number 8. Both catchers had that number retired by the Yankees.

67. Surprise me. (Responding to his wife Carmen’s question: “Yogi, you are from St. Louis, we live in New Jersey, and you played ball in New York. If you go before I do, where would you like me to have you buried?”)

68. You should always go to other people’s funerals; otherwise, they won’t come to yours.

70. I never figured I’d go into the Hall of Fame. A kid from the Hill. 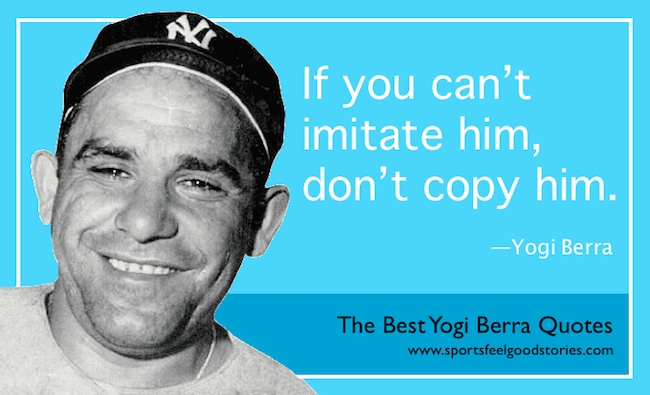 75. In theory, there is no difference between theory and practice. In practice there is.

76. You better cut the pizza in four pieces because I’m not hungry enough to eat six.

77. I think Little League is wonderful. It keeps the kids out of the house.

80. I wish everybody had the drive he had. He never did anything wrong on the field. I’d never seen him dive for a ball, everything was a chest-high catch, and he never walked off the field. (Referring to Joe DiMaggio.)

Yogi Bear, the famous cartoon star, was named after Yogi Berra (or Yogi Berr if you prefer).

Check out Baseball Captions and Sayings.

81. Little League baseball is a very good thing because it keeps the parents off the streets.

82. Ninety percent of this game is half mental.

83. How can you hit and think at the same time?

84. Love is the most important thing in the world, but baseball is pretty good, too. 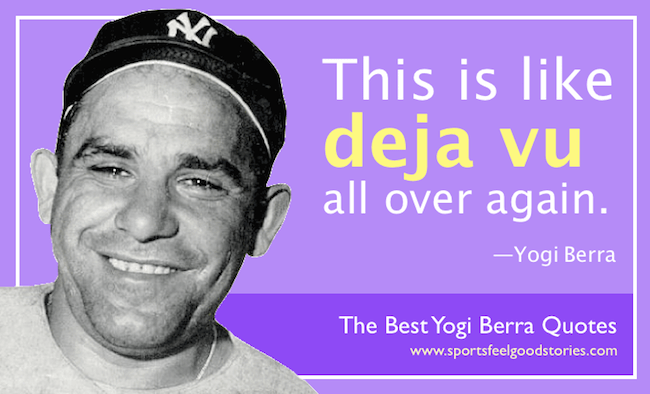 86. I always thought that record would stand until it was broken.

88. Bill Dickey is learning me his experience.

Check out the “Get to know Aaron Judge” page.

89. I don’t know. They had bags over their heads. (If the fans were men or women running naked across the field)

90. Congratulations. I knew the record would stand until it was broken.

91. You’ve got to be very careful if you don’t know where you are going because you might not get there.

Check out our Fantasy Baseball Rankings By Nik Ebert

Yogi is the most relaxed hitter I ever saw or faced. What a guy! In spite of all the great things he’s accomplished over the years, he’s lost none of his humility and none of his niceness. He’s truly one of nature’s noblemen.
Bob Friend

Yogi had the fastest bat I ever saw. he could hit a ball late that was already past him, and take it out of the park. The pitchers were afraid of him because he’d hit anything, so they didn’t know what to throw. Yogi had them psyched out and he wasn’t even trying to psyche them out.
Hector Lopez

People think Mickey Mantle is the toughest hitter in the league, but I can usually get him out if I don’t make a mistake. The real toughest clutch hitter is Berra. As you change speeds and move around, Berra moves right with you. Rosen does the same thing, but fortunately, he’s playing third behind me so I don’t have to pitch to him. Believe me, the two best clutch hitters in the game are Berra and Rosen. Most of us pitchers wish to hell they’d switch to golf.
Early Wynn

(Yogi reminds me of) the bottom man on an unemployed acrobatic team.
Larry MacPhail

Yogi Berra was the New York Yankees star catcher noted for World Series heroics and home run power. An American League legend, he played 19 seasons in the majors and was an 18-time all-star. He wrote a book with Dave H. Kaplan entitled You Can Observe A Lot By Watching: What I’ve Learned About Teamwork From the Yankees and Life.

Yogi is noted for a series of famous quotes like, “When you come to a fork in the road, take it” and “we made too many wrong mistakes” that has affectionately become known as “Yogisms.”

For anyone who has struggled to hit a curveball, how can you not like this Yogi take on hitting: “I never blame myself when I’m not hitting. I just blame the bat and if it keeps up, I change bats. After all, if I know it isn‘t my fault that I’m not hitting, how can I get mad at myself?”

Read more on Yogi at the Baseball Hall of Fame site.