There is a new sensation in baseball and he is from Japan. He is on a record-breaking spree and if we are to go by the numbers (and even performance on the field), it would not be wrong to claim that he is the Japanese equivalent of the legend, Babe Ruth. The player is Shohei Ohtani.

This 23-year old international player is a pitcher, outfielder and a remarkable hitter who is making his way into the Majors from Japan’s Hokkaido Nippon-Ham Fighters. Like Ruth, he is both a pitcher and a hitter and has already stunned both fans and sports experts with his ability to play both positions at a very high level. He plays in the Nippon Professional Baseball Pacific League or the NPB.

Can he really pitch? Well, let’s start with the fact that Ohtani has the official, fastest pitch by any Japanese pitcher. His pitch at 102.5 mph is the fastest in the history of NPB. 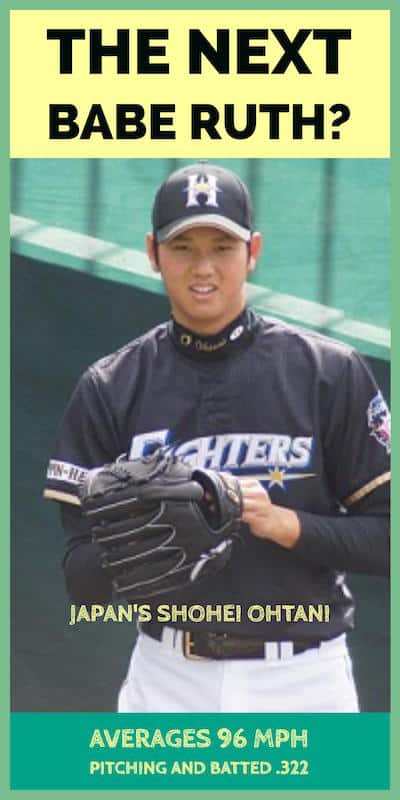 The way things are going for this extraordinary Japanese baseball player, he is all set to be the next big thing in the Major League. This starting pitcher has an overhand delivery and averages 96.2 mph with his 4-seam fastball, and equally impressive solid sliders, forkballs, and curveballs. He is already great, but there is still so much room for him to improve. He is often touted as the next Justin Verlander, but many think that he is even greater and is the next Babe Ruth from Japan.

Shohei Ohtani has been performing at levels and churning out numbers that have even bettered the numbers put out by the likes of Clayton Kershaw. His last season comprised of 20 appearances with a 10-4 record and 1.86 ERA. The Japanese player has an average of 11.2 strikeouts per 9 innings that beats Kershaw’s. The LA Dodgers’ starting pitcher has an average of 9.80. Randy Johnson tops the MLB with his 10.6 strikeout average per 9 innings and Ohtani beats even that.

The new Japanese sensation is not just a great pitcher, he is also a promising hitter. He had 22 home runs in 382 plate appearances in the last season. That is something that betters even the likes of Mike Trout and Bryce Harper. Ohtani hit 18 doubles and 67 RBI. He scored 65 runs and took 7 bases. His OBP was .416 and he batted .322. The designated hitter also won Central League and Pacific League’s Best Nine award, the highest award of its kind in Japan. He also has a Pacific League MVP under his belt.

It’s hard to come by a great pitcher who is also a great homerun hitter. He has been a dominant pitcher throughout his pro career. Last season he pitched in 21 games and recorded an ERA of 1.86, his career-best. As already mentioned above, his 10-4 record is stunning. In his 140 innings as a pitcher in the season, Ohtani struck out 174 batters. There were 4 complete games and a shut out.

He also had a great season as a hitter. There were 22 home runs in his last season with a total of 40 in his career. Ohtani’s batting average is .275. It is just the beginning of his career and this Japanese ace has already impressed both his Japanese and global fans.

Ohtani is one of those few baseball players who prove that you can perform both ways. Most pitchers don’t want to develop with the bats or want to spend more time practicing their sliders. And there is nothing wrong with it too. But having players who are good at both can help teams explore new opportunities.

Yankee legend Joe DiMaggio once said of Ruth, “To understand him, you have to understand this: he wasn’t human.”

Shohei Ohtani is not your routine Japanese baseball player you come across too often. He has often been called a man among boys in his country. Standing at a staggering 6’4” and weighing over 215 lbs, he is quite above the standards for Japanese players. And his muscular build doesn’t help him look like he belongs to the pack when in the field.

It is not just for his massive frame, he is a great pitcher also for his precision control of the ball’s flight paths. The right arm pitcher is capable of delivering highly precise pitches that many claim to even defy the laws of physics. Players recall that every time he sends them at the hitter, the whistling sound could unnerve even the best out there.

Brings a Japanese fan base to MLB

2016 was Shohei Ohtani’s fourth pro season when he played with the Hokkaido Nippon-Ham Fighters. He is set to stay there for the 2017 season too. It is expected that he may have to wait for another season to be able to enter the Majors. The rules currently put a cap on his salary. Many say that the player will be worth hundreds of millions of dollars when he enters the majors.

He is already a sensation in Japan. When he makes his way to the Major League, he is going to bring his large Japanese fan base along. This may not be the first time that a Japanese player may make his way to the MLB, but this is going to be a big occasion when a player of such caliber and frame does it. There have been dozens of players who made their way into the most happening league in the world. This included the likes of Ichiro Suzuki, Hideki Matsui, Hideo Nomo, and Yu Darvish to name a few. Shohei Ohtani is expected to not only bring a better package but he also likely to become the biggest earner among all of them.

Ruth is considered the most famous player in history for his remarkable home runs, but he was also an excellent pitcher. In the 1916 and 1918 World Series, he had 29 consecutive scoreless innings, a record that is unmatched to this day. Even though he pitched in only a few more games after that, he brought to the game a complete package as a young player. And Ohtani also seems to have made a similar start. Ohtani is both a great pitcher and hitter and when he makes his way into the Major League, he is going to be in great demand.

The current best-hitting pitcher has a career average that is amusingly low compared to Ohtani’s. When he enters the Majors, it will be worthwhile watching how teams adapt to a new kind of game. Many claim that he could be signing up for at least $200 million. How the MLB plays out with the rules is going to have a big impact on how much it is going to be for this exceptional talent. The new rules put a cap on how much a team can spend to bag an international free agent. If Ohtani can wait a couple more years, he is certainly going to get record signup.

Many have expressed their concerns about MLB’s new rules and want the old rules to be applied when it comes to players as unique as Shohei Ohtani. But MLB doesn’t seem to be bothered much about talent. MLB wants to stick to its new rules that keep out young international talent for some inexplicable reasons. As and when he enters the Majors, Ohtani is certainly going to bring about some big changes in the perception of the game – we will be able to see more new young guys who would be focusing on developing both on the mound and at the plate.

Andy is a sportswriter living in St. Paul, Minnesota.