You are here: Home / Basketball / The YMCA’s Contribution to Sports

It’s said that most Americans have a YMCA story. Some took their first swim lessons there. Others went to summer camps. While some went regularly on Saturday mornings with the family.

Then, of course, some folks know it from the Village People song that crashed the radio airwaves in 1978. YMCA buildings, pools, and gyms seem omnipresent in towns throughout the country.

With so much history associated with the YMCA, one can lose sight of the fact that it has been a major contributor to innovation in sports. The YMCA’s contributions to sports have been more than impressive.

Now more frequently referred to as the “Y”, just what else is there to know about the organization? In this article, we take a dive deep into the history of the YMCA, its contributions to sports innovation, and the impact its legacy has made in the world today.

YMCA: A Review and Perspective on its Impact

Originally started by Evangelicals, the YMCA is one of the largest non-profit community service organizations in the U.S.

Although the idea of it was unusual, as it crossed social and economic boundaries in those days. This openness was a special trait that would eventually lead to the inclusion of women, men, and children no matter their religion, nationality, or race.

Despite its religious origins, today, it was the YMCA of the USA that first grasped the importance of offering physical education to young men. It was a way of meeting the needs of the whole person.

More than sports and recreation, the Y also meets the social need of the community. It engages in a variety of community services such as volunteering, distributing emergency relief as well as child-care and teenage programs, and so much more. 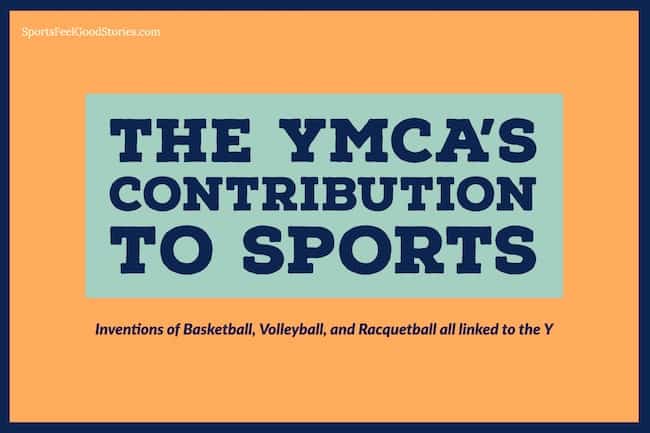 The Roots of the YMCA

In the 1800s, London, England was a growing industrial metropolis. However, life was made incredibly tough during the big arising of the Industrial Revolution. At work, men typically worked every day of the week and over 10 hours a day. Many often slept at their workplaces in crowded rooms.

Outside of work, there were many other worse things to worry about. Homeless beggars, drunks, mobsters, abandoned kids, open sewers, petty criminals, and beggars flooded the streets. Certainly, industrialized London was a place of great turmoil and despair during this time.

Fortunately, on June 6, 1844, George Williams founded the Young Men’s Christian Association (YMCA). Primarily, it was in response to these unhealthy working and living conditions.

Born a farm boy in 1821, 20 years later Williams migrated to take a position in a draper’s shop as a sales assistant. Williams was concerned that London’s harsh work-life and negative urban influences. He believed it had a negative impact on the young men of London.

Williams along with his other fellow drapers decided to organize the first YMCA branch.

Their main objective was: to improve the spiritual condition of young men seeking refuge from the hazards of street life. To accomplish this, the YMCA would provide a safe and secure place as well as foster healthy ideals through Bible study classes and social prayer meetings.

Together, Williams and the other members of Y.M.C.A. quickly started to organize branches throughout Ireland, Scotland, and more areas in England.

To honor Williams, he was knighted by Queen Victoria in 1894 as Sir Williams and also honored with a burial upon his death. But, just how did the YMCA find it’s way all the way to America?

Thomas Sullivan Brings to the YMCA to the U.S.

Well some years later, marine missionary and retired sea captain and Thomas Sullivan, felt that there was a similar need in his field of work after visiting a YMCA in England. Sullivan lived much of his life at sea and began to believe that his men too, needed a secure place to have away from home.

On December 29, 1851, an eager and inspired Sullivan created the first YMCA branch in Boston at the Old South Church.

Currently, there are more 10,000 YMCA locations all throughout the U.S. Amongst its amazing contributions to the history of sports, perhaps the YMCA’s invention of basketball, volleyball, and racquetball are three of the most well known.

Because the Y has contributed in so many ways to how many of us were raised, it’s easy to forget about its contribution to sports innovation.

Well, the YMCA has put its thumbprints on some significant aspects of sports.

Basketball was invented in 1891 by phy ed instructor James Naismith in Massachusetts in YMCA Springfield’s gym. Naismith was asked to create an “athletic distraction” to free his class from boredom during the winter.

The new game he came up with involved a few simple things: two goals and a ball. To limit the roughhousing inherent in other sports, Naismith established techniques teamwork that prohibited moving with the ball and allowed for non-violent intercepting passes. Initially, Naismith wanted to use a pair of boxes as goals, but the building superintendent could only find peach baskets at the time.

Since smaller balls required equipment to handle. It was played by nine players split into a team of two using a soccer ball and two peach baskets nailed at both ends of the gym. On January 15, 1892, the first rules made by Naismith were published, thus, the world’s most popular sport basketball was born. 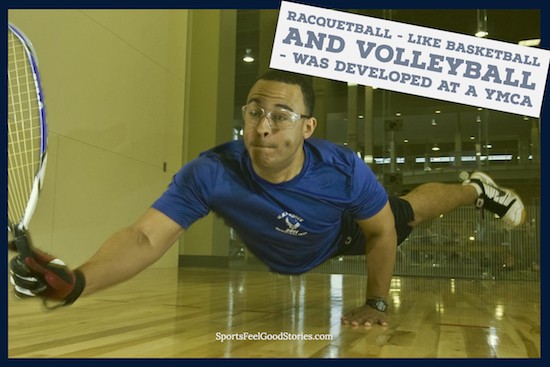 Racquetball is another Y-invented sport created by professional squash, handball, and tennis player Joseph Sobek. Sobek had difficulty finding other skilled squash players that matched him and were dissatisfied with the options for indoor sports in Greenwich, Connecticut.

So, during the 1940s, he started the rules for the racquetball game he called “paddle rackets.” It involved short, stringed rackets, paddles, and a children’s toy rubber ball, which was played in handball courts.

Sobek was working in a rubber factory and designed the original rubber ball, which was half red and half blue. When replacements were needed, Sobek would reach out to the original manufacturer, Spalding to make the balls all blue to prevent marks from being made on the courts.

Balls, paddles, and rackets of the game had taken many shapes and forms over the years, as the search for the ideal model of each continued. Nonetheless, the popularity of the sport grew as more athletes came to notice its high intensity, giving them a great workout and building up a sweat while playing.

Invented by William G. Morgan n Holyoke, Massachusetts, the sport volleyball soon followed after the invention of basketball in 1895. The YMCA instructor wanted to create a game for older men, which had less physical contact than basketball. First called “Mintonette”, the game involved a tennis net, raised 6 feet, 6 inches above the floor, which was played in gyms, exercise halls, or in the open air.

The objective of the game was to keep the ball in movement over a high net from one side to the other and like these sports, encourage participants to work together and forge new friendships

Since the object of the game was to “Volley” the ball, an observer suggested the name of the sport be changed to “volleyball”, after seeing the demonstration of the game. He agreed and provided handwritten rules as a guide for the use and development of the game, appearing in the Spalding Athletic Library Publication in 1917.

Other Sports and Recreational Activities

In 1909, Canadian swimming enthusiast George Corsan, designed group swimming lessons at a Detroit YMCA. Corsan was the first instructor to teach the crawl stroke and also pioneered breathing methods according to the International Swimming Hall of Fame. 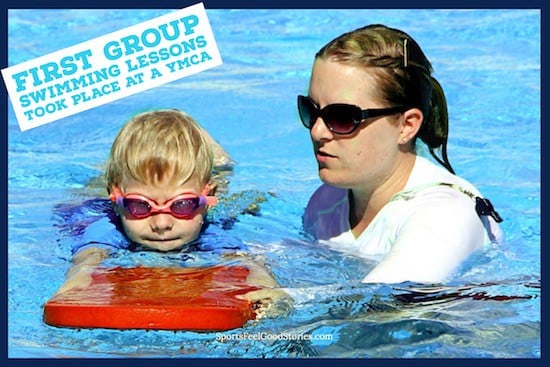 Historians claimed that the first YMCA buildings included gyms opened in 1869. A YMCA staff member by the name of Robert J. Roberts first coined the term “bodybuilding” in 1881, also organizing exercise routines that can be seen in fitness classes today.

Founded in 1885 in New York, the YMCA’s Camp Dudley (no longer owned by the Y) is one of the first known summer camps for children in the U.S. It is said to be the oldest operating American summer camps today.

Through basketball, volleyball, and racquetball, the Y has impacted international sports more than any other organization in the world. The Y’s current sports programs — the ones we invented and the ones we didn’t — don’t just promote health and fitness, but also social interaction, a sense of belonging and friendship.

These sports have become popular in the United States very quickly, and have spread to other countries as well, also added to the Olympics. Although best known today for its athletics programs, but as we will learn in this lesson, it’s much more than that

18 Million Americans Served by the Y

Now serving more than 18 million people in America alone, the Y has made a major impact by standing strong to their mission: meet the needs of the developing person through physical education. According to researchers over at Dartmouth University’s Hood Center for Children and Families, this mission was affirmed inside and out.

It was found that playing sports significantly lowers a person’s risk of obesity, as well as diseases associated with being overweight. Besides the obvious benefits of promoting health and fitness, physical education has served many purposes in the Y. Not only does the organization encourage social interaction, a sense of belonging and friendship, but it also serves to promote virtuous ideals and values by fostering a team spirit and working together to achieve healthy lifestyles.

Rather than encourage individualism, sports should be about bringing people together. The Y has and continues to leave lasting memories for children, adults, and families. It has left a truly remarkable legacy that is still being played out today by millions of members across the world.

Mel is a freelance writer based in Minneapolis, Minnesota. Mike, editor of Sports Feel Good Stories, is a past board member of the Eagan YMCA in suburban St. Paul, where he’s been a member for some 25 years.

You’re on the YMCA’s Contributions To Sports article.