Our Tyson Fury quotes will shed some light on the reigning heavyweight champion of the world in the sport of boxing. Born in England, and raised an Irish Traveller, Fury is a giant among fighters standing 6’9” tall and usually weighing well over 250 pounds.

Check out some of the notable Tyson Fury quotes below followed by some FAQs and answers on this living legend.

1.) You can take a man out of Ireland, but you can’t take the Irishness out of the man.

2.) I’m not even scared of the devil. If the devil confronted me, I’d confront him as well.

3.) He told me I couldn’t come back. I was too fat. I was finished. So it gave me the motivation to come back.

4.) People can say what they want about me. But I’ve got a big heart and will keep going.

5.) At the end of the day, we’re all brothers and sisters in God. What people do is none of my business.

6.) Whatever is conventional, I am the opposite. So if you want to walk in a straight line, I am going to walk in zigzags. If you want to throw a one-two, I’ll throw a two-one.

7.) If anyone wants to abuse other people for whatever color, race or creed they are, then it’s just stupidness, isn’t it? 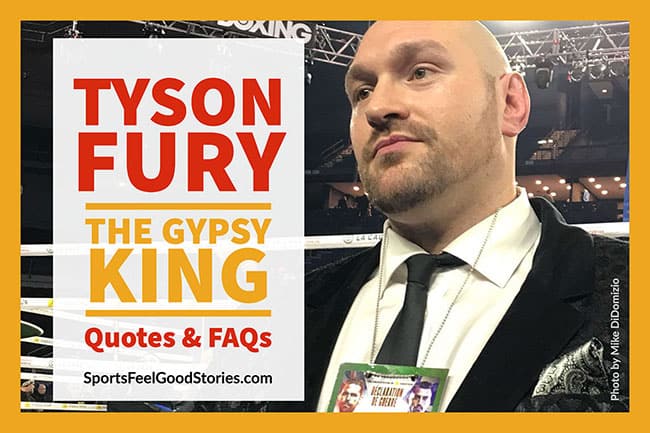 9.) I believe all women look good in dresses; is that a crime?

10.) Goliath was a champion, a monster who had never been beaten, and then this young guy, David, came forward, and a child who believed in God and did it.

11.) I’m all for it. I’m not a sexist. I believe if a man can go to work all his life a woman can. Who am I to say ‘don’t do that cos you’re a girl’?
Racism is a sign of ignorance, in my opinion. It is people who haven’t been anywhere, haven’t seen the world.

13.) I don’t have a hometown, ‘cos I’m a traveller. I travel around the world, I pull my trailer up beside someone’s garden, make a mess, and then leave – that’s why I’m the Gypsy King!

15.) Everything is possible through God, and I’m living proof of that.

Check out The YMCA’s Contribution to Sports

16.) The past is in the past. What happened yesterday is history. I look forward to the future on a daily basis.

17.) I had everything but it didn’t mean anything. I wanted to die on a daily basis. So material goods are only good for when things are going right in your life.

19.) I was way out of control. Something needed to happen, and it did.

20.) Mental health has got to be the biggest battle I’ve ever fought with, more than any opponent.

22.) Every time I stray away from the Lord’s word, I find emptiness and darkness.

23.) I fight for those people: all the oppressed, depressed, alcoholics, drug addicts. I fight to give them hope every day so they can wake up in the morning and know there’s somebody out there banging for us.

24.) I thought I’ve got a great platform to spread awareness about mental health, especially in sports. And if the heavyweight champion of the world comes out with these problems, and it’s okay for him to come out and talk about it, that should encourage others to come out and talk about it. Because as big and tough and supposed as a great fighter I am, it can bring anybody down. Nobody is unstoppable from mental health problems.

25.) People really don’t understand mental health problems unless you’ve been through it. Looking from the outside in people say well, that’s an idiot. He’s got everything going for him and he’s still not happy. If I knew what it was, then I’d have fixed it straight away.

26.) You can have everything in life and feel like shit on a daily basis because no one can see inside the mind.

27.) Nothing can make depression go away except medical advice and seeking medical help basically.

32.) All I care about is providing and living every day. I don’t care about world titles, being a legend, or being a hero.

34.) I am fighting royalty. I have gypsy kings on both sides of the family.

36.) There’s never been someone like me in history – a fighter like me only comes along every 1,000 years.

37.) Boxing is about hitting your opponent and not taking any in return, that’s the way I look at boxing.
To come back from the brink of no return to get back to the top of the world, that’s gonna be a statement for mental health itself.

38.) Exterior assets mean nothing if you can’t control what’s going on inside.

39.) When I make my mind up on something I just do it; I don’t take no prisoners, I don’t beat around the bush, I don’t play games, I don’t play at boxing so whatever I want from boxing I take.

40.) I’m a gypsy: no education, no schooling, nothing. I don’t care what people think of me. I don’t care about being a hero, a role model, a champion.

41.) I’ve got an outspoken personality, which gets people thinking, and my style of fighting is aggressive. Everything’s on the line all the time. In my fights, there’s drama.

42.) I’m just going to stand and trade punches with him, whoever wins, wins, and whoever doesn’t, doesn’t. I’m going to lift a lot of weights, stand there and have a big slugfest with Wlad.

43.) There are 7 billion people in the world, but there’s only one heavyweight champion of the world, and that’s me.

44.) When I’ve beat Deontay Wilder, I’ve just beat another bare bum in the shower with a pair of boxing gloves on. Just another tick on the record.

45.) It’s not about how much money I’m getting paid. It’s just a love of one-on-one combat. I feel I’m at home. I love the ring entrances, the talking. I’m the master of it all.

46.) I’ll just fight anybody, the local binman, anything. As long as I can keep active and keep busy.

48.) Everything I do is controlled… I don’t see boxing as a big ‘Aaargh!’ It’s a fight, it’s not a violent thing to me, boxing. It’s a sport, it’s not an aggressive thing.

From Fury’s autobiography Behind the Mask

Hope you enjoyed tonight’s episode. 2 Days to Wilder…This was me the night before I beat Klitschko. #Relaxed. Read more in my autobiography Behind The Mask. Link in bio pic.twitter.com/KKNheeuM0Q

After seeing news reports of the Wilder vs. Fury 2, folks had lots of questions about Mr. Tyson Fury. Here are some of them.

How tall is Tyson Fury?

How much does Tyson Fury weigh?

How old is Tyson Fury?

Who is Tyson Fury named after?

His first name comes from the legendary boxer, Mike Tyson. His father John, a professional fighter himself, named him.

Where is Tyson Fury from?

Tyson was born in Wythenshawe, Manchester, England. Fury is an Irish Traveller.

How many brothers does Tyson Fury have?

Tyson has two brothers, Shane Fury and John Fury Jr., and one half-brother, Tommy Fury. Tommy is also a boxer. Tommy has gained some fame from being a reality tv show star, as well.

What is Tyson Fury’s boxing record?

After beating Deontay Wilder in their second fight, Tyson Fury’s boxing record is 31 – 0 – 1. Notably, 30 of his wins are by way of knockout. His one draw was in his first fight with Deontay Wilder.

What is Tyson Fury’s reach?

What is Tyson Fury’s net worth?

Tyson Fury’s net worth is estimated to be around $40 million. It is thought that Fury made around $5 million for his second fight with Deontay Wilder.

What does it mean to be a lineal champion?

A lineal champion can be claimed if a fighter has beaten an undisputed and reigning champion in a weight class. Tyson Fury is a lineal champion because he beat Wladimir Klitschko who was recognized as the heavyweight division’s champion.

Why is Tyson Fury called the Gypsy King?

What’s next for Tyson Fury?

Fury has indicated that he’d like to fight fellow British boxer, Anthony Joshua. But, one thing stands in his way. Deontay Wilder, per contractual agreement, is entitled to a mandatory rematch with Fury. Wilder has already expressed interest in a Fury vs. Wilder III. Fury will have something to think about as he considers the next steps.

Nick is a sportswriter based in Las Vegas.

You’re on the Tyson Fury quotes and FAQs page.