Our Cam Newton fantasy football names will provide you a great moniker for your team if you’re able to acquire Super Cam Newton. Newton had a break through fantasy football season in 2015 and is a constant threat both running and passing. Bigger than many of the defenders attempting to tackle him, many suggest that Newton has taken a lot of unpenalized hits because of his size and strength.

With the ability to regularly throw for 300 years and multiple touchdowns, along with his proficiency to run for yards and TDs, he’s an outstanding fantasy QB. Plus, his name lends itself well to many pun variations. 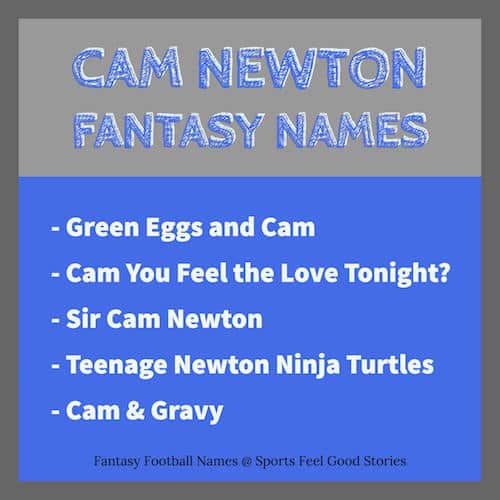 What triple header did Cam Newton win that no other modern player has achieved? In a year, Cam Newton won the Heisman Trophy, the National Championship and was the first pick of the NFL Draft. Not a bad year for Mr. Newton, to say the least.

Check out our Funny Fantasy Football Names List for 2015.

What quarterback rushing record does Cam Newton hold? Cam has the most rushing touchdowns in four seasons with 33 touchdowns. That would be pretty good for a running back, let alone a quarterback. His running skill was clearly on display in college where in addition to throwing for 2,000 yards in a season, he also rushed for 1,000 yards.