You are here: Home / Sports / How to name your team — and win the name game

When you try to name your team, you quickly realize that it’s a group exercise. We’ve all been told there is no “I” in team. But there is a “me” in “team names.”

We all want to be the hero who comes up with the moniker that everybody says was made-to-order for your team. So… whether it’s for a fantasy football team, a trivia squad, or your carpool group, we’ve got plenty of suggestions to help your team sound like a winner.

The first thing you’ve got to decide is what category of name suits your team. If you and your teammates are a little wild and crazy, you’ll want a name that reflects that. On the other hand, your group might be more comfortable with something more mainstream. 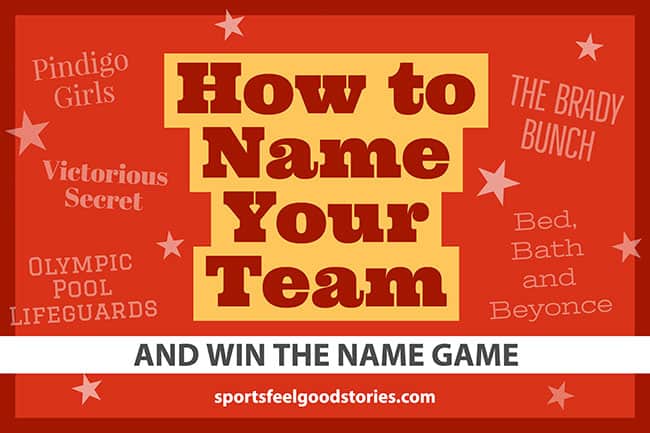 OK, just as Rover, Spot, and Fido are the default names for dogs, there are some pretty typical names for teams. These names won’t win any awards for originality, but they must have something going for them — teams keep using them. You know the names we’re talking about: Chargers, Bandits, Wildcats, Flyers, Spartans, Hornets, et al.

They all suggest action or aggressiveness, which can certainly be valuable qualities in a competitive or challenging situation. The downside is that these names are generic. Anyone could use them. So you might want to look for something that helps to set your team apart from the rest.

Your group might have an organizer or captain or coach who inspires all its members. So if your buddy Sam puts together a fantasy basketball team, you can be the Sam Dunks.

If your BFF Trudy has what it takes to get the girls into a volleyball tournament, the team becomes Trudy’s Grit. And when Frank, your neighbor down the street, recruits a roster for weekend softball at the nearest sandlot, you’re bound to christen yourselves the Ballpark Franks.

If you want more star power in the team name, bear in mind that famous athletes will be more than happy to lend you their name free of charge. Draft Tom Brady for your squad and it’s an even-money bet that your fantasy football team name become The Brady Bunch. You’ve got other options if you like Zeke Elliott (Zeke & Destroy), Saquon Barkley (Saquontum Leaps), or Patrick Mahomes (Rollin’ with Mahomies).

None of the fantasy football names will work if you’re getting ready to field a women’s soccer team. But the same naming rules apply. You’ll strike fear in the hearts of your opponents when they see your jerseys read Rapinoes to the Grindstone.

Most people are proud of their hometown. Most teams are too. That’s why virtually every pro sports team uses their hometown or state as their team’s first name: So you’ve got your Detroit Tigers, Los Angeles Rams, and Boston Bruins.

Of course, it’s always a plus when the last name also relates closely to the town or geographic location. Detroit isn’t especially well known for its tigers, nor is L.A. the ram capital of the world. But the Minnesota Timberwolves, San Francisco 49’ers, and the Colorado Avalanche — these teams make the most of their distinctive geographic attributes.

Another way to enhance the popularity of a place name is to use alliteration, having the first letter of the last name begin with the same letter/phonetic sound that begins the first name: the Philadelphia Phillies, Pittsburgh Penguins, and Bucknell Bisons all do that — and that’s just teams in Pennsylvania!

The Rhode Island Rams use alliteration (but it begs the question, how would their rams fare if they butted heads with the ones in L.A.?) The Atlanta Braves have had some pretty good teams — and so did the Milwaukee Braves before them — but not as sweet-sounding a name as when they started out as the Boston Braves.

Yep, your team can make a name for itself out of what it wears. Just ask the Chicago White Sox or the Boston Red Sox.

Or maybe you’ll want to combine a place name with the color of your outfits. That’s particularly easy if your team wears green and plays out of Bowling Green, Kentucky. And the Bowling Greens becomes even more appropriate if your team happens to be in a bowling league).

If your team is from New Jersey and you don’t mind a little redundancy, fans are sure to take a fancy to the Jersey Jerseys.

Let’s suppose your fantasy football team owner group comprises four people. Naturally, you’re going to be The Four Downs. Then you decide that, rather than just play the odds, you want to actually play a game.

So your quartet joins a bowling league. The Four Downs becomes The Four Spares until one of the guys drops out — he didn’t like the fact that you guys were always blaring loud music while you bowl. The Four Spares becomes the mp3s. Sometimes you’ve got to roll with the punches.

The point is, you should consider the number of players on your team. Chances are that number will lead you to a creative name. 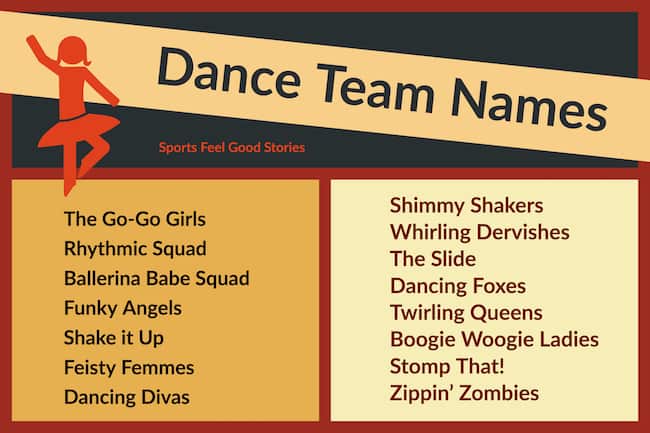 Put a new twist on an old standby

Start with something everybody knows. It might be anything from a retail store to a TV show, or a character in a show. Homer Simpson can be the spark that ignites your baseball team’s name: Homer Slamsome.

Relying on borrowed interest can be a highly creative approach to naming. You know how popular Game of Thrones was. Your basketball team can generate that much buzz when you become Game of Zones. Your team will be able to hold its own even when you’re up against a hard-snacking opponent like Dunk’n Go Nuts.

Let your sport inspire your name

Every sport has its own lingo. That means you have a lot of opportunities to create a memorable name related to that sport. Tennis? The NetWorkers. Hockey? The Icemen Cometh. Bowling? Lightning Strikes. Football? The Run-Around-The-Blocks. Basketball? The Hoopsters. Little League? The Little Loopers.

Simply make a list of possible terms and then try to find an appropriate double meaning for that term. In soccer, they throw passes, so become The Pass-ive Aggressives. Golfers want to get that ball in the hole, so start imagining yourselves as Hole Hogs. Baseball players wield bats, so transform yourselves into the Bats out of Hell.

Everybody can’t be a Michael Jordan or Serena Williams. But almost everybody’s a member of some sort of team. Are you in an exercise group with a bunch of 60-somethings? Make it more official by giving them a name: The Seventh Inning Stretchers.

Maybe you work on an assembly line. You and your fellow line workers are responsible for getting a certain amount of product through in a certain amount of time. When you decide to go to management and demand a raise, you’ll make more of an impression if you all go in wearing T-shirts that let the bosses know you’re The Line Drivers.

Like to share ads with friends? Why don’t you all become Ad-dicts? Or possibly you’re in an informal online group that enjoys sharing hotel reviews. Make it a little more formal. Make everyone part of The Inn Crowd.

Are you into trivia team names? If you’re a trivia buff, start a group entitled I Am Smarticus — and don’t be surprised when dozens of others chime in by proclaiming I Am Smarticus as well. (If they’re true trivia buffs, they’ll be familiar with the 1960 Spartacus film that popularized the expression).

But, if you’re a more serious competitive academic team, you might prefer a sobriquet such as The Know Betters or Academia Nuts.

The language is constantly changing because of the Internet. In fact, a book came out discussing those changes. The title of the book is Because Internet and that title relates to how Internet users — in order to save time and cut keystrokes — are now beginning to speak in shorthand as well. So you can convey that your team is cool and current — and even convey how motivated you are — with a concise, three-word name: Because Must Win.

Team names that incorporate the latest ”in” words let everyone know your group is a “happening” team. Take the word “woke,” for instance. By 2019, it gained mainstream acceptance as more than just the past tense of “wake.”

Aware of and actively attentive to important facts and issues.

So if you want your team to be known as the ones who are actively attentive to something important (winning), you could become The Woke Blokes. Or simply, Woke!

Another way to display your cool: Show you have a sense of humor. If you’re a baseball team, maybe you’re The Spitting Images. If you’re searching for a bowling team name, and in a bowling league that prizes comradeship over competitiveness, maybe you’ll want to poke a little fun at yourselves. Let everyone see that they’re watching The Splitting Headaches.

Everybody’s familiar with the after-the-game fireworks. But how about making your team The During-the-Game Fireworks?

Maybe you’ve got the kind of team that never gives up. Never Give Up is a little lame. But ’Til the Fat Lady Sings suggests “never giving up” in a way that engages and amuses your fans.

Once in awhile, nonsense makes sense

You could always give your team a nonsensical name like Pocket Comb or Day After Tomorrow. Or simply close your eyes and point to some crazy word in the dictionary — I just tried it and came up with neapolitan. Names like these will not do much to instill a sense of loyalty among your fans or a sense of belonging among your teammates.

What they will do is get people talking and wondering and guessing. So if your goal is simply to gain attention, you might go the nonsense route. But if you want to be taken seriously and gain the allegiance of the community, nonsense makes no sense.

Name your team — It’s all about attitude

Your team is comprised of flesh-and-blood people. So consider a name that reflects the humanity of your team. If your teammates are the laid-back type, give yourself a name like The Even Keels. Or put on your Game Faces.

But it’s more likely you’ll want your team name to project charisma and generate excitement. So be tough: The Winning Uglies. Be dynamic: The Hit’n Missiles. Be troublemakers: The Devil’s Advocates. And let them know you’re going to deliver what these drastic times require: Drastic Measures.

Hopefully, we’ve got you thinking about how many great names are out there — and how important a name can be to your team. The right name can create a great first impression — and leave a lasting impression. It can help establish an identity for your team members, build recognition among your opponents, and provide a rallying cry for your fans.

Thousands of more team naming suggestions for a variety of groups are waiting for you at the Sports Feel Good Stories menu. Check ’em out.

Art Novak is an Emmy-winning writer, novelist, and Professor Emeritus at Savannah College of Art and Design.

Extra Points on How to name your team

You’re on How to Name Your Team — and Win the Name Game page.