You are here: Home / football / JJ Watt Quotes for Inspiration

These JJ Watt quotes will give you a taste of how the NFL star and humanitarian thinks about things.

When Houston Texans’ defensive end Justin James Watt was able to raise over $33 million in relief efforts for Hurricane Harvey, it fulfilled what his mother taught him as a child. Popularly known as JJ Watt, Justin once said, “My mom taught me from a young age to give back and volunteer any chance you get. It was something that I knew, if I made the NFL, I would financially have the ability to do.” The 3-time AP NFL Defensive Player of the Year Award winner has been an inspiration to millions of Americans and his latest efforts in helping Harvey victims have put him in a league of his own.

Here is a look at some of the inspiring and motivating JJ Watt quotes from the man who is also running the Justin J. Watt Foundation. The Foundation reaches out to children with the message, ‘Dream Big, Work Hard.’

Success isn’t owned. It’s leased and rent is due every day.

Heard someone say, ‘I can’t wait until I can finally say I’ve made it.’ The day you think you’ve ‘made it’ is the day you begin your decline.

Greatness is earned, not given.

Never be happy with just good. Every single day, you need to do something to make yourself better than everybody else. That’s the only way we’re going to improve.

I have a limited amount of time to build a career out of football and be the best that I can be at this job. When this job is over, I have the rest of my life to do what I want with my time.

Everybody has a job to do, and you just know that every day you have to do what it takes to get there.

I know that I have probably an eight- to 10-year window in this league, and if I want to be what I say I want to be, then I have to commit myself 100 percent.

No Dream Is Too Big If You Have The Right Attitude. Dream Big Work Hard.

Obviously, you get to do a lot of great things and cool opportunities at the Super Bowl. But at the end of the day, we all want to be here as a player. That’s the goal, and that’s why I work so dang hard.

If you don’t have that vision for the end goal, you have no clue where you’re going, and you’re going to work very hard to go nowhere.

I’m a kid who grew up working hard.

My dad was a firefighter for almost 30 years. My mom worked her way up from a secretary to vice president of her own company. They taught me to work hard for everything and take nothing for granted. That’s how I play.

I’m going to continue to work to be the best player in the world, and whenever that doesn’t sound fun to me anymore, that’s when it’s over.

When it comes down to that moment, when it’s me against you, you know in your head whether you worked hard enough. You can try to lie to yourself. You can try to tell yourself that you put in the time. But you know – and so do I. 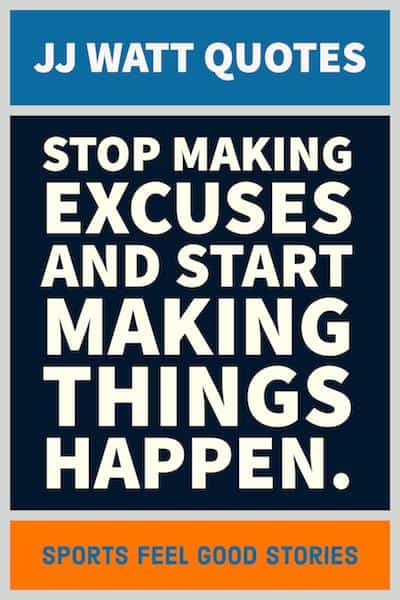 Right now, I am a football player and I will sacrifice whatever is necessary to be the best.

The way I look at it is that somebody in the world, no matter what your field is — teacher, violinist, football player — has to be the best. Why not me?

There’s gonna be people that don’t like you, regardless. But I take on the mentality of, ‘Look, I’m gonna do whatever I want to do. If people don’t like it, they don’t like it.’

I know that I’m going out there, and I know that I am going to get hit in the head. I know that’s part of football. That’s like a firefighter knowing he is going to go into a fire at some point. You know you are going to be put in danger’s way, and you accept that risk, and you do it.

I want to be the defensive player to break the MVP barrier. I want to break barriers – I want to do things when people tell me I can’t.

It may not matter to anybody now, but when you go out there and perform on the field, that’s what matters.

Of course, everybody has those days where you don’t feel like doing it. I’m just like anybody else in that respect. But there’s a difference between not feeling like doing it and not doing it period.

I never want to let a day go by without having done something to get a little better.

College Career at Wisconsin and Professional Career with Texans

Playing at the University of Wisconsin-Madison, Watt won the Scout Team Player of the Year in 2008. The next year he appeared in 13 games as a defensive end. At the end of his college football career, he had 104 tackles, 11.5 sacks and 36.5 tackles for loss.