You are here: Home / The Best Tom Brady Quotes and Sayings

Our Tom Brady quotes might remind you of his team leadership or his skilled passing.

Being one of only two players to win 5 super bowls makes Tom Brady a really special football quarterback. As if that feat was not great, Brady set the record of being the only quarterback who won 5 Super Bowls playing for the same team. However, that is only the beginning of what puts him in a league of his own.

He has 4 Super Bowl MVP awards (the most), has been into a dozen Pro Bowls, has 2 league MPV awards to his name, and has seen his team win more division titles as a quarterback than anyone else.

Tom Brady is easily in the list of the greatest athletes in the sport. He has been an inspiring figure to tens of millions. These quotes from this legend will not only help inspire you, but they can also provide you an insight into the stuff that makes him so great!

A lot of times I find that people who are blessed with the most talent don’t ever develop that attitude, and the ones who aren’t blessed in that way are the most competitive and have the biggest heart.

If I have something to say, I want it to be meaningful.

Man, wear your seat belts. That’s all I can tell everybody.

You never get over losses. I’ve never gotten over one loss I’ve had in my career. They always stick with me.

I think sometimes in life the biggest challenges end up being the best things that happen in your life.

Check out 37 Most Inspirational Sports Quotes of All-Time 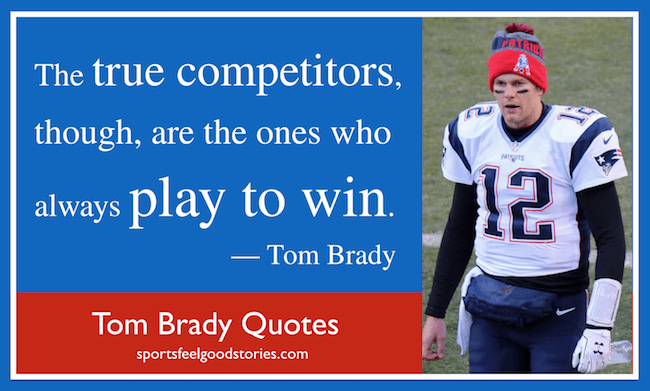 I think that at the start of a game, you’re always playing to win, and then maybe if you’re ahead late in the game, you start playing not to lose. The true competitors, though, are the ones who always play to win.

My job is to play quarterback, and I’m going to do that the best way I know how because I owe that to my teammates regardless of who is out there on the field with me.

Everybody has an opinion. I think everybody has the right to believe whatever they want. I don’t ever cast judgment on someone’s belief system.

Every man should know, if you’re comfortable and you like it, you should do it. Everyone always worries about what the girls think, what the guys think. If you like it, do it.

Things don’t correct themselves, you’ve got to go out there and work hard to correct them

I can’t do anything with what’s happened in the past. I have to just go forward with the most awareness I can going forward and trying to be the best I can be for our team.

You can’t go out and practice average on Wednesday, average on Thursday, okay on Friday and then expect to play well on Sunday.

My wife speaks five languages. I always tell her I speak two: English and football.

You wanna know which ring is my favorite? The next one.

Athletes are always talking about money at a time when everyone else is struggling so badly to make it. We all make way more than our fair share. And I just think it reflects poorly on myself and my teammates. I really do just want to win, and that has and will continue to be the reason that motivates me and is the biggest factor in my decision-making process.

To me, if you’re trying to impress a girl, get a date, they’re gonna like that more because you’re a confident guy. That’s what it comes down to.

I am not a person that’s self-satisfied just being out there. I want to go out there and play great.

See, there are a lot of guys who are all talk. They say they want to work harder and be the best, but they never pay the price.

I have a memory, and I can just eliminate mistakes when they come up because I’ve already made them.

When you lose, talk little. When you win, talk less.

I always try to do as much as I can do. I’m never a person that does not enough because I’d regret not doing enough and think I probably could have done more.

When I’m out on the football field, I have so much confidence in what I’m doing.

I would never do anything outside of the rules of play.

I play a complicated position in an intensely team-oriented game.

In Boston, they love their sports celebrities. And it’s great.

Check out these other New England Patriots Football Team Names.

Sometimes some of the toughest things you deal with end up being the best things because you realize the people that you can rely on, that love you and support you through it.

One thing I learned in college is that the coach decides who plays, and when he says to go in there, you play your butt off.

I don’t think there’s a lot of carry-over from year to year. I don’t think anybody cares what you did the year before.

Everyone is dealing with something. This is life; this is not just a piece of cake. You expect that when your teammates are doing their jobs, so you got to compartmentalize and do your job.

It’s never come easy for me. I don’t think my mind allows me to rest ever. I have, I think, a chip on my shoulder, and some deep scars that I don’t think were healed.

Nothing surprises me anymore in the NFL.

The only thing I really like doing during the week is getting ready to play the game.

There are times when you throw an interception and you’re beating yourself up.

I’m not a person who defends myself very often. I kind of let my actions speak for me.

To me, football is so much about mental toughness, it’s digging deep, it’s doing whatever you need to do to help a team win and that comes in a lot of shapes and forms.

The only thing I ever wanted to be was a professional football player.

If someone lies, well, you had a choice to trust that person or not. I think the way my father raised me, well, he trusted everybody. And that worked for him.

I’m much more comfortable and confident running out on the field in front of 70,000 people instead of standing in front of a camera trying to say some lines. The people who do that as a profession are very talented because it’s certainly not easy.

Is it going to make me feel any better to make an extra million? That million might be more important to the team.

A lot of people don’t believe in you. It’s obvious by now, six other quarterbacks taken and 198 other picks. And I always thought ‘you know what, once I get my shot, I’m gonna be ready. I’m gonna really take advantage of that.

I think the running game is very important to every offense. Being balanced is extremely important. There are times where you have to throw the ball.

You put all the other stuff aside and go out and do your job, and mine is to be the best I can be for my teammates.

I think I have a certain respect for people, you know. And I guess a lot of times I expect that respect to go both ways.

I’m an emotional person. Sometimes I can’t help it.

I’ve had just about everything punched. I’ve had things grabbed that just shouldn’t be grabbed.

Some of the best motivation in life is trying to impress a girl.

I think you can just go out and try to be the best you can be, deal with people with respect, with honesty, with integrity, have a high moral standard. I’ve always really tried to exemplify that as an athlete. I’ll continue to try to do that.

Life is not living in the suburbs with a white picket fence. That’s not life. Somehow our American culture has made it out that that’s what life needs to be – and that if it’s not that, it’s all screwed up. It’s not.

Andy is a sportswriter who lives in St. Paul.

Also, check these out:

Photo credit in the banner to Jeffrey Beall