You are here: Home / Football Puns and Captions

Are you looking for some funny football puns and captions? Maybe you’re posting on Instagram or Facebook and need an apt phrase to bring additional attention to your photo? We can help.

For years, football has ruled in the TV ratings, and the Super Bowl has become a worldwide phenomenon. Our obsession with the great gridiron runs deep, and, in the fall and winter, Friday night, Saturdays and Sundays are devoted to football — and for many, this has expanded to include Thursday and Monday night.

Everyone grunts and groans when they here puns, so they’re not unlike Dad Jokes in that respect. But a good pun can make you laugh. Football is a natural for puns and catchy captions that bring a smile to our faces. So, let’s kick this off with some of our favorites.

1.) The calm before the score.

2.) He who fumbles must be humble.

4.) Action speaks louder than your coach.

6.) Did you hear about the center that wore hiking shoes? Rim shot.

7.) Step away from that chicken; it’s a personal fowl!

8.) Did you hear about the fishing hook that was oversensitive? It was a defensive tackle.

11.) The receiver ran a buttonhook route too well; his pants fell. 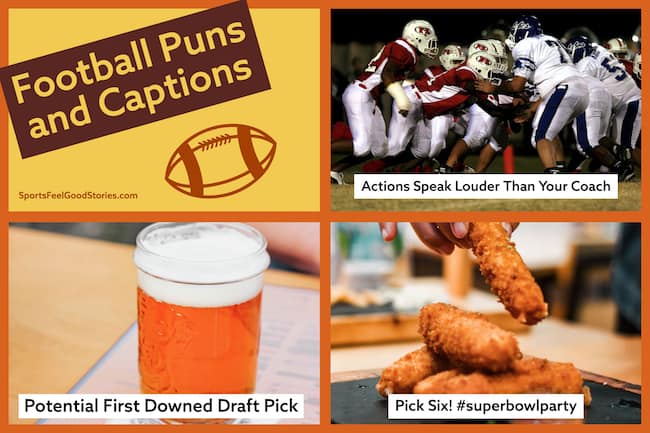 12.) How did the defense know the halfback was going to run the ball? He left the huddle crying.

13.) Did you hear about the fans attending the Super Bowl? They were having a ball!

14.) Did you hear about the chickens that were football fans? They egged their team on.

15.) Coach wants you to go into the game. He needs a substitute to take a knee.

16.) The refs couldn’t measure for a first down, someone was yanking the chain.

19.) Did you see the guy who took the girl’s chip? It was an illegal block.

20.) A football player wears a face mask on Halloween.

21.) Casper, the friendly ghost, got asked to join a football team because they needed a little team spirit.

22.) The football players all got together and danced at the Foot Ball.

24.) Did you hear about the broken chair at the tailgate? It folds under pressure.

25.) What do you call it when a football player suffers an injury in his last game before retirement? Gridirony.

26.) When do they call “past interference”? When you go back in time and change things, so your team wins.

28.) Why was the tight end reading a book on the twenty-yard line? It was a red zone read.

29.) The ghost of Christmas passes was how Scrooge won the game.

30.) I tried to give up football, but I couldn’t kick the habit.

31.) Why did the center walk off the field? The Quarterback told him to hike.

32.) Does a football player drink penal-tea?

33.) He led the tailgate in all-purpose garbage.

34.) Why did the quarterback scramble for his job? So, he wouldn’t get sacked.

35.) What do you call a woman hustling a guy at a tailgate party? Backward pass.

36.) Why was the quarterback such a good player? He was outworking the competition.

37.) Football is the only time you can knock somebody out and not go to jail for it.

38.) All the fans in the stands can chill the game.

40.) The fans were quiet, it was the calm before the score.

41.) A boxer is one kind of dog that doesn’t like to play football.

42.) What do you call a dozen chubby guys dancing together at half time? Backfield in motion.

43.) Why didn’t the skeleton play football? He was caught in the coffin corner.

46.) Why don’t they serve ice in drinks at my college stadium anymore? The student that had the recipe graduated.

48.) The Football Coach went to the bank to get his Quarterback.

49.) Local amateur poultry team had their star chicken banned, apparently, he was a professional fowl.

50.) The away team kicked a field goal, it was a goal new ball game.

51.) You could tell the hometown fans were out of it; they were getting blitzed all game.

52.) I’ve discovered a new kind of back in football, not a running back, defense back, or quarterback. It’s an I want my money back.

53.) Why do dumb fans not eat hot dogs at football games? They don’t know which end to start on.

54.) My team is so far behind; they really need to ketchup.

55.) Did you hear about the beauty queen who lost her crown? She had a couple of split ends.

56.) What do you get if you cross a telephone with a fat split end? A wide receiver.

57.) Did you hear about the guy who interrupted another guy hustling a girl? He got a rushing the passer penalty.

61.) Here’s your two-minute warning before I kiss you.

65.) This was an incomplete pass.
(Photo of chip and dip sitting on the floor).

66.) Coming in on a wing and a prayer.
(Photo of chicken wings on a platter).

68.) The ball carrier lost possession.
(Photo of appetizer spilled over from plate).

73.) New Jersey.
(Photo of a player in a clean jersey before the game – Great for the start of the season post).

74.) There’s a tiny difference between champs and chumps.
(Any action photo of football players). 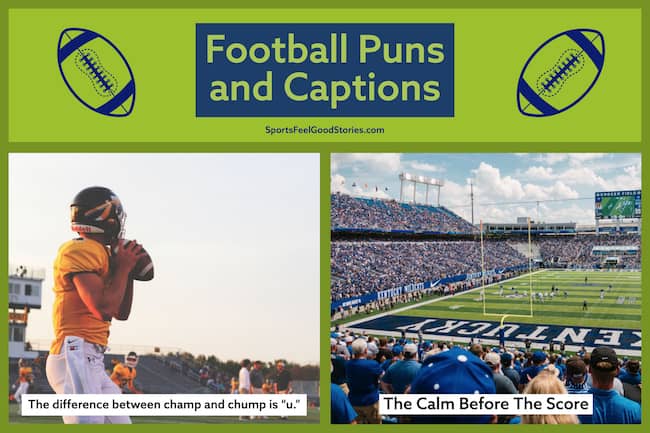 79.) Teamwork makes the dream work.
(Perfect for about any football photo with a few players or more.)

81.) Our bowl game is hot.
(Shot of tailgate spread with bowls of potato chips, nacho chips, and crackers).

83.) Chip Shot!
(Picture of some chips and dip in a football-shaped bowl).

85.) Intentional Frowning.
(Picture of a fan with a frown or grimace on his/her face).

86.) Tail-greating is a way of life.
(Photo of folks at a tailgate party).

87.) Winning is a habit; Success is a choice. Attitude is Everything.
(Picture of a team on sidelines).

88.) This is my first downed draft pick.
(Picture of beer in a glass).

92.) Beauty is only pigskin deep.
(Photo of fan with a painted face).

94.) I made a snap decision to watch football today.
(Picture of a football).

95.) We’re going to go the whole nine yards today.
(Picture of a tray of donuts).

97.) Sweet dreams are made of cheese.
(Picture of cheese tray).

98.) The not so rare foul-mouthed zebra.
(Picture of a football referee)

99.) Chop block.
(Picture of a pork chop at aa tailgate and someone has their hand over it).

110.) I Googled Packer competitors, and no results showed up.

111.) This is called man coverage.
(Guy bundled up outdoors in the winter at a football game).

114.) Horse collar tackle.
(Guy or girl grabbing another person to keep them from getting to the food).

115.) Catch you later.
(Guy or girl affectionately holding a football).

116.) Tackling dummy.
(Guy or girl looking a little out of control at a tailgate).

118.) Nose Tackle!
(Guy or girl grabbing a person’s nose like the Three Stooges).

Like these Football Puns and Captions? You should also check out our funny football jokes.

121.) Sweet dreams are made of cheese.
(Works exceptionally well if the Packers make the Super Bowl. Otherwise, just make your photo feature some cheesy dish.)

123.) You are the wind beneath my chicken wings.
(With apologies to Bette Midler.)

125.) Having a ball at my best friend’s Super Bowl party.
(Show photo with actual football.)

127.) A football game broke out during a JLo concert.
(Well, see, she’s the half-time entertainment, and it’s a play on the old, “A hockey game broke out… joke.)

128.) Just in queso didn’t know; I’m cheering for the Chiefs.
(Or, fill in your favorite squad. Great for any Super Bowl watching party photo.)

How to Use Football Puns and Captions

If you would like to get your friends and family pumped up for the big college or NFL football game of the week. A great way to do it is to send them a text message, e-mail, or message on social media. The funny puns we included here are the perfect way to convey your love of the game while getting some chuckles too.

Sharing your passion for football can give everyone a motivational boost and get them excited about the game. And it’s not just intelligent and witty saying you can share with your fan base; it’s pictures and jokes. We’ve suggested several photos that can be spontaneous or staged. Just have fun with it.

Sharing a picture and caption on Instagram, Facebook, or TikTok are great ways to get the word out and get some laughs. If you check your phone, you probably have a few candidates to use from past tailgate parties. And speaking of tailgate parties, food and beer always make for fun pictures.

As soon as football season begins, start thinking about ways to include friends and family as part of the pre and post-game action. Some of the captions we have included are inspiring. Featuring these in fun posts shows people you know that you support them and their goals. Are you ready for some football?

Tim Moodie is a writer, toy inventor, and Vikings fan. Mike used to write for USA Football, the youth arm of the NFL and is the editor of Sports Feel Good Stories.

Slogans for Your Football Team