You are here: Home / Football Jokes

Looking for some funny football jokes to tell your friends. We’ve got you covered like the stingiest man-to-man defense. Check out the list below.

Remember, delivery is a crucial element. Know the importance of a pregnant pause, and finish the punch line with confidence!

Q: What do you call 20 Vikings’ fans in the basement?
A: A Whine Cellar.

Q: What do the Atlanta Falcons and possums have in common?
A: Both play dead at home and get killed on the road!

Q: How do you keep the Detroit Lions out of your front yard?
A: Put up goal posts.

Q: What’s the difference between the Buffalo Bills and a dollar bill?
A: You can still get four quarters out of a dollar bill.

Q: What happened to the joke that Jay Cutler told his receivers?
A. It went over their heads. 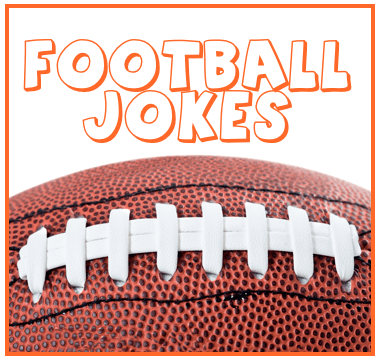 Q: Why do 49er fans smell so bad?
A: So blind people can hate them too.

Q: What do Nebraska and marijuana have in common?
A: They both get smoked in a bowl.

Q: What did the average Patriot player get on the Wonderlic test?
A: Drool.

Q: What do the St. Louis Rams and Billy Graham have in common?
A: They both can make 70,000 people stand up and yell, “Jesus Christ.”

Q: Why are so many Seattle Seahawks players claiming they have the Swine Flu?
A: So they don’t have to touch the pigskin!

Check out Football Puns and Captions.

Q: If you have a car containing a Cowboys running back, a Cowboys linebacker, and a Dallas Cowboys defensive back, who is driving the vehicle?
A: The cop.

Q: Why did the football go to the bank?
A: To get his QUARTERBACK.

Q: What’s the difference between a New England Patriots fan and a carp?
A: One is a bottom-feeding, scum sucker, and the other is a fish.

Q: What does a Minnesota Vikings fan do when his team has won the Super Bowl?
A: He turns off the PlayStation 3.

Q: Did you hear that the Detroit Lions football team doesn’t have a website?
A: They can’t string three “W’s” together.

Q: How many San Francisco 49ers fans does it take to change a light bulb?
A: None. Lava lamps don’t burn out, man!

Q: What do an Oakland Raiders fan and a bottle of beer have in common?
A: They’re both empty from the neck up.

Q: What do they call a drug ring in Baltimore?
A: A huddle

Q: Where do you go to Chicago in case of a tornado?
A: Soldier Field – they never get a touchdown there!

Q: Why doesn’t Toledo have a professional football team?
A: Because then, Cincinnati would want one.

Q: What do you call a genius sitting in the Texas A&M student section?
A: A Visitor.

Q: What is the difference between a Dallas Cowboys fan and a baby?
A: The baby will stop whining after awhile.

Q: How many Miami Dolphins does it take to change a tire?
A: One, unless it’s a blowout. In which case, the whole team shows up

Q: What do you call 53 millionaires around a TV watching the Super Bowl?
A: The Dallas Cowboys.

Q: Why do ducks fly over Ford Field upside down?
A: There’s nothing worth crapping on!

Q: Why didn’t your neighbor’s dog want to play football?
A: It was a boxer.

Q: What did the wide receiver say to the football?
A: Catch you later.

Q: What do you get when you cross two football teams with the Invisible Man?
A: A game of football like you’ve never seen.

Q: Where do football players shop for a new uniform?
A: New Jersey.

Q: What did the football coach say to the broken vending machine?
A: Please give me my quarterback!

Q: Why did the young boy ask his parents to take him to the Cowboys’ AT&T Stadium during the tornado warning?
A: He said, “There’s never a touchdown there.”

Q: What do you call an offensive tackle’s son?
A chip off the old blocker.

Q: Where do old quarterbacks go when they retire?
A: Out to pass-ture.

Q: Which NFL team has the coolest helmets?
The one with the most fans!

Did you hear about the Buffalo Bills kicker who tried to throw himself on the floor in a fit of rage?  He missed.

All of the Seven Dwarfs were marching through the forest one day they fell in a deep, dark ravine. Snow White, who was following behind, peered over the edge of the steep gorge and called out to her fallen comrades. From the depths of the dark hole, a voice returned, “The Detroit Lions are Super Bowl contenders.” Snow White thought to herself, “Thank God! At least Dopey has survived!”

The bartender asks the man what the dog would do if they score a touchdown, and the man replies “I don’t know, I’ve only had him for three years.”

A.) Remember, you can adapt these jokes to your favorite team’s chief opponent. If you’re a Packers’ fan, make the butt of the joke the Chicago Bears or the Minnesota Vikings.

B.) Make sure you have the right audience for your joke-telling. If you have several non-sports fans in the mix, the joke might be destined to fail. Know your audience.

C.) Get the words right. The set-up and the finish must be spot-on.

D.) Have a back-up plan. If one of your jokes flops, come back with a tried-and-tested winner.

E.) Confidence is king. If you don’t think it’s funny or you’re questioning yourself, your audience will sense it. Be sure of yourself. Go in with great material.

Mike is a former contributing writer to USA Football, the youth arm of the NFL, a former football coach, and the editor of Sports Feel Good Stories.

You’re on the Football Jokes page.

Slogans and Sayings for Football