You are here: Home / baseball / Living the Dream: The Wrigley Rooftop Experience

The Cubs’ sad post-season record hasn’t stopped the fans from coming to this cherished national treasure. Nestled in the Wrigleyville district in the Lakeview community of the great city of Chicago, “The Friendly Confines” are living history.

It’s where Babe Ruth called his shot, where “Mr. Cub” Ernie Banks played two, where Jack Brickhouse asked Arne for hat shots, and where the Cub fans’ lament of “wait till next year” was born.

“…in 2007 members of the American Institute of Architects put Wrigley at No. 31 among its top 150 buildings of “America’s Favorite Architecture” — ahead of such iconic buildings as Carnegie Hall and the National Gallery of Art. No other sports venue still standing was listed among the top 100. Wrigley was the highest-ranked building in Chicago, no small honor in a city that has done for architecture what Salzburg has done for music.”

Making a Wrigley pilgrimage should be high on the list of every true sports fan. Walking down Addison to see the stadium, first-time visitors in our group were struck by its compact size. In a city where skyscrapers abound, Wrigley Field is relatively short of stature. This low height creates views of the game from neighboring buildings.

Apartment buildings on Sheffield and Waveland, most of which predate the building of Wrigley Field, sport flat rooftops that have great sightlines to action on the field. Building owners of 15 facilities worked out an agreement with Cubs management – which is now being negotiated further – which pays the Cubs team a percentage of revenues. Although not included in official attendance numbers, rooftop spectators enjoy the game and experience it in a unique fashion.

One of these buildings, 3639 Wrigley, was our destination. It all started when Uncle Leo visited 3639 Wrigley for a game last summer. Leo told us it was a one-of-a-kind experience, all you can eat and drink, friendly service, and it feels like you’re right in the stadium.

A Washington National vs. Cubs game in late June was our target and plans were made. With so much to do in Chicago – from the architectural boat tour of the Chicago River (a must!) to visiting Cloud Gate, a.k.a. “The Bean” – our dance card for the long weekend was quickly filled.

Shuffling through the fun pre-game atmosphere of Wrigleyville, we arrived at 3639 Wrigley an hour before the 6:15 opening pitch. We entered the 7-floor building (counting the rooftop) from a side entrance and took an elevator up to the 3rd floor clubroom. The lower 2 floors in the facility still function as apartments.

A quick walk-through revealed that the 3rd floor served food (some of our favorites included great pizza, fresh-cut fruit, and a Greek salad), featured a bar and had ice cream selections to choose from including Haagen-Dazs and Drumsticks. The 4th floor featured a covered terrace with stadium bleacher seating and a bar. The covered terrace provided shelter later when we experienced a short rain delay in the 4th inning. All of the bars in the facility featured premium beers and wines.

The 5th floor had restrooms, as did the 3rd and 4th floors. The 6th floor showcased the grill where hot dogs, hamburgers, brats, veggie burgers, and veggie dogs were available with an assortment of chips. You’re not going to go hungry at 3639 Wrigley. In addition to easy access to a wide variety of options on multiple floors, servers bring the food right to you. BBQ pulled pork sandwiches and chocolate chip cookies fresh from the oven were just a couple of the times brought to us by friendly servers as we enjoyed the game action.

The 7th-floor rooftop had unassigned stadium seating, a sun deck if you preferred to stand and provided a similar view to the game as if you were in the right field. Sheffield Street, which separates 3639 Wrigley from the stadium, could not be seen from the top, so it felt as if the top floor was just an extension of Wrigley Field.

The whole facility had a luxury-box feel, but with so much more charm.  The renovated brick building with its cool design and layout has everything a sports fan could want.  It featured lots of great food and drink, clean bathrooms without lines, big-screen TVs everywhere, various seating arrangements inside and out, and helpful service.

The host and operator of the 3639 Wrigley facilities is Steve Alexander. Born in Greece, Alexander moved to Chicago when he was 6 years old. He’s been running 3639 Wrigley for the past 9 years. Alexander knows that it’s the service and experience that keeps people coming back to the facility – and many do year after year. He thinks of the small things like having sunscreen for Summer’s sunny days and having heaters near seating areas for when the wind comes off Lake Michigan in the Spring.

“Our typical customer on weekends tends to be celebrating events like birthday parties, bachelor/bachelorette parties or anniversaries. During the week, our customers tend to be more corporate – folks entertaining customers or company parties,” said Alexander. “We had a group of doctors this morning who kicked things off at 7 a.m. We served breakfast and they were able to use our big-screen TVs in our clubroom for their presentations.  They watched the opening game of the doubleheader.”

Despite it being the 11th game of a long home stretch, and the second game of a doubleheader, our group found Steve and his team to be playing at the top of their game. Fast and friendly service was delivered in a clean environment.

“We have a customer who has been coming with his employees to games for the past 5 years that paid us the biggest compliment,” said Alexander, “He said, ‘You treat us like we treat our customers.’ And, that made us feel good.”

To make 3639 Wrigley the sports showcase that it is, the owners invested some $4 million dollars into renovations. In the bar, you can see photos of the before and after pictures that transformed the facility from its old apartment setting to its charming sports bar look. 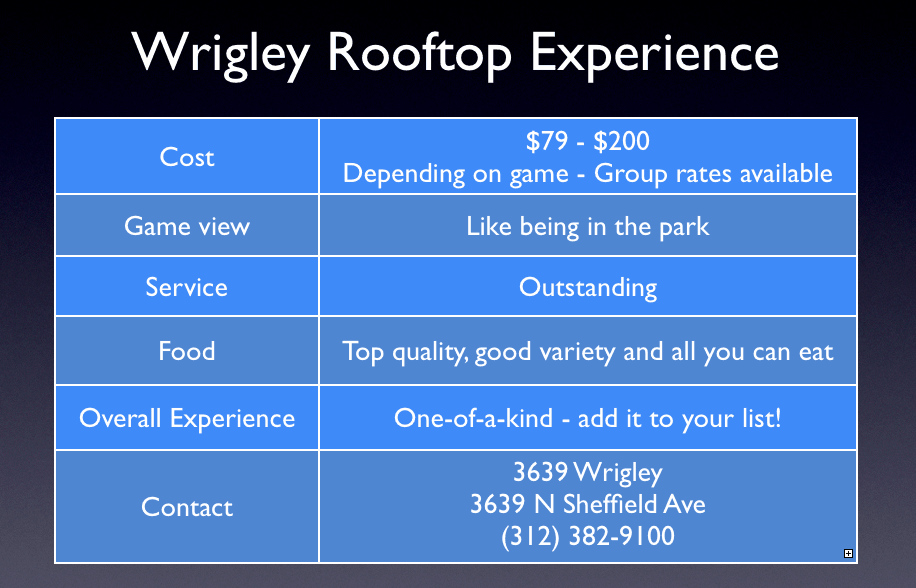 A one-of-a-kind ballpark and a one-of-a-kind fan experience added up to a great day for our group of six. It was simple and easy to change your view of the game, get the food and drinks of your choice, enjoy the sunshine or the comforts of being inside when it rained, and just have a great time conversing while watching baseball.

Uncle Leo was right; we had a blast. The Wrigley Rooftop Experience is not to be missed. As more often is the case than not, the Cubs lost the game – in fact, they lost both games that day. But, we left with smiles on our faces, satisfied appetites and memories of an unforgettable experience.

Mike is the founder and editor of Sports Feel Good Stories, and a Cub’s fan.