Our collection overcoming fear quotes will help you meet the challenges in your life.

People fear different things for different reasons, and it has a place in everyone’s lives. The only way to conquer fear is to face it head-on. Great men and women stand testimony to this – they have left behind legacies and words of wisdom as to what they feared the most and how conquering them led to their successes.

Once you conquer fear for something, you become stronger and every new fear becomes a challenge that awaits conquering. If you are looking for inspiration, these quotations by the famous and successful will provide you enough reasons to take on your fears.

Our deepest fear is not that we are inadequate – Our deepest fear is that we are powerful beyond measure. It is our light, not our darkness that most frightens us. We ask ourselves, Who am I to be brilliant, gorgeous, talented, fabulous? Actually, who are you not to be? You are a child of God. Your playing small does not serve the world. There is nothing enlightened about shrinking so that other people won’t feel insecure around you. We are all meant to shine, as children do. We were born to make manifest the glory of God that is within us. It’s not just in some of us; it’s in everyone. And as we let our own light shine, we unconsciously give other people permission to do the same. As we are liberated from our own fear, our presence automatically liberates others.
Marianne Williamson

2. Don’t let the Fear of Striking Out

Never let the fear of striking out, keep you from playing the game.
Babe Ruth


3. Fear is the Mind Killer

Fear is the path to the dark side. Fear leads to anger. Anger leads to hate. Hate leads to suffering.
Yoda

5. The Only Thing to Fear is Fear Itself Quotation

The only thing we have to fear is fear itself.
Franklin D. Roosevelt

Curiosity will conquer fear even more than bravery will.
James Stephens

The only thing we have to fear is fear itself–nameless, unreasoning, unjustified terror which paralyzes needed efforts to convert retreat into advance.
Franklin Delano Roosevelt

I must not fear. Fear is the mind-killer. Fear is the little-death that brings total obliteration. I will face my fear. I will permit it to pass over me and through me. And when it has gone past I will turn the inner eye to see its path. Where the fear has gone there will be nothing. Only I will remain.
Frank Herbert

You can discover what your enemy fears most by observing the means he uses to frighten you.
Eric Hoffer

Don’t be afraid of your fears. They’re not there to scare you. They’re there to let you know that something is worth it.
C. JoyBell C.

Let me not pray to be sheltered from dangers, but to be fearless in facing them. Let me not beg for the stilling of my pain, but for the heart to conquer it.
Tagore 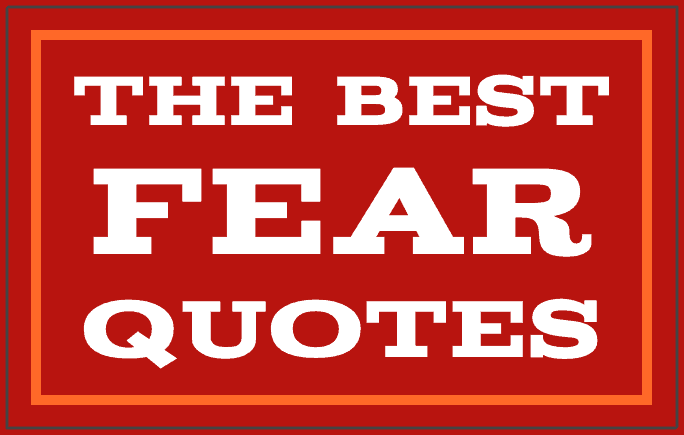 There is only one thing that makes a dream impossible to achieve: the fear of failure.
Paulo Coelho

You gain strength, courage, and confidence by every experience in which you really stop to look fear in the face. You must do the thing which you think you cannot do.
Eleanor Roosevelt

Fear not, but trust in Providence
Wherever thou may’st be.
Thomas Haynes Bayly

If we let things terrify us, life will not be worth living.
Seneca

Fear keeps us focused on the past or worried about the future. If we can acknowledge our fear, we can realize that right now we are okay. Right now, today, we are still alive, and our bodies are working marvelously. Our eyes can still see the beautiful sky. Our ears can still hear the voices of our loved ones.
Thich Nhat Hanh

No passion so effectually robs the mind of all its powers of acting and reasoning as fear.
Edmund Burke

Only when we are no longer afraid do we begin to live.
Dorothy Thompson

Fears are educated into us, and can if we wish, be educated out.
Karl Augustus Menninger

Inaction breeds doubt and fear. Action breeds confidence and courage. If you want to conquer fear, do not sit home and think about it. Go out and get busy.
Dale Carnegie

Be fearless. Have the courage to take risks. Go where there are no guarantees. Get out of your comfort zone even if it means being uncomfortable. The road less traveled is sometimes fraught with barricades, bumps, and uncharted terrain. But it is on that road where your character is truly tested. Have the courage to accept that you’re not perfect, nothing is and no one is — and that’s OK.
Katie Couric

If there is one thing which I would banish from the earth it is fear.
Henry Ford

In a closed society where everybody’s guilty, the only crime is getting caught. In a world of thieves, the only final sin is stupidity.
Hunter S. Thompson

Every now and then when your life gets complicated and the weasels start closing in, the only cure is to load up on heinous chemicals and then drive like a bastard from Hollywood to Las Vegas — with the music at top volume and at least a pint of ether.
Hunter S. Thompson

No sympathy for the devil; keep that in mind. Buy the ticket, take the ride…and if it occasionally gets a little heavier than what you had in mind, well…maybe chalk it off to forced conscious expansion: Tune in, freak out, get beaten.
Hunter S. Thompson

Jesus, bad waves of paranoia, madness, fear, and loathing – intolerable vibrations in this place. Get out. The weasels were closing in. I could smell the ugly brutes. Flee.
Raoul Duke

We had two bags of grass, seventy-five pellets of mescaline, five sheets of high powered blotter acid, a salt shaker half-full of cocaine, and a whole galaxy of multi-colored uppers, downers, screamers, laughers… and also a quart of tequila, a quart of rum, a case of Budweiser, a pint of raw ether and two dozen amyls.
Not that we needed all that for the trip, but once you get locked into a serious drug collection, the tendency is to push it as far as you can.
Hunter S. Thompson

Maybe it meant something. Maybe not, in the long run, but no explanation, no mix of words or music or memories can touch that sense of knowing that you were there and alive in that corner of time and the world. Whatever it meant.
Hunter S. Thompson

Fear doesn’t shut you down; it wakes you up
Veronica Roth

Fear is the enemy of logic.
Frank Sinatra

The only thing we have to fear is fear itself.
Franklin D. Roosevelt

The cave you fear to enter holds the treasure you seek.
Joseph Campbell

He who has overcome his fears will truly be free.
Aristotle

Power is of two kinds. One is obtained by the fear of punishment and the other by acts of love. Power based on love is a thousand times more effective and permanent then the one derived from fear of punishment.
Mahatma Gandhi

Nothing in life is to be feared, it is only to be understood. Now is the time to understand more, so that we may fear less.
Marie Curie

The brave man is not he who does not feel afraid, but he who conquers that fear.
Nelson Mandela

The fear of death follows from the fear of life. A man who lives fully is prepared to die at any time.
Mark Twain

The pleasures of love are always in proportion to our fears.
Stendhal

Keep your fears to yourself but share your courage with others.
Robert Louis Stevenson

Without fear, there cannot be courage.
Christopher Paolini

Do the thing you fear and the death of fear is certain.
Ralph Waldo Emerson

He who is not everyday conquering some fear has not learned the secret of life.
Shannon L. Alder

There is no living thing that is not afraid when it faces danger. The true courage is in facing danger when you are afraid.
L. Frank Baum

I fear no man. Sometimes I think I do not even fear God.
Zitkala-Sa

People living deeply have no fear of death.
Anais Nin

I have no fear of death. More important, I don’t fear life.
Steven Seagal

Expose yourself to your deepest fear; after that, fear has no power, and the fear of freedom shrinks and vanishes. You are free.
Jim Morrison

The whole secret of existence is to have no fear.
Gautama Buddha

There was never any fear for me, no fear of failure. If I miss a shot, so what?
Michael Jordan

The thing you fear most has no power. Your fear of it is what has the power. Facing the truth really will set you free.
Oprah Winfrey

l have no fear of change as such and, on the other hand, no liking for it merely for its own sake.
Robert Moses

Be a hero. Always say, ‘I have no fear.’ Tell this to everyone – ‘Have no fear.’
Swami Vivekananda

He who fears God fears no man.
Leonard Ravenhill

I don’t have no fear of death. My only fear is coming back reincarnated.
Tupac Shakur

If you have no fear, no one has power over you.
John Maeda

If you have other suggestions for overcoming fear quotes, please let us know via the contact page. Thanks.