These famous inspirational quotes will get your mind thinking. Are you spending your time wisely? Do you need a new outlook on life? Could a different perspective help you?

Check out this collection of famous inspirational quotes and be on your path to a new you (or at least be inspired to go on a walk or something).

10 Famous Inspirational Quotes to Kick off the Day

Choose a job you love, and you will never have to work a day in your life.
Confucius

Nothing could be worse than the fear that one had given up too soon and left one unexpended effort that might have saved the world.
Jane Addams

Nothing is so strong as gentleness, and nothing is so gentle as true strength.
St. Francis De Sales

The test we must set for ourselves is not to march alone but to march in such a way that others will wish to join us.
Hubert Humphrey

The time is always right to do what is right.
Martin Luther King

Defeat is not defeat unless accepted as a reality in your own mind.
Bruce Lee

The heights by great men reached and kept were not obtained by sudden flight. But they, while their companions slept, were toiling upward in the night.
Thomas S. Monson

When you get to the end of your rope, tie a knot and hang on.
Franklin D. Roosevelt

It wasn’t raining when Noah built the ark.
Howard Ruff

Wheresoever you go, go with all your heart.
Confucius

Life is a succession of lessons which must be lived to be understood.
Helen Keller

Yesterday is history. Tomorrow is a mystery. Today is a gift. That’s why we call it “The Present.”
Eleanor Roosevelt

We know what we are but know not what we may be.
Shakespeare

Not only must we be good, but we must also be good for something.
Henry David Thoreau

What one can be one must be.
Unknown

The toughest part of getting to the top of the ladder is getting through the crowd at the bottom.
Unknown

Nearly all men can stand adversity, but if you want to test a man’s character, give him power.
Unknown

Every accomplishment starts with the decision to try.
Unknown 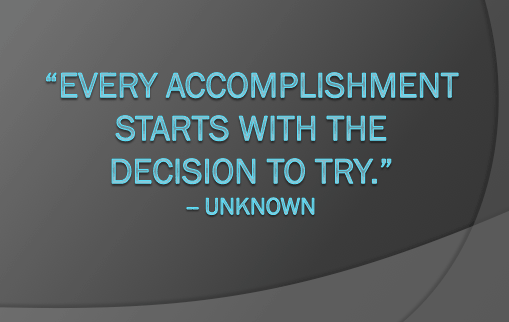 Don’t cry because it’s over, smile because it happened.

Why fit in when you were born to stand out?

A person’s a person, no matter how small.

Sometimes the questions are complicated and the answers are simple.

Be who you are and say what you feel, because those who mind don’t matter and those who matter don’t mind.

He that would be a leader must be a bridge.
Welsh Proverb

The best leaders of all, the people know not they exist. They turn to each other and say, “We did it ourselves. “
Lao Tzu

Each time someone stands up for an ideal, or acts to improve the lot of others, or strikes out against injustice, he sends forth a tiny ripple of hope.
Robert F. Kennedy

Every time we open our mouths, men look into our minds.
Unknown

Tell me and I forget; show me and I remember; involve me and I understand.
Unknown

Nobody made a greater mistake than he who did nothing because he could do only a little.
Edmund Burke

The world is more malleable than you think and it’s waiting for you to hammer it into shape.
Bono

If the world seems cold to you, kindle fires to warm it.
Lucy Larcom

Science may have found a cure for most evils; but it has found no remedy for the worst of them all – the apathy of human beings.
Helen Keller

Bite off more than you can chew, then chew it.
Ella Williams

To live for results would be to sentence myself to continuous frustration. My only sure reward is in my actions and not from them.
Hugh Prather

You gain strength, courage, and confidence by every experience in which you really stop to look fear in the face. You must do the thing which you think you cannot do.
Eleanor Roosevelt

With courage, you will dare to take risks, have the strength to be compassionate, and the wisdom to be humble. Courage is the foundation of integrity.
Keshavan Nair

Courage is not the absence of fear, but rather the judgment that something else is more important than fear.
Ambrose Redmoon

Your current safe boundaries were once unknown frontiers.
Unknown

One isn’t necessarily born with courage, but one is born with potential. Without courage, we cannot practice any other virtue with consistency. We can’t be kind, true, merciful, generous, or honest.
Maya Angelou

To go against the dominant thinking of your friends, of most of the people you see every day, is perhaps the most difficult act of heroism you can perform.
Theodore H. White

Twenty years from now you will be more disappointed by the things you didn’t do than by the ones you did do. So throw off the bowlines. Sail away from the safe harbor. Catch the trade winds in your sails. Explore. Dream. Discover.
Mark Twain

Unless a man undertakes more than he possibly can do, he will never do all that he can.
Henry Drummond

If you want a guarantee, buy a toaster.
Unknown

Excerpt from Bono’s Commencement Address at University of Pennsylvania

There’s a truly great Irish poet his name is Brendan Kennelly, and he has this epic poem called the Book of Judas, and there’s a line in that poem that never leaves my mind, it says: “If you want to serve the age, betray it.” What does that mean to betray the age?

Well to me betraying the age means exposing its conceits, it’s foibles; it’s phony moral certitudes. It means telling the secrets of the age and facing harsher truths.

Every age has its massive moral blind spots. We might not see them, but our children will. Slavery was one of them and the people who best served that age were the ones who called it as it was–which was ungodly and inhuman. Ben Franklin called it what it was when he became president of the Pennsylvania Abolition Society.

Segregation – There was another one. America sees this now but it took a civil rights movement to betray their age. And 50 years ago the U.S. Supreme Court betrayed the age of May 17, 1954, Brown vs. Board of Education came down and put the lie to the idea that separate can ever really be equal. Amen to that.

To win without risk is to triumph without glory.
Pierre Corneille

To live is so startling it leaves little time for anything else.z
Emily Dickinson

A coward is incapable of exhibiting love; it is the prerogative of the brave.
Gandhi

One hundred percent of the shots you don’t take don’t go in.
Wayne Gretzky

Never discourage anyone who continually makes progress, no matter how slow.
Plato

I arise in the morning torn between a desire to improve the world and a desire to enjoy the world.
E.B. White

Learn more about the guy who gave us The Elements of Style: E.B. White

True progress quietly and persistently moves along without notice.
St. Francis of Assisi

Learn from yesterday, live for today, hope for tomorrow.
Unknown

In teaching others we teach ourselves.
Unknown

A friend walks in when everyone else walks out.
Unknown