Miami Hurricanes football is a big deal in the sunshine state. The University of Miami (or The “U” as fans call it) has been a part of the national sports conversation since the early 1980s.

Largely characterized by swagger and defiance, UM reshaped the college football landscape throughout the 80s and 90s and remains one of the most decorated programs in NCAA history. The Hurricanes have won nine conference titles and five National Championships (fans will say six, citing a bogus pass-interference call in 2002).

Over the years, UM has been seen as something of a football factory for the NFL. The program holds a number of NFL Draft records, and once had an incredible streak of 149 consecutive regular-season weeks where a former Cane scored a touchdown.

It hasn’t all been successes however, as the football program has been associated with its fair share of scandal and controversy. The mid-00s through earlier this decade marked a lean period for the program. But with the arrival of Mark Richt, the Canes are once again championship contenders.

The Hurricanes enter 2018 with national title aspirations. ESPN and SBNation both rank Miami as the No. 8 team overall heading into the season, and almost all projections have the Canes playing for the ACC Championship against Clemson. Should the team make it the ACC Championship, they’ll also probably be playing in a New-Years-Six Bowl game for the second year in a row. 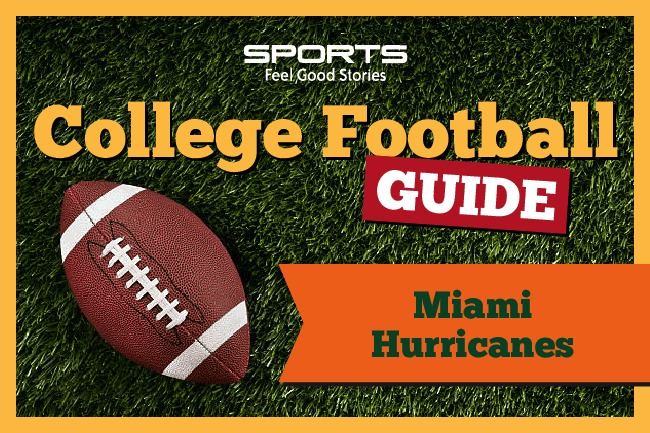 
The iconic “smoke” entrance for the Canes started in the 1950s at the old Orange Bowl stadium. As the story goes, UM transportation director Bob Nalette thought it all up in an effort to increase fan interest. It’s said the pipe which Nalette originally used is still the one in use, billowing smoke from the top of the Canes’ entrance tunnel.


One of the University’s on-campus fraternities, Sigma Chi, fires off a cannon blast after every touchdown scored by the Canes. The original cannon was nicknamed “Li’l Joe”, but the present cannon is “Touchdown Tommy.”


A new addition to the traditions list, the Turnover Chain was the brainchild of UM defensive coordinator Manny Diaz. The Cuban link gold chain is meant to incentivize turnovers and gripped the college football consciousness throughout 2017.

The One Canes Cheer You need to Know

No matter where the game is being played, Hard Rock Stadium, on the road, or even once upon a time at the Orange Bowl in downtown Miami, the one cheer you’ll always hear from Canes fans is: “It’s great to be a Miami Hurricane.” There’s a sing-song quality to the cheer, and it’s loudest particularly after home victories.


This blood feud dates back to 1951 when the two schools met for the first time (UM won 35-13). It’s been a fixture on the college football landscape every year since 1966. Notable NFL Hall of Famers have participated in this heated rivalry, and since the early 80s, one or both of the programs have been highly ranked entering this game, giving the contest national title implications. Some of the most memorable moments include Wide Right I, Wide Right II, and last year’s improbably “Rally in Tally.” Miami leads the all-time series 32-30.


Another intrastate rivalry for Miami, Canes, and Gators used to play for the War Canoe Trophy, but this matchup hasn’t been regularly scheduled since 1987. Although the schools have only faced off intermittently since then, the rivalry remains fierce. The Canes led the all-time series 29-26, and are 12-4 in the rivalry since 1978. The two schools will match up again in 2019 at a neutral site in Orlando, FL.


Although not a regular series at any point, this rivalry is one of the most famous in college football history. Dubbed the “Catholics vs Convicts” in the late 80s, Miami-Notre Dame games all featured major national title implications. The Hurricanes embarrassed the Fighting Irish in 1985, but Notre Dame found its revenge in 1988.

After not playing for more than two decades, the schools have played a few times in recent years and have regularly scheduled matchups in the coming decades. Notre Dame leads the all-time series 18-8-1, but Miami holds the last win in the series, a 41-8 drubbing of the third-ranked Fighting Irish last season.

Is Rosier still the QB at Quarterback-U?


Malik Rosier is coming off a 10-win season, but his inconsistency was maddening. Enter redshirt freshmen N’Kosi Perry and Cade Weldon, as well as true freshmen Jarren Williams. All three young men will vie to unseat Rosier at the quarterback position, and head coach Mark Richt won’t hesitate to pull his fifth-year senior as he demonstrated last season. With the offensive weapons at his disposal, Rosier will need to be accurate and steady under center in order to keep his job.


The Canes lost talented senior tight end, Chris Herndon, to the NFL draft. However, there hasn’t been much worry radiating from Coral Gables because of the true freshmen brought in to replace him at tight end. Brevin Jordan and Will Mallory were both highly touted recruits. They will look to make a name for themselves at a position that has seen some transcendent talent make it to the NFL. Also, true freshman running back Lorenzo Lingard could have a significant impact on the offense.


Canes defensive coordinator and Miami-native Manny Diaz caught lightning in a bottle with his Turnover Chain idea last season. But, the defense let the team down during the season-ending 3-game losing streak. This year’s defense features a number of NFL-caliber players along the defensive line, including end Joe Jackson and Jon Garvin. Linebackers Shaq Quarterman, Mike Pickney, and Zach McCloud are all returning, and the secondary will feature senior leadership with safety Jaquan Johnson and cornerback Michael Jackson.

Miami Names from the Past You Should Know

The Miami Hurricanes are one of the most prolific programs in terms of producing NFL talent. Literally hundreds of players from UM have gone on to compete in the NFL, and 56 different former Hurricanes have made at least one Pro Bowl, including at least one every year since 1985. There are seven former Hurricanes in the Pro Football Hall of Fame (and more to come), as well as nine former Canes in the College Football Hall of Fame.


Although not the coach that started it all (a distinction saved for Howard Schnellenberger), Jimmy Johnson thrust the program into the national consciousness. He was only there a short time (1984-1988), but the Canes competed for the national title in four of those five years, winning their school’s second title in 1987. Jimmy left for the Dallas Cowboys in 1988 with a 52-9 overall record, including 44-4 in his final four seasons.


One of the most flamboyant Canes, Michael Irvin holds several receiving records at UM. He also starred in one of the most memorable plays in program history with his 73-yard touchdown against Florida State in 1987. Irvin went on to play for and win Super Bowls with Jimmy Johnson and the Dallas Cowboys.


Part of the notable lineage of interior defensive linemen that includes Cortez Kennedy and Russell Maryland, no one was more dominant than Sapp in the early 90s.


Arguably one of the greatest linebackers of all-time, Lewis dominated college football in the mid-90s. He follows an incredible lineage that includes Jesse Armstead, Michael Barrow, Jim Otto, and Ted Hendricks. Lewis went on to be NFL Defensive Player of the Year and Super Bowl Champion. Lewis’s play at UM furthered the lineage that would later include Jon Beason, Jonathan Vilma, and Dan Morgan.

A few other names:

Mark Richt is entering his third season as head coach of his alma mater. Richt graduated from UM in 1982 and played quarterback behind Jim Kelly, Vinny Testaverde, and Bernie Kosar. Richt has led a resurgence that harkens back to the glory days of the program. He’s 19-7 as Canes coach.

David is a freelance sports writer based in Miami, FL, who has spent the last 15 years as an English teacher. He holds a Master’s Degree in English and Creative Writing and has coached high school basketball for 10 years. Follow him on Twitter: @ByDLFernandez.