Winners of three national titles and 18 conference championships, the ‘Noles have the tenth-highest winning percentage in the sport and have over 500 program wins. 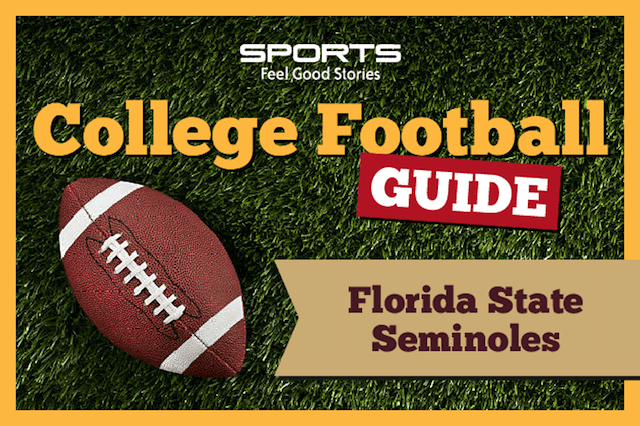 
One of the most recognizable traditions in all of college athletics, the flaming spear is thrown by Chief Osceola is the signature tradition at FSU. Osceola rides atop Renegade, an Appaloosa horse, and plants the flaming spear at midfield prior to kickoff at Doak Campbell Stadium. This tradition dates back to 1978, and in 2011, ESPN’s SportsNation voted the flaming spear as the best NCAA Football tradition in the country.


One of the more unique traditions in all of college football, FSU’s Sod Cemetery features the remains of opponents dating all the way back to 1962. As the story goes, Dean Coyle Moore—a long-time professor and member of FSU’s athletic board—issued a challenge: “Bring back some sod from between the hedges at Georgia.” After an upset victory over the favored Bulldogs, team captain Gene McDowell did just that, and Moore was presented with the sod at the next practice. The sod was buried on the practice field to symbolize the win, and a new tradition was born.

It’s up to the team captains nowadays to retrieve the sod after upset road victories, any win against the University of Florida, and all ACC Championship or Bowl Game wins. The Sod Cemetery is located just outside the practice field and memorializes over 100 FSU wins.

The One ‘Noles Cheer You need to Know

If you’re at a game at Doak Campbell Stadium, or even at a road venue where the FSU faithful are well represented, there’s no doubt you’ve experienced the War Chant. This tomahawk chop cry echoes throughout the stadium and is usually accompanied by the marching band’s signature tune.

This cheer dates back to a 1984 contest versus Auburn and has since evolved into one of the most recognizable gestures in all sports. The War Chant was adopted by MLB’s Atlanta Braves franchise in the 1990s when they acquired former FSU great Deion Sanders. The NFL’s Kansas City Chiefs have also adopted the cheer in the past.


The FSU-Florida rivalry, also known as the Sunshine Showdown, is among the headline rivalries in all of college football. Dating back to 1958, these matchups, particularly since 1990, have helped sharpen the college football national championship picture. For an 11-year stretch (1990-2000), both FSU and Florida were ranked in the top-10 heading into the matchup and six times during that span did the winner go on to play for the national title. Florida leads the all-time series 34-26-2, but FSU has won seven of the eight matchups since 2010.


This is one of the most heated and signature rivalries in all of college athletics. The FSU-Miami matchup has featured national championship implications in almost every game since the early 1980s. And some of the most recognizable moments in both programs’ histories have occurred during these contests, including the Wide Right moments. Miami leads the overall series 32-30, but again, FSU has dominated the matchup since 2010, winning seven of eight.


This rivalry pits the two winningest programs in ACC Conference history and has been on-going since 1992. Clemson has won the ACC title 17 times, while FSU has won 15 times. In the late 1990s through the early 2000s, this matchup featured some extra heat and became known as the “Bowden Bowl” since it saw father and son square off against one another, since Bobby Bowden’s son, Tommy, was the head coach at Clemson. FSU leads the all-time series 20-11, including an 11-year winning stretch from 1992 to 2002. These days, the FSU-Clemson matchup usually represents a spot in the ACC title game and carries national championship implications.


In Jimbo Fisher’s last season at FSU, the team slipped into surprising disarray. With Fisher’s departure to Texas A&M and Taggart’s arrival from Oregon, the ‘Noles faithful are hopeful some discipline can be restored to the storied program. Taggart’s workman-like and up-tempo approach will immediately test the depth of the roster. FSU should improve from its 4-7 2017 mark, but it will take some doing to challenge Clemson atop the ACC.


Junior quarterback Deondre Francois, who missed most of 2017 due to a knee injury, is the odds-on favorite to win the job, but it remains to be seen how he’ll return from his injury. Sophomore James Blackman started the final 12 games of the 2017 season, but he’s nowhere near as athletic or accurate. These questions likely mean FSU will lean heavily on the significant depth of its running back corps. This group features stud sophomore Cam Akers and senior Jacques Patrick.

The Defense will be a Work in Progress


With only three starters returning from the 2017 season, the new defensive coaching staff has a lot of work to do. The strength of the defense will be along the defensive line, particularly at the defensive tackle position. There will be three new starting linebackers, which is never an ideal situation. Although the secondary lost significant talent to the NFL draft, there’s still plenty of star potential back there with Levonta Taylor and Stanford Samuels III.

Names from Seminole’s Past You Should Know

FSU is one of the most successful programs in NCAA history, and it’s been something of an NFL pipeline for years. There have been over 250 former Seminoles who went on to play in the NFL. Six former players and two former coaches are enshrined in the College Football Hall of Fame, and four former ‘Noles are in the Pro Football Hall of Fame. They’ve had three Heisman Trophy winners over the years.


One of the most successful coaches in the history of NCAA athletics, Bobby Bowden was hired by FSU in 1976. He led the football program until 2009 and along the way he picked up 377 victories, two national titles, and 12 conference championships. Bowden had 33 consecutive winning seasons at FSU and from 1987 to 2000, every Bowden coached squad won at least 10 games.


One of the first high-profile athletes to complete at FSU, Fred Biletnikoff remains one of the most decorated football players of all-time. Perhaps better known for his time as a Super Bowl MVP wide receiver with the NFL’s Oakland Raiders, Biletnikoff played both sides of the ball while at FSU. He held a number of school records for years, including the longest interception return for a touchdown—a record later broken by fellow ‘Nole and Pro Football Hall of Famer Deion Sanders.


Easily the most recognizable of former Seminoles, Sanders was a three-sport star while at FSU. Flamboyant and colorful, Sanders’ play in the late 1980s redefined what it meant to be a cornerback. Sanders also played baseball and ran track while at FSU. He went on to win two Super Bowls in the NFL and play nine years in the MLB.


Another multi-sport star at FSU, Ward won the school’s first Heisman Trophy in 1993. He played quarterback and led the Seminoles to the school’s first national championship in 1993 as well. While at FSU, Ward also played basketball for four years. In 1994, Ward did not pursue a career in the NFL, instead opting for pro basketball. Ward was drafted in the 1994 NBA draft in the first round by the New York Knicks. He played 11 seasons in the NBA before retiring in 2005.

Willie Taggart enters his first year as head coach for a Florida State football program that looks to bounce back from a disappointing 2017 season. With his signing in December 2017 to replace Jimbo Fisher, Taggart became the first permanent black football coach at FSU. Taggert was born and raised in nearby Bradenton, Florida. He played and coached at Western Kentucky, before having head coaching opportunities at South Florida and Oregon. Taggart is an offensive-minded coach and spent time working under Jim Harbaugh as running backs’ coach at Stanford.