The 2020 Thursday Night Football Schedule for the NFL was announced on May 7, 2020. The schedule is highlighted by the appearances of the Super Bowl Champion Kansas City Chiefs in the Thursday Night opener when they host the Houston Texans. The Chiefs play again in Week 6 when they visit the Buffalo Bills.

Please note that all games are scheduled to be played at 7:20 pm CST on Thursday nights. Please note that the ET starts will be at 8:20 pm ET and for PT, it’s a 5:20 pm PT kickoff. 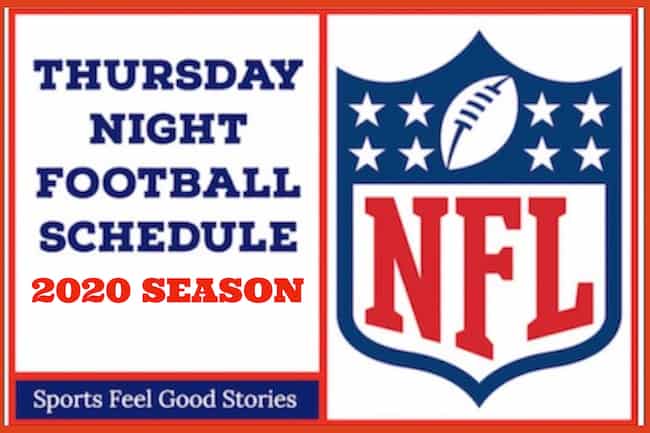 Thursday Night Football games, sometimes abbreviated to TNF, is a little slice of heaven sent down to serious football fans. Back in 2002, the NFL scheduled a Thursday night opening kick-off game after labor day leading into the full slate of games on Sunday.

In 2004, the NFL began awarding the first game hosting duties to the Super Bowl winner. The unfurling of the Super Bowl banner has become a tradition in the opening ceremonies before the game.

Games last about 3 hours or until the game ends.

In its current format, Thursday Night games began in 2006.

Through the years, some fans believe that Thursday night games are of lower quality relative to Sunday and Monday night games. But, a study by Sports on Earth writer Aaron Roberts showed that the games were of comparable or better quality than non-primetime games.

Some players have expressed concerns about playing on Thursday nights after limited rest. But, in 2015 the NFL released a health and safety report that showed that an average of 4.8 injuries occurred on Thursday games compared to 6.9 injuries on games played on Sundays and Monday.

4.) Joe Buck and Troy Aikman will call the games this year for FOX.

5.) Westwood One is the national radio broadcaster for Thursday Night Football games.

6.) NFL player Richard Sherman expressed his displeasure with Thursday night games by calling one a “poopfest.”

7.) According to the NFL health and safety report, Thursday night games result in an average of 4.8 injuries compared to 6.9 injuries for Sunday and Monday games. This was startling to many who believed the short week resulted in more injuries.

The NFL Conferences and Divisions

The conferences are further broken down by divisions. The NFC and the AFC each have 4 divisions: North, East, South, and West. Each division has four teams, e.g. the NFC North’s team include the Green Bay Packers, Minnesota Vikings, Detroit Lions, and Chicago Bears.

How the NFL Schedule is Made

1.) Six games are set against divisional opponents. So, continuing with our example, the Green Bay Packers would play the Vikings, Lions, and Bears twice in one season. One game on the road, and one game at home.

3.) Two games are scheduled with teams from the two remaining conferences not selected in point two above. The teams selected are based on division ranking from the previous year. One game will be a home game and one will be away.

How are Teams Selected for Thursday Night Play

Each Spring the NFL using computers and multiple schedules to come up with the season’s schedule for all 32 teams. NFL schedule makers are looking for competitive games that will capture an audience’s interest. Like MNF, TNF is the only game on NFL teams for that particular date and time. As such, the NFL is interested in putting its best foot forward while also accommodating all of the teams’ interest in playing in such showcase games.

Most Thursday Night Football games feature divisional rivals like the Packers vs. Bears or Chiefs vs. Broncos. When teams are scheduled for Thursday Night games, they will not have to play a short week Thursday more than once per season.

Why Doesn’t the NFL Play on Fridays and Saturdays?

To protect the interests of high school football and college football, the NFL does play games on Fridays or Saturdays during the schools’ seasons. There are exceptions as to when Christmas falls on a Friday.

The oldest NFL rivalry starts off a season full of divisional match-ups. The Packers and the Bears are each featured twice on TNF games this year.

Greg, a Vikings fan, and Mike whose mutual fund of teams include the Vikes, Packers, and Chiefs have been writing about football for over a decade. Mike was a contributing writer to USA Football, the youth football arm of the NFL.

NFL Quarterbacks By the Numbers