You are here: Home / Wrestling Quotes

Looking for some good high school wrestling quotes to motivate a team? Or, maybe some wrestling sayings for your youth team? Below is our collection to amuse, inspire and motivate.

Fatigue makes cowards of us all.
Unknown

Home is where the mat is.
Unknown

The biggest risk in life is not taking one.
Unknown

Potential is interesting.  Performance is everything.
Unknown

You can’t build a reputation on what you could have done.
Unknown 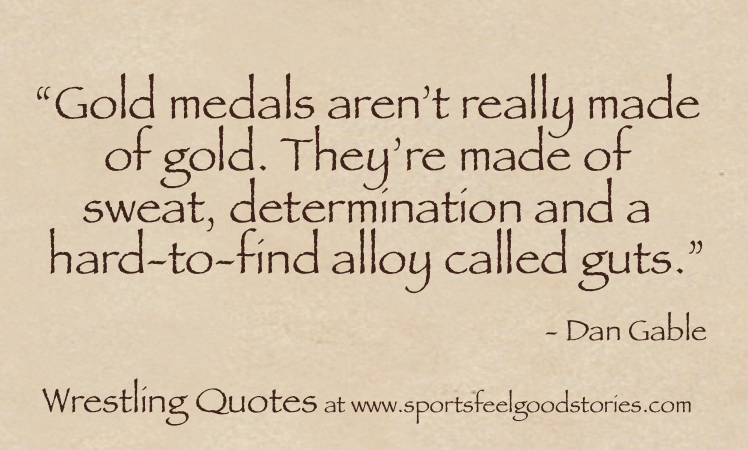 Everything you want is on the other side of fear.
Unknown

Success is not a random event.
Unknown 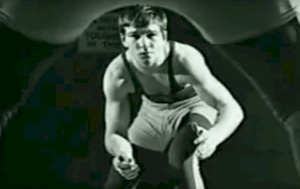 The harder you work, the luckier you get.
Unknown

If we cannot find a way, we will make one.
Unknown

Wrestling begins at the end of your comfort zone.
Unknown

Success is not measured, it is earned.
Unknown

Without sacrifice, there can be no victory.
Unknown

Look in the mirror; that’s your competition.
Unknown

Failure to prepare is preparing to fail.
Unknown

Success starts with believing in yourself.
Unknown

Wrestling is overcoming obstacles. Every drop of sweat, every black eye, and every mile run reinforce that the will to train sets winners apart.
Unknown

Nobody who ever gave his best regretted it.
Unknown

Respect your opponents, but don’t ever fear them.
Unknown

Being defeated is only a temporary condition; Giving up is what makes it permanent.
Unknown

Once you learn to quit, it becomes a habit.
Unknown

Wrestling is a little like wrestling a gorilla. You don’t quit when you are tired, you quit when the gorilla is tired.
Unknown

Mediocrity is as close to the bottom as it is to the top.
Unknown

We don’t rebuild, we reload.
Unknown

Your mom pays me to go easy on you.
Unknown

Champions are people who get up when they can’t.
Unknown

When you go the extra mile, it’s never crowded.
Unknown

He that is good at making excuses is seldom good at anything else.
Unknown

There are no losers in wrestling, only winners and learners.
Unknown

The reward isn’t as good without the struggle.
Unknown

Failure is part of success, but failure will never stand in the way of success if you learn from it.
Unknown

Remember, when you are not training, someone somewhere is training; and when you meet him, he will win.
Unknown

The art of living is more like wrestling than dancing.
Marcus Aurelius

Wrestling is one of the last truly rebellious American things left.
Billy Corgan

No activity I know is more of a confidence builder and at the same time more ‘humility training’ than wrestling.
Congressman James Leach

This is a sport (wrestling) that has turned many boys into men and many men into leaders. And it is a sport in which you can be a giant regardless of how big you are.
Carl Albert, former Speaker of the House

Once you’ve wrestled, everything else in life is easy.

Right out of high school I never had the fear of getting beat, which is how most people lose.

I shoot, I score. He shoots, I score.

The obvious goals were there- State Champion, NCAA Champion, Olympic Champion. To get there I had to set an everyday goal which was to push myself to exhaustion or, in other words, to work so hard in practice that someone would have to carry me off the mat.

You don’t forget about the lower ones though because they can add up to hurt you. Just take care of the top ones first. In 25 years as a head coach and assistant, I think I might have missed one practice. Why? Because practice is my top priority. A day doesn’t go by when I don’t accomplish something in my family life or my profession because those two things are my top priorities.

Wrestling has been a way of life with me day in and day out. I won’t get too far away from it. I might walk through the wrestling room once a week – I could go every day if I wanted. But just walkthrough, make sure it’s still there.

Gold medals aren’t really made of gold. They’re made of sweat, determination, and a hard-to-find alloy called guts.

Wrestling is the only sport I’ve ever competed in that puts you totally in a situation of constant motion without breaks. I could play football or baseball, swim — but there’s always some kind of situation that would break my thoughts, break my concentration.

When you’re in school growing up, you have teachers who sit and read to these kids, and what better opportunity to sit and read a story — one that’s not fake. It’s not a dreaming story – it’s not Harry Potter. It’s a real-life story, with glorious moments to horrific moments, including the frostbite — and what better way to show kids their potential than with a real-life story?
Rulon Gardner

There is enough reality in my life so I try not to read things that have too much stress.
Rulon Gardner

Every day I turned a “you can’t” into a “you can.”
Rulon Gardner

How do you beat an individual who hasn’t been beaten in 13 years? With the help of others.
Rulon Gardner

I grew up on a farm and I always learned when you work you go forward, you don’t stop and say, well, I’ll take a break. You always go forward and get the job done.
Rulon Gardner

Just when they think they know the answers, I change the questions.
Rowdy Roddy Piper

They say I’m insane; I say thank you very much.
Rowdy Roddy Piper

I go out and give it 110% every time I’m out there. I try hard
Rowdy Roddy Piper

You don’t throw rocks at a man with a machine gun.
Rowdy Roddy Piper

I came to chew bubblegum and to kick ass, and I’m all out of bubblegum.
Rowdy Roddy Piper

Do you know what it’s like going through life better than everyone else? It’s hard.
CM Punk

The Rock says, ‘Know your role and shut your mouth.’

If you smell what The Rock is cooking.

The Rock says this, if the Rock hits you he’ll kill you. If he misses, the wind behind the punch will give you pneumonia and you’ll die anyway, so the choice is yours, Jabroni.

Finally, The Rock has come back to (whatever city he’s in at the time).

My favorite thing about Saturday Night’s Main Event, it was that one time where I could stay up late with my dad and four brothers, and we would all beat the tar out of each other while the show was on, and it was all okay because my dad was a wrestling fan.
John Cena — you might like The Make A Wish Legend – John Cena

I don’t doll myself up for TV because I want people to accept me for who I am.

I’m the one person who wears the words “hustle, loyalty, respect” on my T-shirts and merchandise. My audience is children. It’s very flattering to see a kid wear your T-shirt; it’s even more flattering to have a dad come up to you and say, “I watch you with my kid. Keep doing what you’re doing. You’re a role model for my son.”

By the time I was 15 and I stepped into the high school gym, I was just stronger than everybody.

A lot of the stuff that I say don’t even make TV because it gets cut out. So if you’re at the live events you get to hear what I have to say, but if you’re watching on TV, you’re only getting about 50% of it.

I’m not trying to brainwash my critics. If they’re critics, they’re critics, and that’s their job to be critical, but I certainly enjoy the involvement I have with my fans. I enjoy the time I get to spend with them, and I don’t waste time with someone stubborn who is not going to come around.

You’re on the Wrestling Quotes page.

The Miracle on the Mat – Rulon Gardner

Not all superheroes wear capes