Having awesome clan names for Clash of Clans (COC) and Call of Duty (COD) isn’t a prerequisite to play, but maybe it should be?

The Clash of Clans Game was developed by Finland based software developer Supercell. The game was originally released in 2012 and has been going strong ever since. It can be played either single player or multiplayer, and is available for both the IOS and Android operating systems. The massive multiplayer online game is very popular in the world of online gaming.

The expert panel at Sports Feel Good Stories has reviewed hundreds and hundreds of clan names to come up with the most outstanding names we could find. Depending on the type of clan you have, we’re confident you will find just the right name somewhere in this list. Whether you’re looking for a cool clan name of Clash of Clans (COC), Call of Duty (COD) or Fortnite, you’ll find it. So below, in our humble opinion, are the 12 all-time best clan names.

1.) Zombie Clan Busters – The worst nightmare for a clan, a collection of warriors that are very hard to kill and dedicated to busting up your clan.

2.) Immortal Souls – Kind of like zombies, but terrifyingly different. Think about it, how do you kill a soul?

3.) Highland Heroes – Harkening back all the way to Scotland, this kilt clad clan is sure to strike fear in the hearts of other clansmen.

4.) Major Pains – A clan name that just kind of says it all.

5.) Projectile Players – All I can say is if you’re fighting this clan, you had better duck.

6.) Axis of Evil – Yes made famous by President George W. Bush referring to countries that perform terrorist acts and harbor terrorists, but also a clan name that will create a sense of inferiority in other clans.

7.) No Mercy – Talk about intimidating, this clan will hurt you.

8.) Demons of Dispatch – A demon that is out to get rid of you? Now that certainly paints a really grim picture.

10.) Black Knights – Okay, so it’s the nickname of famous professional golfer Gary Player, but in this game, it takes on a whole new meaning.

11.) Boiled in Blood – Just the sound of it gives you chills, and the clan’s blood red eyes bring the message home.

12.) Zero Remorse – A clan name that implies whatever it is they do to you, they don’t care. Think about that for a minute. 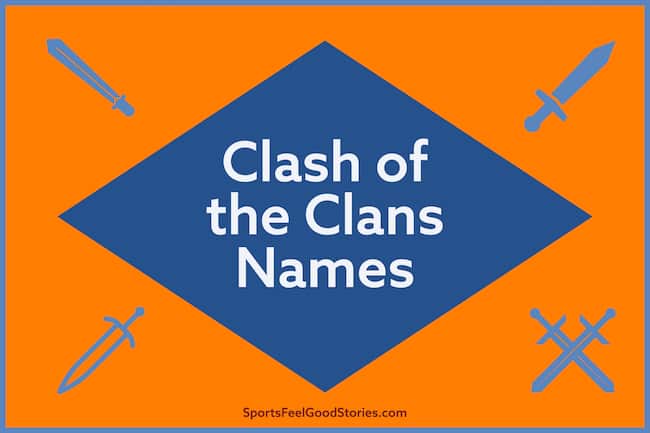 13.) Fighting Farmers – This clan isn’t a bunch of guys with pitchforks, it’s a clan full of axes, sickles, and weed wackers aimed at you.

14.) Gang Green – Yes, it’s a play on words involving gangrene, that’s the condition where human tissue dies, and you can lose fingers, toes, and limbs. Yuck.

15.) Death Salesmen – Arthur Miller (author of the play Death of a Salesman) would probably approve of this clan name.

16.) Violent Vultures – They’re just waiting around for you to die.

17.) Clan of Clash – Would you really want to clash with them?

18.) Men of Malady – A mysterious name that implies that you are going to wind up sick when you clash with this clan.

19.) Firebranders – It’s intimidating, paints a visual picture and let’s other clans know that they are playing with fire.

20.) Fan of Clans – A perfect Fandom name, it not only shows that you are a fan of the game but a fan of the Clans too.

21.) Kung Fu Killers – Known for their trickery and quickness, this isn’t the kind of kung fu you see in the movies, this clan is the real deal.

22.) The Evil Army – Pull no punches with this in-you-face-moniker!

The friends you invite to play with you against other clans are sure to want to join you if you have a memorable clan name. A good calling card puts other clans off guard and while they’re chuckling, your clan is ripping them to shreds.

Check out these Clash of Clans Beginner Tips.

Sometimes we forget that women play Clash of Clans too. So, these devotees need names for their clans. Names that may reflect their personalities, their playing style, their favorite things, or names that are just plain nasty. Women can be just as ruthless as men and twice as sneaky (this is meant as a compliment). We have complied a list of good female clan name ideas. We hope you like it:

Everyone wants to be cool, that guy or gal who wears sunglasses inside or at night, now that’s cool. Coming up with the right naming choice can be a little more difficult. You want something that may be a little funny but, you also want a name that says hey you, look at me, that’s right I’m talking to you. The cool guy or gal that everybody stares at when you’re walking down the hall in school. To help you in your search for a cool clan name, we’ve assembled the list you see here:

130.) Clan Nation – Just like the MLB “Red Sox Nation,” Clan Nation says take my clan seriously because we are going to dominate.

131.) Mad Scientists – You just want to do battle with a clan with a name like this.

132.) The Art of Pain – This name says two things; one, we are a creative and artistic clan and two, we are going to inflict pain on you.

133.) Plague of Locusts – Nothing like a huge swarm of grasshoppers to get your attention.

134.) Horrible Mistakes – Is this a bumbling clan or a clan that is sly as a fox?

135.) Vicious Vikings – In artistic depictions, Vikings always look pretty frightening add in the term vicious and you’ve got the makings for a classic clan name.

136.) Hands that Hurt – Simple, visual, and guaranteed to make your brow sweat.

137.) Clan of Carnage – The dictionary defines carnage as the slaughter of a great number of people, as in battle, butchery, and massacre. Enough said.

138.) Destroyers – Simple and direct to the point.

It seems like an easy thing to do but, coming up with a good clan name isn’t always that easy. You must think about the type of name you want, the message you want your clan name to send, and how to make the name unforgettable. A great selection means you’ve thought a lot about it, and you’re committed to this name. Here is a carefully considered list of good clan names:

The Game: Clash of the Clans

In the game, players are the chief of a village and they are tasked with creating and building their own town from the ground up. Players can work alone or together to form clans.

Clans are groups of up to 50 warriors that participate in Clan Wars with rival clans. The clans train together, can be upgraded, and are judged on their abilities to wage war. Players also build buildings that can be defensive in nature or be offensive and involved in an attack on another clan.

Clan names started in Scotland and clan comes from the Gaelic clann which means progeny or children. The word was introduced into the English language in approximately 1425. The clans reflected the lifestyle of the people living in the Scottish Highlands at the time.

The formation of a clan was based on kinship and family and the clans could be very powerful politically. Clans differ from tribes or bands; however, they can also be part of a tribe or band. Clans existed in Scotland, Ireland, Norway, China, Korea, and Japan. Clans even existed in America and the late 1800’s feud between the Hatfield Clan and the McCoy Clan is infamous.

The Clan names in Clash of Clans should evoke power and intimidation but also be cool and maybe even a little funny. Classic Clash of Clans names include Tears of Gaia, Martial Warlocks, and Gift of Prometheus.

How to Change Your Name in Clash of Clans

To change your name on Clash of Clans, here are the steps:

2.) Identify and select the button that looks like three gears.

Remember that you can only change your name once, so make a good choice. Hope that helps.

Tim Moodie has spent over 30 years in the toy business as a designer, developer and inventor. During these years, he has worked on and created toy and game names like Rap Master Microphone, Street Beats Jam Van, Dueling Dice, Firebrand, Bad Eggz, Trivia Bingo, The Act Like A Dog Game and more. He is responsible for naming characters like Wes Champion, Anne Fisher-King, Dr. Jennings Hyde, and Jean Splicer for the children’s’ cartoon program Firebrand.

Winning the Name Game feature: How to Name Your Squad